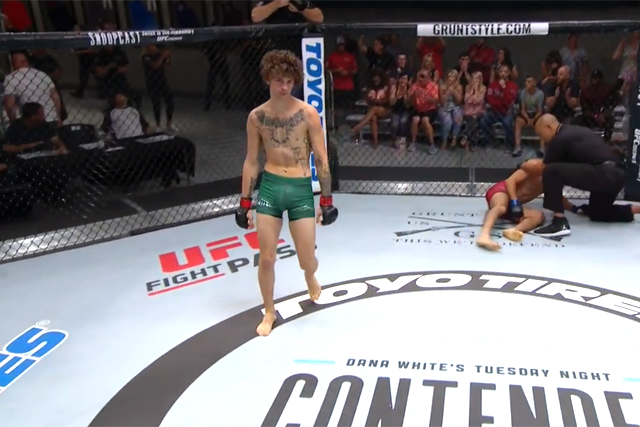 Will Sean O’Malley Get a Signature Win at UFC 276?

Sean O’Malley faces Pedro Munhoz in the opening fight of the main card at UFC 276 this weekend. Despite being ranked outside the top 10 of the bantamweight division, O’Malley has already become one of the biggest stars in the UFC. This Saturday, he faces one of his toughest tests to date in the perennially ranked contender Pedro Munhoz. Will he be able to secure the signature victory of his career?

O’Malley heads into UFC 276 with momentum behind him, having won three fights in a row, all by stoppage. Munhoz, on the other hand, has struggled, as of late, losing four of his last five bouts. It must be taken into consideration that these losses came to three former world champions, as well as the current bantamweight champion Aljamain Sterling.

Munhoz seems to be in the midst of a decline and appears to lack the sharpness that he once had. In those aforementioned defeats, Munhoz seemed to struggle with the hand speed and mobility of his opponents. These are two of O’Malley’s strengths and, as a result of this, many believe that Saturday is a perfect opportunity for the 27-year-old to make the biggest statement of his career.

O’Malley’s superior technique, speed and substantial height and reach advantages should enable him to avoid danger against the hard-hitting Munhoz. The Montana-born athlete is adept at drifting in and out of range and keeping his opponents on the outside. As he demonstrated during his beatdown of Kris Moutinho, O’Malley can sustain a high volume for prolonged periods. Munhoz’s front-foot, high-pressure style seems like it could play perfectly into O’Malley’s counter-striking game. In the Moutinho contest, O’Malley landed a barrage of strikes whilst on the back foot. Munhoz had issues with the constant movement of Dominick Cruz and he could feasibly encounter the same problems against O’Malley.

The stylistic match-up of this contest does seem to indicate that O’Malley is favore,d but there are some obvious threats that Munhoz possesses. One of these is his leg kicks. Throughout his career the Brazilian has utilized hard kicks to damage the lead leg of his opponents. In his bout against Rob Font, Munhoz landed a kick which buckled the legs of Font. Munhoz then quickly backed Font up against the fence and landed some punches that wobbled him. This forced Font to level-change, seemingly out of desperation to try and survive in the contest. Munhoz quickly cinched in his trademark guillotine choke which caused Font to tap out.

O’Malley has suffered two leg injuries during his tenure in the Octagon. The most recent injury occurred when the 27-year-old received a kick from Marlon Vera, which contributed to O’Malley suffering a TKO loss – the only defeat of his career. This suggests that he may be vulnerable in this area, and it could be exacerbated against a powerful leg kicker like Munhoz. O’Malley has already stated that he expects Munhoz to implement a kick-heavy game plan. It is imperative that O’Malley evades these kicks, to not only avoid another injury, but to prevent Munhoz from inflicting the type of damage that could turn this into his type of fight. The 35-year-old will almost certainly want to keep proceedings at close quarters, where his immense power and durability give him the edge over most, if not all bantamweights.

Munhoz is a black belt in Brazilian jiu-jitsu and has more wins by submission than by knockout or decision. In spite of this, he very rarely attempts takedowns, which could allow him to fully exploit his submission skills. The 35-year-old seems to enjoy having striking battles, which is perhaps to his detriment. His refusal to mix things up when he was clearly second best on the feet against both Jose Aldo and Dominick Cruz seemed puzzling. Aldo is renowned for his outstanding defensive wrestling, and Cruz is a proficient wrestler himself. This could have deterred Munhoz from engaging in the wrestling. O’Malley’s relative inexperience may persuade Munhoz to adopt a different approach in this department.

O’Malley has displayed solid takedown defense thus far in the UFC. The majority of the takedowns against him in the Octagon took place in the third round of his bout against Andre Soukhamthath, after he had suffered a foot injury. When he was taken down by Soukhamthath, he had a very active guard. If O’Malley is taken down by Munhoz, he could employ the same strategy and threaten submissions off his back to deter the Brazilian from taking the fight to the ground.

O’Malley has been criticized for electing to have a slow path up the rankings. Despite having won all but one of his eight main roster UFC contests, he is yet to face a ranked opponent. His reasoning for this has been wanting to get paid more before he faces the upper echelon of the division. He fell short the first time he faced a step up in competition against Marlon Vera, albeit with the fight ending following O’Malley’s leg injury. The 27-year-old’s penchant for showmanship and trash-talking in addition to his slow rise up the ranks, has contributed to him becoming a target for criticism. If O’Malley does not emerge victorious on Saturday, his detractors would be vindicated and it would re-affirm the feeling for many that his hype has been unwarranted. However, if he can defeat Munhoz on what is likely to be the biggest pay-per-view of the year, O’Malley will finally prove that he belongs at the highest level.