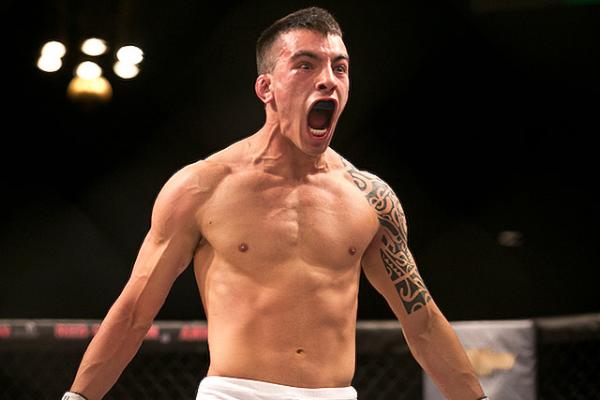 Legacy Fighting Championship: A Catapult to the Big Leagues

Legacy Fighting Championship has become synonymous with exciting fights and bright talent. What started out as humble beginnings to bolster readership for their newspaper, Mick and Andrea Maynard found a new passion in bringing mixed martial arts to the public, starting out with a small, university-based show called Lonestar Beatdown, which would serve as their training ground in the fight game.

Lonestar ran for 19 events and received high praise from spectators and fighters, so much so that the Maynards knew it was time to throw everything into their new business venture and take it to the next level. Leaving their newspaper behind, they began focusing solely on what would become Legacy FC.

Since its inception in 2009, Legacy has risen to become one of the leading regional promotions, a fact that did not go unnoticed by AXS TV, a cable network with a heavy interest in broadcasting fights as part of its Friday Night Fight Series. The deal commenced initially under the HDNet banner, which aired Legacy FC’s first nationally televised show in 2011. The network was then rebranded as AXS TV. From six fights in 2012 to 12 in 2015, the partnership between AXS and Legacy has grown insurmountably with 15 shows anticipated in 2016 and exposure that has led to events in Louisiana, Atlanta, Oklahoma and Texas.

Legacy was also featured on the highly promoted new show of UFC President Dana White. The first episode of Looking for a Fight captured Sage Northcutt’s stunning submission victory and resulted in the 19-year-old’s recruitment into the UFC, where he is currently undefeated through two fights.

There are obvious windfalls to being a gateway into the UFC, but it’s not a perfect scenario either.

“It is a double-edged sword,” Maynard told Combat Press. “If we had the ability from a financial standpoint to keep our stars, we would have a pretty amazing roster. But we do get a lot of satisfaction helping the fighters to fulfill their dreams. It has become our role to be a catapult to the big leagues and we embrace that role.”

There are several big names that have emerged from the Legacy roster and find success in the UFC.

Topping this list, of course, is Holly Holm. The current UFC bantamweight champion made her debut for Legacy in 2013 with a head-kick knockout of Allanna Jones in a sign of things to come. Holm went on to fight twice more for the promotion, including a scrap for the vacant bantamweight title against Brazilian Juliana Werner which she won via TKO early in the fifth round. Holm signed a deal with the UFC in 2014 and, despite what many consider to be a conservative start, has won all three of her fights on the big stage, including a bantamweight title fight against long-reigning champion Ronda Rousey.

The list also includes Thomas Almeida. The undefeated bantamweight, whose record stands at 21-0, is one of the most exciting fighters on the UFC’s roster. Almeida made his Legacy debut in 2012, taking three fights in total, including a bantamweight title fight against Caio Machado which he won via first-round stoppage. At only 24 years of age, this knockout superstar has risen to the top 10 in his division and will no doubt be a force to be reckoned with in the UFC’s bantamweight ranks.

Henry Cejudo is also a Legacy alum. The Olympic gold medalist wrestler is undefeated in the flyweight division and is considered to be the top contender to face UFC champ Demetrious Johnson. Cejudo made his debut for the promotion in 2013 before being picked up by the UFC in 2014.

There’s also Tim Means. “The Dirty Bird” made his UFC debut in 2012, but a series of losses in 2013 sent the welterweight to the chopping block. Means looked to get his career back on track by fighting on the Legacy FC 23 card and won with an impressive TKO finish of Pete Spratt. He had one more fight with Legacy before making his way back to the UFC. An impressive “Performance of the Night” on the UFC Fight Night 80 card against John Howard has certainly put this welterweight back on the map.

Other notables who made a stop at Legacy before moving to the Octagon include Valentina Shevchenko, Kamari Usman, Sage Northcutt and Damon Jackson.

With belt holders and undefeated fighters being the prime target of the UFC, Maynard believes the winner of the upcoming contest between Augusto Mendes and Ricardo Ramos will likely get the next call up. So, where does that leave Legacy? Thankfully, relationships born and built over the last decade with gyms and management teams have ensured that the promotion is at the top of the pecking order for talent wanting to get noticed. Furthermore, investment into the amateur scene, with 21 events and counting, means that Legacy has created a platform for young up-and-comers to hone their skills before performing as part of the professional promotion. It’s a savvy business move, and a credible one considering the limited resources and events that support amateurs in the United States.

Legacy’s biggest rivals within the AXS family are the Resurrection Fighting Alliance and CES MMA. When eyeballs are up for grabs, it is important for a promotion to distinguish itself. Maynard believes this comes down to two things that Legacy has worked tirelessly to perfect: matchmaking and entertainment value.

“We have managed to combine a lot of talented prospects with more well-known, household names to create a great event,” said Maynard. “I truly believe we have the most exciting promotion in the world. I would bet we have the highest finishing rate of any event.”

His sentiments ring true with Legacy finishing 2015 with a whopping 92 stoppages over 12 events. AXS counterparts CES MMA and the RFA had 110 combined over 17 events (12 RFA shows and five CES shows).

With another big year on the horizon, one thing is certain: Legacy FC will continue to bring the fights fans want to see and cement its position as the breeding ground for young champions making their way onto the world’s biggest stage. That’s a pretty big feat for something that started off as a promotional tool for a newspaper.