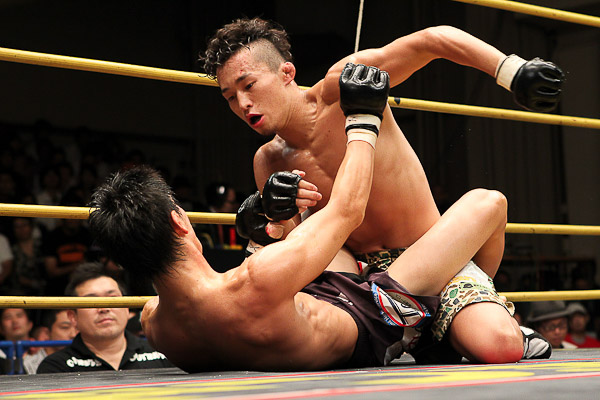 The heavyweight division in general is a very shallow weight class. The Legacy Fighting Alliance might provide it with a little more depth this Friday when it hosts its 38th event. The evening’s headliner features the league’s heavyweight kingpin, Jeff Hughes. Hughes puts the strap on the line against Maurice Greene.

The 29-year-old Hughes took his time getting to the pro ranks. He fought extensively at the amateur level, with a recorded career that began in 2007 and extended all the way into 2013. Along the way, he did suffer three losses, but those defeats came to future King of the Cage title challenger Nick Gaston, future The Ultimate Fighter 19 cast member and UFC fighter Mike King and undefeated amateur Antwan Phillips. Meanwhile, he claimed 11 amateur victories while mostly fighting for the NAAFS promotion. “Lights Out” finally made his pro debut in 2014, also under the NAAFS banner, and made quick work of Devon Wilson. He continued his streak of stoppages into 2015 with two finishes via strikes. His fourth pro victory came against Curt Lemmon, who pushed Hughes to the three-round limit. He stepped up in competition from there and handed a knockout to veteran Jason Riley and decisioned John Hawk. Hughes faced his only pro setback when he fell via technical knockout against another TUF 19 alum, Dan Spohn. The Ohio-based fighter, who happens to train alongside UFC champ Stipe Miocic, rebounded with a decision victory over Ryan Pokryfky and then outworked Richard Odoms in November to grab the LFA title.

The 31-year-old Greene might be two years older than his opponent, but he has less MMA experience. That’s because “Moe the Pirate” has also ventured into the kickboxing arena. The former high school wrestler has even made four appearances with GLORY Kickboxing, but he only has one win to show for his efforts. Overall, Greene’s kickboxing record sits at 4-4. In MMA, he’s won five of his six fights, but he’s been competing at this level since 2012 and rarely made more than one appearance per year. In 2017, he finally fought twice in the same calendar year, and he won both fights by first-round submission. His only setback in the world of MMA came in a decision loss to Dan Charles, who would go on to make numerous appearances under the Bellator banner.

Hughes is a heavyweight who has lost a few fights at the amateur level and hasn’t always looked dominant as a pro. He fights with his hands low and was punished in his sophomore outing before outlasting Leviticus Roberson, who failed to answer the bell for the third round. He’s already suffered two losses to TUF 19 fighters who never really made a mark at the pro level. His biggest wins, meanwhile, came against Riley, a journeyman Strikeforce veteran who entered his bout with Hughes on the heels of a five-fight stretch in which he had won just one fight; Hawk, who had not been able to stick with the Bellator promotion despite a 2-1 mark within the company; and Odoms, who checks in at 42 years old.

Greene prefers the striking disciplines, but he’s actually looked far better overall in MMA action than he has in the kickboxing ring. Surprisingly, only one of his MMA victories came via knockout — it was a quick 25-second decimation of Zach Thumb — while he has three first-round finishes by way of choke submissions. Greene seems to be more focused on MMA these days, and a home in the LFA gives him more stability than many of his previous MMA stops, which have featured numerous opponent changes. He had four potential opponents scrapped across two events immediately prior to his loss to Charles, which could explain his performance in that fight.

One significant factor in this contest is Greene’s immense size. He’s listed as 6-foot-7, and GLORY even pegs him as 6-foot-9. Hughes measures just 6-foot-2. Greene’s likely to enjoy a big edge in reach, and his combination of kickboxing and wrestling experience gives him a unique set of skills to use against the champ. Greene’s made a habit of overwhelming opponents, and Hughes doesn’t seem like a huge obstacle for the kickboxer. This should be over in the first round, ending with an explosive knockout finish by Greene over a fighter who has been dropped at both the amateur and pro levels.

The 29-year-old Wada has been a fixture of the Japanese MMA scene since his 2008 debut with Deep. He had a rough start that included losses in his first five fights. Wada has actually gone a much more impressive 18-3-2 since righting the ship. He failed in a bantamweight title bid against Yoshiro Maeda in 2012, but found gold at the flyweight level with a victory over Yuki Motoya the following year. Just two fights later, he lost the crown to Motoya, but he rode a streak of four stoppage victories to receive another title shot. In his bid for the vacant flyweight belt, Wada decisioned Yuya Shibata. He’s since gone on to make two non-title appearances, including a winning effort over The Ultimate Fighter 24 alum Kaiwhare Kara-France under the Rizin Fighting Federation banner. Wada, who has a background in karate and judo, also holds notable wins over Daiki Hata, Takafumi Otsuka and Ryuichi Miki.

Takahashi is a very young title hopeful. The 17-year-old made his pro debut when he was still just 16. He took unanimous verdicts in his first three fights before going to a majority draw against .500 fighter Yasutaka Ishigami. More recently, the teenager has upped his level of competition while continuing to win. His last three victories came against a set of opponents who held a combined 20-14-1 mark heading into their meetings with Takahashi. The youngster trains out of Paraestra Matsudo, which is the same camp that has produced Kanna Asakura and Yoshitaka Naito.

Wada has been a top fighter since shifting his focus to the flyweight division. He has years of experience, and he’s posted some strong efforts against tough competition. The veteran has five knockouts and four submissions, but he has also been knocked out once and lost three fights by submission.

Takahashi has a bright future ahead of him, but there’s a big difference between Wada and the likes of previous Takahashi foes Yuto Nakamori, Hiroki Yamashita and Kota Ishibashi. The 17-year-old is not quite ready for this type of jump. He barely edged past Nakamori in a competitive fight, and he only managed a split verdict against Ishibashi, whose record was 8-8-1 coming into the bout. Wada will provide the teenager with a valuable learning experience as the youngster continues to grow as a fighter. Wada should outwork Takahashi and earn the decision.

China’s Rebel Fighting Championship organization finally seems to be gaining some momentum. The league held its inaugural event all the way back in 2013. It managed two events per year through 2015, before slipping to just one event. In 2017, the promotion again promoted two cards, and this is already its second show of 2018. It’s not too shabby, either. The lineup features such notables at Rodolfo Marques and Akihiro Gono, but homegrown talent Jumayi Ayideng takes center stage. Ayideng puts his bantamweight title on the line against Japanese fighter Shuhei Sakano.

The 26-year-old Ayideng made his pro debut in 2011. He had an up-and-down start, but his first two losses came to the same fighter, South Africa’s Irshad Sayeed. His only other loss was a knockout at the hands of South Korean Seung Gu Kim. Meanwhile, Ayideng has posted promising results with victories over The Ultimate Fighter 24 alum Kaiwhare Kara-France, Paata Robakidze and Chris Morris. The fight with Morris was a title-clinching effort for Ayideng. The Chinese fighter tallied two knockouts and six submission victories early in his career, but he’s gone the distance in his six most recent wins.

The 22-year-old Sakano once went on a streak of four straight draws. That stretch came early in his pro career, which kicked off in 2014. The well-traveled Pancrase, ZST, Deep and SWAT! veteran has fed primarily on low-level competition. In fact, the men he defeated held a combined 17-22-12 entering their fights with him. Likewise, the draws came against a group that held a combined 6-12-15 record. Then, we get to his losses — his opponents entered those fights with a combined 18-8-4 mark. On a positive note, Sakano has scored finishes in all of his victories. He has six submissions and four wins by some form of knockout.

Sakano’s record might look good at first glance, but it dulls with a little more digging. In 2015, he was submitted by Takao Ueda, who was 9-4-4 at the time and now sits at 12-7-4. The next year, he dropped a decision to Kaito Sakamaki, who was 8-4 and now stands at 14-7. Finally, in 2017, he lost a split decision to Mitsuhiro Taki, who was 1-0 and now holds a 2-1 mark. The Japanese fighter can finish inexperienced and sub-.500 fighters, but he can’t put it together against even a slightly above-average fighter.

This seems like the perfect setup to showcase Ayideng in front of his fans. The Chinese fighter has beaten more seasoned and talented opponents than Sakano, including one who has flirted with entry into the UFC. Sakano shouldn’t prove to be a huge threat to this rising star. Ayideng has been more conservative since his stunning loss to Kim, so this might end up going the distance before his hand is raised.