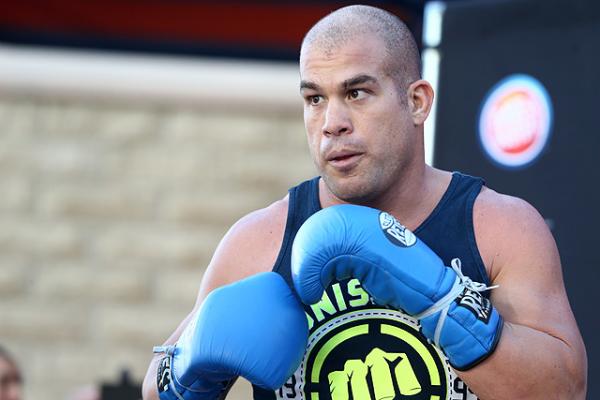 It’s 2017 and Bellator MMA is making its first appearance of the new year with Bellator 170 at The Forum in Inglewood, Calif.

The main event of the evening takes place in the legend’s division… er, the light heavyweight division, where Tito Ortiz takes on a fellow UFC veteran Chael Sonnen. The two men have a supposed grudge match going on dating back to a collegiate wrestling match won by Sonnen. They never crossed paths in the UFC — or even came close, for that matter — but they will finally collide in the Bellator cage, and Ortiz will likely call it a career at the end, win or lose.

The co-headliner features two guys at the top of the welterweight division looking to get into title contention. The exciting Brennan Ward and Paul Daley will battle it out to see who will continue their rise back up the ranks.

In the middleweight division, Ralek Gracie comes stateside to face Hisaki Kato in what should be a good test to see where Gracie ranks among the Bellator middleweights. At featherweight, Emmanuel Sanchez would like to bounce back from a split decision loss to Daniel Weichel, but former World Series of Fighting featherweight champion Georgi Karakhanyan stands in his way. Bellator 170 will also serve up lightweight action on the main card when Bellator veterans Derek Campos and Derek Anderson enter the cage.

It’s a completely meaningless fight with no real ties to anything in the future. That is pretty much a given. If Sonnen loses, then he can’t turn this fight into a possible launching point to a light heavyweight title shot against Phil Davis, who would dominate such a fight from start to finish.

Obviously, enough people care since Bellator is not only making this the main event, but throwing a lot of promotional material behind it to back it up. If people didn’t care, then Bellator would certainly be putting all of its eggs in the wrong basket. It also bears mentioning that Ortiz is coming off a title fight where his name was used to boost Liam McGeary’s stock as a legitimate light heavyweight. McGeary lost his next fight where he was absurdly overmatched against Davis, but Ortiz’s name still has some ring to it that prompts fans to tune in to a fight.

There is a reason Bellator signed Ortiz and have pretty much exclusively used him to help make a big event. Sonnen, meanwhile, can talk anybody into watching his fights. The man just oozes charisma, which makes up for Ortiz’s huge lack of ability to sell a fight with his oft-mangled words. Sonnen has single-handedly been selling this fight, even to those who likely don’t care about their wrestling match that happened eons ago. I’m just generally interested to see if Sonnen can back up the talk.

It’s a guilty-pleasure fight at the end of the day. Some people will tune out specifically for this reason. But to say nobody cares is a stretch that I can’t agree with. Some people will inevitably care, but if they deny this fight is a match of two men well past their primes and is nothing more than a glorified WWE-like storyline fight, then they’re delusional.

Brennan Ward appeared to be marching toward welterweight title contention before his hopes were derailed by Evangelista Santos. Ward rebounded with a huge stoppage win over Saad Awad. Can he keep his momentum alive against Paul Daley?

This fight is perfect for both guys. Daley and Ward like to fight and will trade blows until their opponent falls over. Daley is a big step in the right direction for Ward if he wants to get back into the title picture. While Awad isn’t a bad addition to Ward’s resume, Daley is a UFC veteran who has been rather successful in Bellator’s welterweight division.

Ward has more avenues to win this fight. While Ward would probably prefer to stand with any fighter he takes on, his big advantage comes on the ground against Daley. If Ward approaches this fight like he approached his bout against Santos, then we might have a quick end to this fight yet again as Daley adds a flashy knockout to his highlight reel.

Ward needs to remember that Daley isn’t known for his grappling abilities, and his preference has always been to keep the fight on the feet and land the knockout blow. There are a couple of exceptions to this rule, but they’re just exceptions. Daley doesn’t ever look to bring the fight to the ground, where he has lost big fights before. Ward has an excellent chance to win this fight if he uses his wrestling. Daley’s takedown defense has improved, but it still leaves something to be desired.

Ward can’t get drawn into a firefight with Daley. It just isn’t a smart option. Ward could probably hang and win the fight on the feet, but the chances for a loss also increase. Ward has far greater odds to end the fight on the ground instead.

This card features plenty of fighters who are undefeated through their first two or three fights, including main-card fighter Ralek Gracie. Are any of these prospects bound for big things in Bellator?

It’s hard not to look at Gracie and think he’s bound for big things. His last name is Gracie, after all. While the shine of that name has been diminishing in recent years with the family failing to find success in the UFC and elsewhere, Ralek is certainly a man to watch. However, Bellator isn’t doing Gracie any favors in his first fight stateside against Hisaki Kato, who has become best known as Joe Schilling’s kryptonite.

Kato’s victories have all ended by knockout. If there is one obvious flaw with the Gracie family, it’s that they aren’t known for their striking. That makes this a very dangerous fight for Ralek. Kato hunts for the knockout. He has beaten some great strikers on the feet, too.

If Gracie gets through Kato with a victory — let’s say a submission — then things look good for his future prospects. This isn’t going to be an easy debut, but it can certainly help charge Gracie for another big test at middleweight. It’s hard to say at this point if he can make big things happen in Bellator. Middleweight is a good division for him, though, since it isn’t stacked. This provides ample opportunity for anybody to ascend the ranks.

Same thing goes for the undefeated undercard fighters. This is a good chance to impress, but at a young stage in their careers it’s hard to say how far they can rise. The A.J. McKees of the MMA world only pop up so often.

Gabriel Green is the one fighter that stands out the most. His last fight was at Bellator 160, where he posted an impressive knockout performance in only his third professional fight. Green is 23 years old and switches between the lightweight and welterweight divisions. Both divisions are pretty deep in the Bellator organization, so it will be interesting to see if Green can navigate the waters safely to contend for the title. Age is on Green’s side.

The best part about this fight is that we may see something very wild. Karakhanyan is great at finishing fights. He has 14 submissions under his belt and is coming off of two great knockouts that have formed his current two-fight winning streak. Karakhanyan was one of the top featherweights in Bellator. He was extremely close to fighting for the title before suffering losses to Daniel Weichel and Pat Curran.

This fight has a lot of top-tier implications, too. Sanchez is another fighter teetering around the upper portion of the division. While Karakhanyan is known for the finish in Bellator, Sanchez has been the opposite in his last four fights. He rode a three-fight winning streak of very close fights with a split decision victory in each. That all ended when he faced Weichel and fought to his fourth consecutive split scorecard. Sanchez was on the losing end against Weichel.

We could see a wide range here, and the uncertainty is great. Sanchez has looked good so far under the Bellator banner. He could get a big signature victory over Karakhanyan. Conversely, Karakhanyan could use Sanchez as a jumping-off point to get back into title contention and place himself in a No. 1 contender bout.