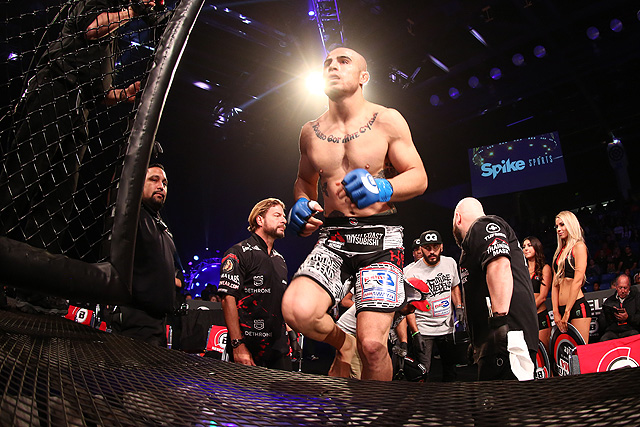 No matter how far mixed martial arts has come in the last 25 years, there is never a shortage of crazy things that can happen. In some ways, the sport has gone through some digression. Between out-of-cage melees and shady promotions, the old MMA days rear their ugly heads from time-to-time.

Russian-born Georgi Karakhanyan, 33, is a 39-fight veteran of the sport. He has had two stints in Bellator, and he has also graced the cages of the World Series of Fighting and King of the Cage promotions. Karakhanyan even held and defended the Tachi Palace Fights featherweight belt seven years ago. Through 28 wins, eight losses and one draw, he thought he had seen every possible ending to a fight, except for a loss of his own by submission. However, leave it to a promoter to bring a new level of craziness to the game.

Karakhanyan recently came off two fights in a row under ACB, a promotion that already comes with its own ugly connotations. His first fight with the controversial organization ended in a unanimous-decision win in his favor, but the second fight was a weird one. The first round was a back-and-forth battle between with his opponent, Timur Nagibin. As the round was winding down, Karakhanyan sunk in a choke. Things took a strange turn from there.

“I was telling [referee] Herb Dean to check [Nagibin’s] hands to see what was going on,” Karakhanyan told Combat Press. “Herb Dean decided to stop it, so he put his hands on his back and my back, so I let go of the guillotine. I asked Herb Dean what was happening, and that’s when the bell rang and my opponent punched me in the face. I was out, and when I woke, I was just wrestling my corner. And next thing I know, they’re saying the fight is over. A few of the medical staff asked me if I wanted to fight, and I said I’m not fighting him.

“Even after the fight, the medical staff gave me a shot, IVs — I don’t know what kind of shot they gave me in Russia, but I had to do all that stuff. I went to get my check, and the promotion thought I should have fought. They said if they had any other fighter, he would’ve fought — that they don’t care and that they can overturn it, which they did. I don’t give a fuck, man. I came out with two wins from Russia, and as far as I’m concerned, my record is 29-8-1. I thought being in my home country, they would take care of me, but I don’t think Russia ever changed. It’s still under control by all those Chechens, and it sucks.”

Anything can happen in this game, even to a seasoned veteran like Karakhanyan. The promotion overturned a Karakhanyan win by disqualification to a no-contest, but most industry professionals agree that it was a win in his favor. The video of the event clearly shows Dean stopping the fight, and as he was speaking to Karakhanyan, the bell rings and Nagibin throws a cheap left hook to the center of his face when he’s not even looking, knocking him out. Any legitimate commission or promotion is going to keep this as a disqualification. The California resident has decided to move on.

For his 40th fight, Karakhanyan will be back in action on Friday night at Bellator 218 for his third stint with the promotion. It will be good to be back with the promotion where he has spent much of his career. Through a turn of events, he will now headline the show in Thackerville, Okla., against a familiar foe.

“When I signed with Bellator, I got a call to fight John ‘Macapa’ [Teixeira] on a three and a half week notice,” Karakhanyan said. “Two days later, they told me the main event fell apart, and they think I should fight [Emmanuel] Sanchez. I was freakin’ excited, and so it happened really quick.”

Karakhanyan first faced Sanchez at Bellator 170 two years ago. In a hard-fought, three-round war, Sanchez took the majority decision as a slight underdog.

“The original main event with [Ashleigh] Grimshaw was boring,” Karakhanyan said. “I’ve been with Bellator several times. I have a bigger name and a bigger following. It’s going to be an exciting fight. I come forward, [and] he comes forward, and it’s a great fight for a main event, man.

“He tries to play games with you, throwing awkward kicks. I just need to stay composed — pretty much what Patricio [‘Pitbull’ Freire] did to him, you know? He was composed, stayed in the game, and was focused. [Sanchez] doesn’t have one thing you need to watch for — he has several.”

When Sanchez faced Karakhanyan at Bellator 170, it turned out to be his first win in a four-fight streak. Sanchez’s last fight against Freire was for the promotion’s featherweight title, but he lost by unanimous decision. While Karakhanyan would like to emulate that winning strategy, he wants to finish the fight early, as he has done many times in his long career. He will be more than prepared, too.

Karakhanyan trains out of the Treigning Lab in California under the tutelage of head coach Sam Calavitta. His training partners include veterans like Cub Swanson, T.J. Dillashaw, Saad Awad, Juan Archuleta and Arnold Jimenez. When he is not at home taking care of his family, Karakhanyan is taking care of business in the gym.

“I’m one of those guys that trains year-round, no matter what,” Karakhanyan said. “I’m in the gym helping the guys get ready, or I’m in the gym improving myself.

“I am in the zone, man. I’ve been training, and I actually can’t wait. [Sanchez and I] fought each other in 2017, and I’m ready to finish him in this one. I’m a totally different fighter. I’m excited to prove it, and I can’t wait to go out there.”

Karakhanyan cannot change what happened in the past. He’s had his win money unfairly withheld from him, and he was even released by the last organization to employ him. However, it all landed him back in a much better place. On Friday night, he will return to the Bellator cage to serve as the main event in a rematch against a guy that last challenged for the title. Crazy things can happen, and maybe this crazy turn of events will even lead Karakhanyan toward the Bellator title.