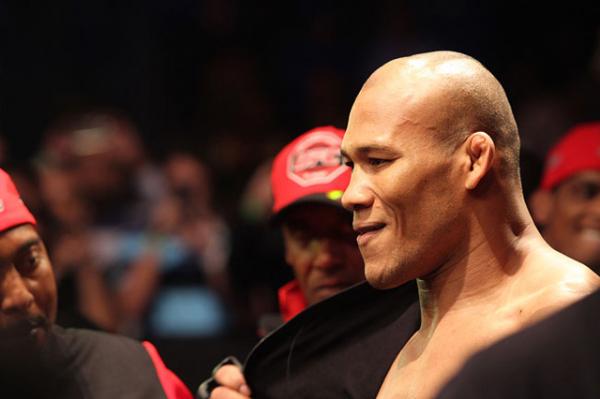 UFC 208 is fast approaching, which means among crowning a new champion and witnessing Anderson Silva compete in the Octagon, fans will also witness the return of Ronaldo “Jacare” Souza.

Jacare will finally step back in the Octagon after a considerable amount of time on the sidelines. We haven’t seen the Brazilian Jiu-Jitsu ace since UFC 198, where he picked up a TKO stoppage over MMA legend Vitor Belfort. It was a nice bounce-back showing from Jacare, who was coming off his first loss since 2011. Considering he lost a questionable split decision to fellow top middleweight Yoel Romero and trounced Belfort, Jacare appeared primed for big things to close out 2016.

Except then he didn’t. First, there were rumors of Souza and newly crowned champion Michael Bisping being paired together. However, those rumors fizzled when Bisping decided to seek revenge on his UFC 100 loss to Dan Henderson. The Brazilian was then paired up with former UFC and Strikeforce champ Luke Rockhold. It was a fun potential fight in so many ways, considering the amount of growth both fighters have shown from their first encounter. Souza’s run of bad luck continued, however, when Rockhold had to pull out of the contest due to an injury.

The lack of an opponent left Souza on the sidelines for the remainder of 2016 and forced his management to put out an ad online in the hopes of finding someone willing to step into the cage against Jacare. One man was finally willing and able to step up: Tim Boetsch.

Boetsch is riding a two-fight winning streak and has been a mainstay in the UFC’s middleweight division since 2011. He’s by no means a walk in the park for anyone he’s facing. Yet, Souza figures to be the night’s biggest favorite in a fight that makes very little sense.

For Boetsch, it represents a tremendous jump in competition. His wins over the late Josh Samman and Rafael Natal are great for someone in the mid-tier of the UFC’s 185-pound division. However, there’s nothing mid-tier about Souza. The Brazilian is widely regarded as one of the best grapplers on the planet, both in MMA and in BJJ, and has progressed his striking game to fully complement his ground skills.

On paper, the chances of Boetsch pulling off an upset don’t appear good. Yes, he’s a strong middleweight and has shown stopping power before, but very few fans will be placing large bets on Boetsch to win. For all of the negatives on Boetsch that we can point to, the one thing he has going for him is history.

He’ll be an underdog against Jacare.

Boetsch seems to flourish in the underdog role, a position he’ll find himself in yet again at UFC 208. With nothing to lose and everything to gain, Boetsch will leave it all in the Octagon.

A fight against a fighter with no pressure and nothing to lose is a dangerous place to be for a top guy like Souza. He’s certainly talented enough to handle someone of Boetsch’s caliber, but what if the unthinkable happens? What is Boetsch lands a lucky shot and drops the Brazilian to the UFC canvas? It’ll completely unravel the last five years of work Jacare has put in to cement his place as one of the best 185-pound fighters. It’ll be tough for not only fans to accept Souza in another top fight, but for the UFC to market the Brazilian as a legit contender if he loses to a middle-of-the-pack fighter like Boetsch.

It’s not as if Jacare has a lot to gain in this fight either. A win over Boetsch isn’t going to allow Souza to leapfrog Romero as the next title contender. Souza will still have to compete against another top fighter after UFC 208. Perhaps the only way Souza can get some momentum after a win at UFC 208 would be if he came out and finished Boetsch with his striking. That’s the avenue that presents Boetsch with the best chance of victory, so we’ll likely see Souza take the fight to the ground early and often.

The fight against Boetsch is clearly an attempt by Jacare to collect a paycheck while waiting for another big fight. A decision or submission victory for Souza would do little for his chances at a title shot, no matter how warranted his claims are. However, in such a dangerous predicament where he’s facing a fighter who has everything to gain by beating him, perhaps it’s best if we see Souza do what he does best.