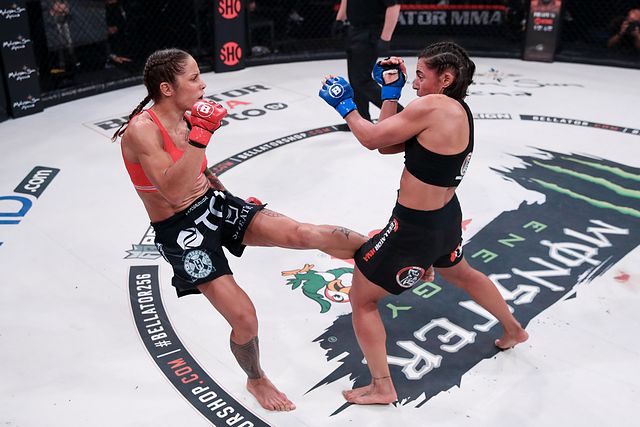 Bellator looks to take center stage in the MMA world with two events in two days. Both events take place in Honolulu, Hawaii. Not only does Hawaii have some of the best fighters of all time, but also unbelievably passionate fans. The first event is Bellator 278 on Friday, Apr. 22.

Due to several fight cancellations, Bellator 278 currently features eight matchups. In the main event, the women’s flyweight championship is up for grabs, with Liz Carmouche trying to take the title from Juliana Velasquez. Carmouche has been dominating since joining Bellator, but Velasquez’s shiny undefeated record looks phenomenal on a champion.

Bellator 278 also starts the Bellator bantamweight grand prix, with only two of the four fighters able to advance. Jornel Lugo and Danny Sabatello go toe-to-toe in a matchup to determine the best upcoming contender. The other bantamweight grand prix matchup is Enrique Barzola vs. Nikita Mikhailov. Both fighters have the potential to go far in the tournament, but only one can advance at Bellator 278. Another fight to keep an eye on is Christian Edwards vs. Grant Neal. They both lost their last fight and need a win to get back on track.

The preliminary card airs live on YouTube starting at 9 p.m. ET, with the main card following at 10 p.m. ET on Showtime. Check out the full Bellator 278 preview and predictions below.

Juliana Velazquez looks to defend her flyweight title for the second time as she takes on Liz Carmouche; does the champion retain against the former UFC bantamweight and flyweight title challenger?

After defending her title successfully against Denise Kielholtz, Valesquez comes into her second title defense ready to impress. Her second title challenger is not only a good challenger, but also one of the pioneers of women’s MMA.

If Carmouche retired today, she would be one of the best women to ever fight. Holding a record of 16-7, “Girl-Rilla” has combination of aggressive striking that has matched well with her fight IQ gained from experience. After leaving the UFC in 2019, Carmouche signed with Bellator, where she is 3-0.

The biggest difference-maker in this fight is Carmouche’s ability to expose her opponent’s weaknesses. Carmouche should be able to use the clinch and forward pressure to wear down Velasquez before finishing her in the championship rounds.

There are two qualifier bouts for the bantamweight grand prix on the main card; which fighters get the job done and earn a spot in the tournament?

The first matchup between Sabatello and Lugo is a classic striker vs. grappler matchup. Sabatello is an NCAA Division I wrestler training out of American Top Team, and Lugo is training out of Combat Club. Both fighters have established themselves as top Bellator prospects but need a defining moment to take the next step towards a title shot.

Until someone in Bellator can knock out Sabatello, it’s hard to pick against him. The former wrestler threw Brett Johns around in his last fight and continues to improve. Meanwhile, Lugo is talented and has a bright future, but showed weaknesses against Brian Moore that should be exploited. Sabatello should be able to pound Lugo out or choke him inside the distance.

Barzola vs. Mikhailov is a matchup that shows the depth in the bantamweight grand prix. At 23 years old, Mikhailov is 2-0 in Bellator and represents a dark horse in the tournament. On the contrary, Barzola trains out of the American Kickboxing Academy with plenty of UFC experience before joining Bellator in his last fight.

It is hard to pick against a Russian that tends to grapple, but Barzola has the tools to get the win. Barzola is well-rounded and adapts well to wherever the fight goes. He should be able to counter-wrestle to take away Mikhailov’s strengths and then beat him up on the feet for a convincing decision win.

Light heavyweights Christian Edwards and Grant Neal each sport one-loss records heading into their matchup; how does this fight play out?

Last time out, Edwards and Neal had their undefeated records tarnished with a loss. Edwards was stunned by a first-round upset loss, and Neal was devastated after losing a close split decision. Regardless of how they lost, both fighters need to get back on track with a win.

The main difference will be Neal’s experience and ability to keep his opponent’s on the ground. Neal has fought better talent thus far, while Edwards shows massive potential without any tough opponents outside of Simon Biyong.

Neal most likely learned a lot from the split-decision loss and improved drastically since the last fight. Edwards is well-rounded, but Neal should be able to take him down and keep him there.

The sleeper match-up at Bellator 278 is Makoa Cooper and Blake Perry. Makoa is the younger brother to PFL superstar Ray Cooper III. At 21 years old, Cooper made his pro-MMA debut last month and scored a highlight-reel knockout in nine seconds.

On the other side of the cage, Perry is making his pro MMA debut at Bellator 278 and looks to start by upsetting Cooper in his hometown. Perry was 5-3 as an amateur and won his last four bouts, all by finish, before turning pro.

Cooper vs. Perry displays two fighters willing to do whatever it takes to win. Cooper will be in front of his fans and ready to capitalize on the momentum from his pro debut. Meanwhile, the difference between starting 0-1 and 1-0 is insane, putting extra pressure on Perry to perform. Expect a slugfest before one of them gets knocked out.