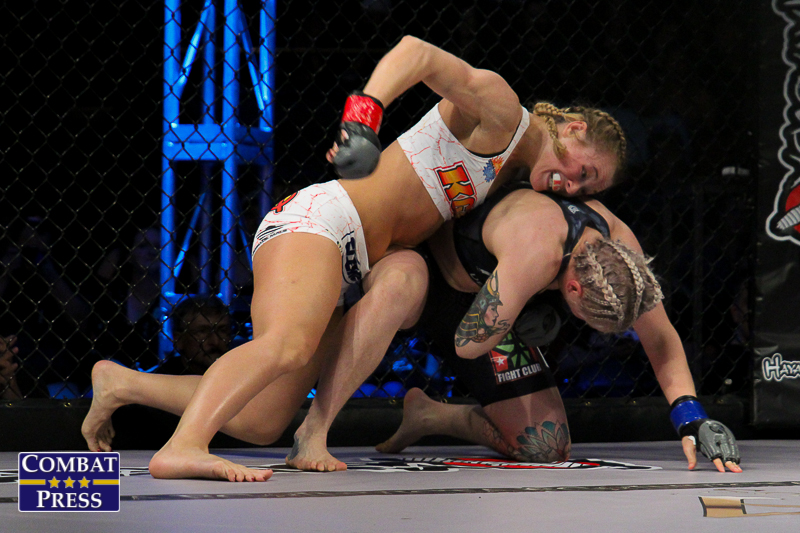 This week, we take a look at the women from the UFC 262 card.

As is always the case, I will skip Katlyn Chookagian’s bout with Viviane Araujo. Katlyn is a training partner of mine, and it would be unfair and biased of me to preview her fight.

This leaves us with two interesting bouts. In one, Andrea Lee faces Antonina Shevchenko. In the other affair, it’s Gina Mazany against Priscila Cachoeira.

This is a very exciting fight. We really have the potential for a three-round Muay Thai classic, even though it might be in Lee’s best interest to do otherwise.

Lee comes in at 11-5 on the heels of a three-fight skid. However, those losses were all decisions, including two split verdicts, and they came to three great opponents in Joanne Calderwood, Lauren Murphy and Roxanne Modafferi. Shevchenko enters at 9-2 after a November finish of Ariane Lipski. Her two losses are also not shameful ones, as they came to the aforementioned Chookagian and Modafferi.

While Lee is a great striker, her biggest advantage in this fight is on the ground. However, if you’ve seen Lee fight, then you know she loves a good stand-up battle. Regardless of where her edge might be, Lee is probably salivating at the idea of throwing hands with Shevchenko.

Lee throws a great lead low kick. I am not normally a fan of naked kicks, but she throws that kick often by itself and lands it hard. She won’t be at any risk of being taken down here, so she’ll go to that kick over and over, both for offensive purposes and to put Shevchenko on her heels. That second part is important, because Lee is at her best when she is the one coming forward and stalking her opponent.

Another big weapon for Lee could be the jab. She will enjoy an inch and a half reach advantage, so using that jab and landing first could also accomplish the goal of backing up Shevchenko and keeping her at a range where Lee wants her.

While Lee is good in the clinch, Shevchenko is the last person you want to battle in the clinch. Shevchenko can get the Thai clinch and really do a number on anyone. So, Lee will want to keep it at a range where she can stay out of that clinch.

If the clinch does in fact happen, Lee wants to push it to the cage quickly and get on the outside. When Lee is in that position, she is good at getting her underhooks, which will allow her to avoid the Thai clinch and also will leave Shevchenko’s body open for knees.

We might see Lee score late takedowns to try to solidify or steal rounds. Shevchenko can be taken down, and she isn’t exactly in her element on the mat. Lee can get those late takedowns and do some damage or even sneak in a submission.

Shevchenko will employ a similar game plan with some minor adjustments. The easiest place to hit Lee is right down the middle. She has her guard up, always protecting the power punches. This at times does leave an opening for jabs. So, first and foremost, I want to see a heavy dose of jabs from Shevchenko. If she can throw and land a couple, then it will also possibly allow her to move forward into the clinch.

Another key for Shevchenko is to try to avoid moving backwards too much. Lee will be very happy if Shevchenko is taking steps back. As I always say, if something makes your opponent happy, then it’s something you shouldn’t be doing. If, on the other hand, Shevchenko can manage to get Lee to back up, then it works great for her. Shevchenko is as good as anyone at cutting off the cage. If she can start with the jabs, get Lee moving back and then cut off the cage, Shevchenko will be two steps into the three-step process to get the Thai clinch and dominate the fight.

Step three is then simply to push Lee to the cage and wrap those hands around the head. Does Shevchenko need it to be against the cage? Absolutely not. She can be violent with it right in the middle of the cage. However, it’s just going to be harder for her to actually get it in the center.

Defensively, Shevchenko has to make some effort to check kicks. She can’t let Lee get off to a good start with those low kicks. So, check them. She can’t take a lot of leg damage, and she should have counters ready for when Lee does throw those kicks. Finally, late in rounds, Shevchenko has to expect Lee to shoot in, so she should be ready to sprawl and not let Lee steal rounds.

This one is very interesting. We will see a unique case of the American fighter looking to take it to the ground, while the Brazilian tries to stand and bang.

Mazany sits at 7-4 after a third-round stoppage of Rachael Ostovich in November. Meanwhile, Cachoeira sports a 9-3 mark. The Brazilian’s last fight was all the way back in February 2020. She won that fight in just 40 seconds, and her previous bout was June 2019. So, Cachoeira has had just 40 seconds of cage time in almost two years.

When I previewed Mazany’s fight with Ostovich, I predicted that Mazany would go for and get takedowns. This was met with a lot of skepticism. How could she take down a wrestler like Ostovich? Well, the reason I was so confident that she could — and I was proven correct when she did so many times — is because Mazany has some very good takedowns. That will be important once again here.

First, let’s talk about how she can get it there. Mazany’s best strike is her straight right hand. In Cachoeira, she is fighting someone who will throw wide, hard power punches that are never going to land because she is just too far away when she throws them. Mazany should really work that straight left, but do so in order to get Cachoeira closer.

Cachoeira loves a good brawl. However, Mazany doesn’t want to slug it out with her. Mazany is not poorly equipped on the feet, but she’s not likely to win a three-round striking battle. She just needs the Brazilian in close so that she can convert the takedown.

Mazany’s takedowns will come from the clinch. She is great at forcing the clinch, and she has great takedowns from there. She’ll use that straight left when she gets Cachoeira in range and then follow up into the clinch. Once in the clinch, she can get the takedown. Then, she is in business.

Cachoeira will probably be more resistant on the ground than Ostovich. Her defense on the ground and even her ability to create offense is better. Mazany will need to call upon her creativeness and trickiness to counter this.

Mazany can be really creative with her passes, advances and submission attempts. She also is aggressive with them. Yet, I hope to see her a little more reserved in this fight. She has to think a step or two ahead and then make her move. She can’t rush for submissions, because she can’t make a mistake and give up the position. She may even look to just get into half guard or side control and land some ground-and-pound. This will be a little less risky and allow her a better chance of just keeping it on the canvas.

Cachoeira’s lack of recent cage time could be cause for concern. That much inactivity could cause the old ring rust — it does exist, Dominick Cruz — to be a problem.

Cachoeira will want to keep this fight on the feet. She is very very capable of handling herself on the ground, but her advantage really lies in the stand-up. She will need to find a happy medium between those far-away, wild punches and getting in super close to where Mazany can get clinches. This will be an especially hard task since she gives up three and a half inches in reach to Mazany.

There are two keys in this bout for Cachoeira. When she is in her southpaw stance, the Brazilian throws a beautiful and hard straight right hand. If we are talking about simple damage, that punch is going to be the one to cause it. In addition, Mazany will leave her body open when standing. This is going to be a nice target for Cachoeira.

If Cachoeira works the body, then, in addition to obviously hurting her opponent, she will also slow Mazany down from moving away from the punching exchanges. Even if Mazany does move away, Cachoeira is really good at stalking her opponent and cutting them off. She can then get in close, too, although she will still want to avoid getting within Mazany’s clinching range and play it safe instead.

In Mazany’s fight with Ostovich, we saw Ostovich almost panic at times while looking to get Mazany off of her. Cachoeira isn’t likely to do that. The Brazilian won’t be defenseless If she gets taken down. She can even be offensive off her back. She shouldn’t rest or let Mazany dictate what’s happening. Cachoeira must be offensive, even if being offensive just means lots of movements to make Mazany slow down. Also, she must prevent Mazany from getting wrist control. Mazany has great wrist control and can really use that to create openings.