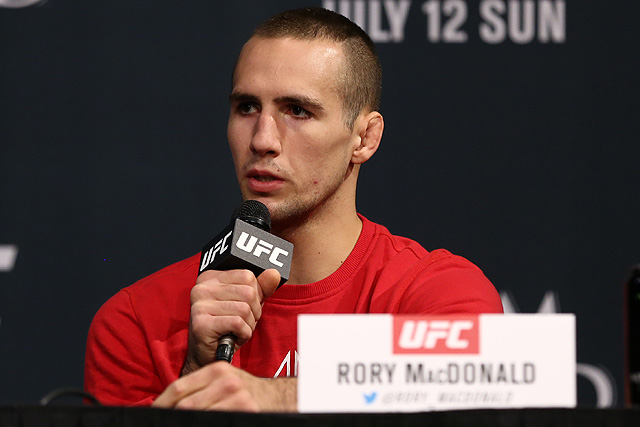 Rory MacDonald ended his current UFC contract on a sour note, but that figures to change when the voicemails from other promotions begin to flood in.

MacDonald, competing in the last fight of his contract, lost to Stephen “Wonderboy” Thompson last weekend. It was a big gamble for the Canadian. The loss to Thompson gives MacDonald back-to-back losses. He’s been effectively removed from the foreseeable future of the UFC welterweight title picture. The UFC is likely to make a strong push to re-sign MacDonald, who is only 26 years old and remains a top-ranked fighter, but MacDonald has already indicated he’ll test the market to see what his worth is across the board.

“I want to make the most money I can. I want to get paid for what I bring to the table,” MacDonald previously said on The MMA Hour. “I’ve sacrificed a lot to get to the top, to the world title. I really sacrificed, and I took a lot of chances. I did a lot of favors, I felt like, for the UFC and I don’t think it got returned. So now it’s all about making money, and whoever wants to pay me the most is where I’ll go.”

There certainly will be plenty of suitors lining up. Bellator CEO Scott Coker has already expressed interest in signing MacDonald, and there are also other options such as ONE Championship and the World Series of Fighting. All three companies could use the infusion of talent and name value MacDonald would bring to their promotions.

Bellator has had no qualms about signing fighters to lucrative contracts even after losses. MacDonald would certainly be immediately placed in the title picture in Bellator, too, which is a position it will take some considerable time for him to reach again in the UFC. An Andrey Koreshkov vs. MacDonald fight would be another star-studded main event, something Bellator has struggled to put together in the welterweight division.

However, there are some inherent risks in signing MacDonald.

While he’s only 26, he’s been competing professionally in MMA for over 10 years and has taken some grueling punishment in his fights. That’s not even considering the damage accrued on a daily basis from training in a gym full of top-level talent.

Then there’s the second fight with Robbie Lawler. The amount of damage MacDonald took in that fight alone was probably on par with the cumulative punishment he’s received throughout his entire career. It’s a fight that you simply cannot come all the way back from. The fight was one of the best title fights of all time and created some amazing memories for MMA fans. Yet, that came at the expense of countless trauma to the head and body of MacDonald and Lawler.

Pundits have already begun discussing if MacDonald’s best days are behind him. It’s certainly a fair discussion. However, MacDonald has only lost to the elite of the division and was even up on the scorecards in the second fight with Lawler. It’s not as if MacDonald is facing scrubs on local cards and getting face-planted onto the canvas.

When facing elite talent, the margin of error is miniscule. Guys at MacDonald’s level have to fight perfectly to just scrape out wins. In MacDonald’s case, he hasn’t been able to find victory in his past two outings. He still trains with some of the best fighters in the game and has one of the best coaches standing behind him, though. If there’s anyone who can bring about the resurgence of MacDonald, it’s the mastermind Firas Zahabi.

The Canadian is likely to cash in big despite the recent losses. This is definitely well deserved considering the battles MacDonald has been in. The only question is, who will be signing his checks?