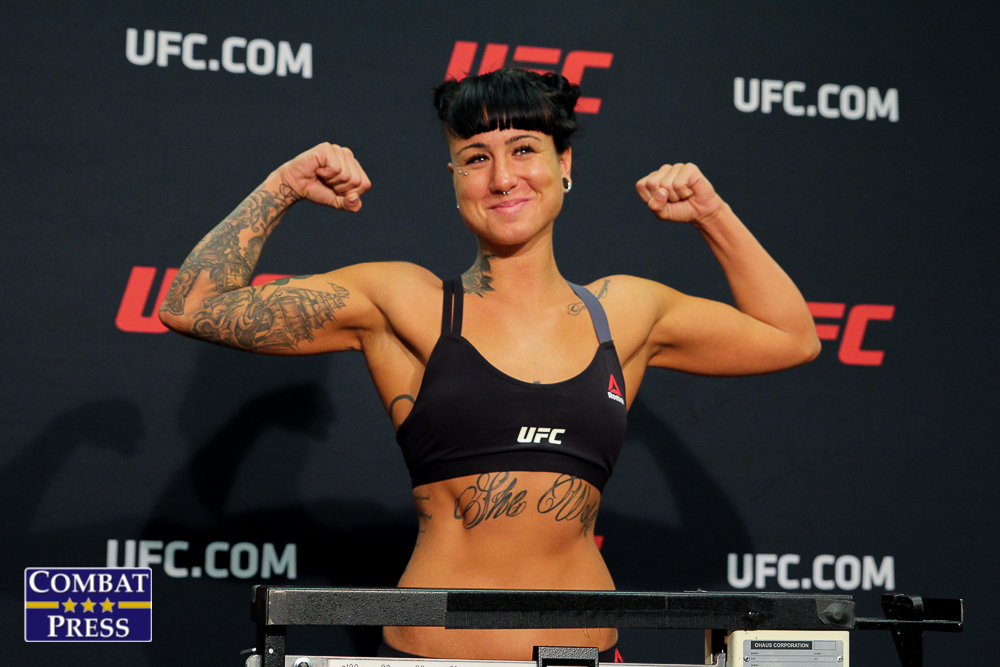 This weekend’s UFC on Fox 18 card brings us a pair of female fights. While not part of the main card, both contests hold intrigue, because we might be looking at some fighters with their backs against the wall. All four of these ladies are really in need of a win.

We have Ashlee Evans-Smith against Norma Dumont in the bantamweight division, as well as a flyweight bout between Rachael Ostovich and Gina Mazany. The breakdown of these two fights is really quite simple, as I feel each has a specific route that best offers them a chance at a win. So, let’s take a look.

Evans-Smith has some good wins on her resume, most notably one over Marion Reneau. However, that victory came in 2016, and this will be her first time in the cage since February 2019. Evans-Smith has dropped three of her last four outings, but those losses include Andrea Lee and Ketlen Vieira in bouts that went the distance. There is no shame in that. Evans-Smith has said she is anxious to show her improvements, and all that time away does leave a lot of time for improvements.

Evans-Smith is capable of winning a fight on the feet, but the ground is her biggest asset in facing Dumont. Dumont does have two submission wins, but those opponents were a combined 0-2. Dumont also lost her last fight by submission to Megan Anderson, someone not known for her grappling. In that fight, Dumont honestly looked lost on the ground. Evans-Smith does have a couple submission losses herself, but she will have the edge on the canvas. I don’t see Evans-Smith rushing to get it there, though. She will likely test the waters on the feet and see how that is going. If she’s doing well, then she can stay there. If not, then she can take it down.

I am going to take a look at this from the perspective of the stand-up not going well and Evans-Smith taking it down. That’s not to say it will happen, but I do like to look at it from a fighter’s best route to victory.

As I said, I don’t see Evans-Smith rushing to the takedown, nor should she. She can keep it on the feet for a bit, whether that means standing in the middle and throwing or working a clinch game. She can get Dumont comfortable with the thought that she wants to stand. Don’t let her know she needs to have that sprawl ready right away. I don’t see Dumont looking for any takedowns, so Evans-Smith can throw kicks without worry. She can maybe spend the first round on the feet and then get the takedown. Evans-Smith can probably get it either with a shot or from the clinch. When she does, sure, try to be on top, but if she doesn’t land there, she should get guard right away. This is not so much for protection, but to keep Dumont there, because Evans-Smith can win this off her back. Whether on top or bottom, Dumont’s main focus is probably going to be getting up. Evans-Smith needs to be patient, don’t rush into anything, and wait for the opening — the submission will be there.

Dumont brings a 4-1 record to the cage. She’s coming off the aforementioned loss in her UFC debut to Anderson. Before the UFC, outside of a win over Mariana Morais, her opponents have been… well, not exactly top tier.

Dumont needs to get confident right away in this fight. It is 100 percent natural for her to have some self doubt after being beaten so easily in her UFC debut. So, establishing confidence early could be key here. She needs to be cautiously aggressive — come forward, throw strikes, and mix them up, but beware of the fact that Evans-Smith might drop down and take her down if she’s doing well on the feet. Dumont doesn’t want to be predictable. She can’t let Evans-Smith get her timing and be aware of what is coming next. In simpler words, Dumont has to make it ugly so that Evans-Smith can’t get a rhythm going.

If the fight hits the ground, Dumont can’t get anxious, whether on bottom trying to stand or on top trying to land ground-and-pound. If Dumont is on the bottom, then she should pull Evans-Smith in close, control her posture, and hope to get stood up. If she’s on top, then she shouldn’t be reckless with her offense and has to avoid leaving her arms available. She has to see if a pass is there. Don’t stay in the guard. Dumont will need to be aggressive, but also cautious.

This fight could be the equivalent of an old pro wrestling loser-leaves-town match, except we won’t see the loser come back wearing a mask to hide her identity.

Ostovich has hinted at as much by saying a loss could be her last UFC fight. She brings what we call an upside-down record, with more losses than wins, at 4-5. She is 1-2 in the UFC after winning her fight at The Ultimate Fighter 26 Finale and suffering submission losses in her following two fights against Montana De La Rosa and Paige VanZant.

In Mazany, Ostovich is fighting someone who has a pretty good ground game. This, combined with Ostovich’s previous submission defeats, means we can expect Ostovich to want to avoid going to the mat.

Output will be key for Ostovich. She needs to throw and throw often. She can be hit and isn’t necessarily known for her defense, but she can be accurate and effective when throwing. I want to see her avoid moving backwards. She should use footwork and head movement, and even circling from the outside is fine. Just don’t move backwards. At times, she can come forward, land combos, circle off, reset, and do it again. She would be well to avoid clinch situations, too. Anything that can lead to a takedown is bad.

Ostovich has a strong lower half, which might make Mazany prefer shots in as opposed to clinches. If we see a clinch, Ostovich needs to put Mazany against the cage. She can even have some success there. She just doesn’t want her back on the cage at all.

Finally, Ostovich should work the body. We just saw Mazany dropped for a loss due to a knee to the body, so we know she can be hurt there (well, I guess we all can, right?), but more importantly, that can really help slow down Mazany and sap her of her energy. This can in turn lead to her resigning herself to a sluggish stand-up battle.

Mazany went 1-3 in her first UFC stint before she was cut by the organization. She picked up a King of the Cage win and was brought back, only to lose in 22 seconds to Julia Avila. Mazany has to be feeling a lot of the same pressure that Ostovich is feeling.

If I am Mazany, I am putting Ostovich on her back the first chance I get. If Mazany can put Ostovich down right away and not let her get any confidence going — make her frustrated, too — then even if she doesn’t get the finish, everything following will be easier for her. It can put Ostovich on the defensive, which will make her start moving backwards and become hesitant to throw.

I personally feel like shooting in is more appealing here for Mazany than maybe working for takedowns off the clinch. This is for a variety of reasons, the biggest being that getting it in the middle of the cage means taking the cage away from Ostovich as an escape route or defense. Not to downplay Mazany and her striking, because it is fine, but that is where Ostovich has a chance. Why would Mazany let Ostovich fight in an area that is better for her when she can instead dictate everything from the ground? If the finish isn’t there, then Mazany can still be active, which will lead to added frustration on Ostovich’s part. As the fight wears on, this frustration could lead to an inactive Ostovich. Then, if Mazany wants, perhaps she can be more open to standing.