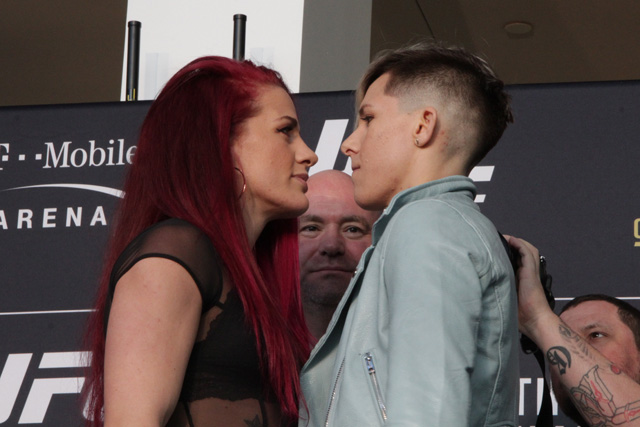 This past weekend, we had two female bouts on the UFC on ESPN 18 card. Both were intriguing for different reasons. Gina Mazany defeated Rachael Ostovich with a very late finish and then Norma Dumont took a decision from Ashlee Evans-Smith. So, without further ado, let’s get started.

Mazany got that late finish over Ostovich via TKO in the third round.

I had said that I felt Mazany would want and be able to get the takedowns and could then control the ground action. I was met with some criticism on that prediction due to Ostovich’s wrestling. However, Ostovich had previously been submitted twice in a row, and Mazany has good submissions. Well, this is one where I get to say I was right. Mazany was able to get the takedowns almost immediately, eventually garnering a total of seven. She punched her way into clinches and got the fight to the ground almost at will.

Before we delve too far into the ground battles, let’s talk about the action on the feet. Ostovich actually did fairly well in this area, landing some good, hard shots during exchanges. Where she went wrong is in how she often allowed herself to be backed into the cage during those exchanges. This meant that if Mazany did get hurt at any time, then the clinch was right there for her. I would have liked to have seen more side-to-side movement from Ostovich, or maybe she could have even tried to back Mazany to the cage. Ostovich could have done well herself on top if she forced a clinch and took it down. But mostly, she just needed to avoid having her back against the cage. The best chance for Ostovich would have been to keep it on the feet, fight at a good distance, and try to land her power shots. Moving back to the cage erased all possibility of this.

Again, though, Mazany got takedowns at will and did some damage with them. One thing she might have done better is to be a little more patient and set up position before looking for submissions or ground-and-pound. She rushed a bit, which allowed Ostovich to scramble and/or stand. Yet, in reality, we all do that sometimes during a fight. I’m being overly picky in mentioning it. To the credit of Ostovich, she was doing really well at scrambling and getting up, including one of the best escapes you’ll ever see from a north-south choke attempt that I couldn’t do justice in even trying to explain.

As the third round wore on, Ostovich showed heart. She didn’t give up and kept trying to land something. She was tired, though. Getting up that many times takes a lot of energy. Mazany was able to land some nice kicks to the body, and Ostovich went down and had nothing left.

Ostovich has the talent to compete at a high level. I would like to see her go back to Invicta or a similar promotion, where she can work on some things and perhaps build her record up before she’s given another shot. The talent is there, but she needs to put everything together.

What’s next for Mazany? Maybe someone like Shana Dobson. They are at about the same place in the standings in the division, so a fight between these two ladies would make sense.

There really isn’t much “in-depth” reviewing to be done in Dumont’s decision victory over Evans-Smith. This was three similar rounds in which Dumont far exceeded any expectations I had for her in this fight and just looked outstanding in beating Evans-Smith.

There was some talk, from myself included, on how Evans-Smith almost looked like she didn’t want to be there. She looked confused, like something was maybe wrong with her. However, this doesn’t take away from the performance of Dumont. Who’s to say that Dumont isn’t the reason Evans-Smith looked that way?

In the first round, Dumont showed a willingness to engage in a fire fight. She was landing more often, landing the harder shots, and didn’t seem fazed by anything Evans-Smith did land. Evans-Smith was in survival mode by the time the first round ended.

To start round two, it seemed Evans-Smith had some renewed energy. She came out looking aggressive and landed a couple shots, but Dumont also upped her tempo and went right back to it again. Dumont was just outlanding, out-powering and out-techniquing Evans-Smith, so much so that I scored the round a 10-8.

I absolutely loved the third round of this fight.

First, because Evans-Smith had been beaten up and dominated for two rounds and yet she didn’t fold. She wasn’t getting much done, but she showed heart and kept fighting, kept trying, and kept looking to make something happen. That is so much harder than one might think. When a fighter has been dominated for two rounds, often they will resort to trying to survive and looking for the moral victory of saying they went the distance while just trying to avoid damage. Evans-Smith didn’t just try to survive. She kept engaging, knowing she was going to take more damage in return.

The other reason I loved the round was because Dumont kept the pressure on. Clearly up two rounds, she knew that she could have been safe, not take any risks, and just get the decision. Dumont didn’t do that, though. She kept the proverbial foot on the gas while looking for a finish. She kept coming forward and kept being exciting. Again, that is not something that is as easy as it may look. She’s dominating, so why wouldn’t she just keep doing what she was doing? At that point, she was tired, and winning is the most important thing, so it’s not uncommon to think about just keeping it safe and not taking any risks en route to the decision. Sometimes it can take a lot to keep that thought process away and keep pushing. Dumont did just that. She kept pushing and looking to get a finish rather than just walking away with a decision.

So, I give props to both fighters for that third round.

What’s next for Dumont?If she’s going to fight at bantamweight, then she needs to make sure she can make the weight. I am not a fan of fighters missing weight for any reason. Assuming she can get that fixed and continue at bantamweight, perhaps Stephanie Egger would be a logical next opponent. Egger is great on the ground, and Dumont showed she can be great on her feet. Now, let’s see what Dumont can do as far as trying to avoid the takedowns of a great grappler and how she can handle herself on the ground if it goes there.