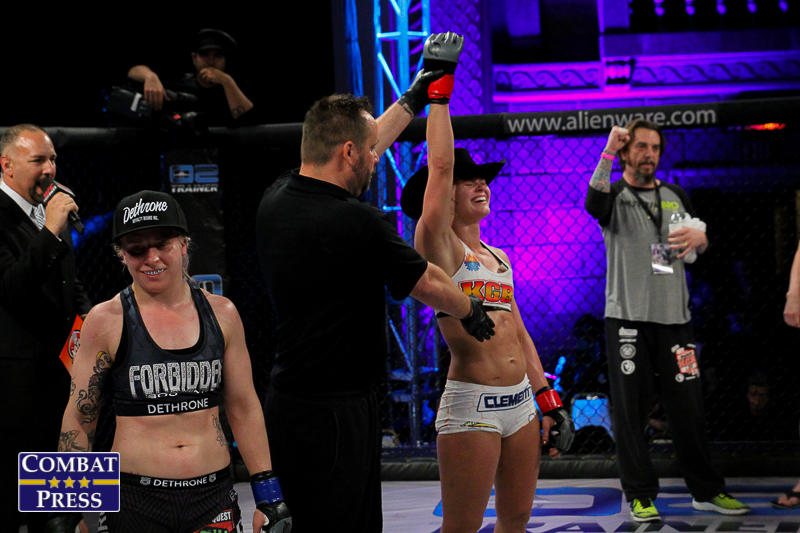 UFC 262 was a night with some great fights and really exciting finishes.

As you surely know by now, I am going to go over the female bouts on the card.

I will skip Katlyn Chookagian’s unanimous nod over Viviane Araujo due to my obvious personal bias towards Katlyn. This still leaves us with two fights to discuss, so let’s get into it.

In round one, Mazany did exactly what everyone expected. She didn’t have much interest in standing with Cachoeira, nor should she have. She knew where her advantage lied and was immediately looking for the takedowns. It was surprising, though, how easily she got them. Mazany has really good takedowns and could get them in a variety of ways, but she didn’t even need to get overly technical here. She was using simple, basic shots, and she was finishing them.

Cachoeira was not helping herself. She needed to find a happy medium between throwing her wide punches from really far out and getting in too close. She didn’t find that happy medium. Instead, she was allowing herself to get close, which made those takedowns so easy for Mazany. Against most opponents, this approach would work out great for Cachoeira, as she has power and can hurt anyone, but it wasn’t the best of ideas against Mazany.

Cachoeira’s ability to get up was impressive, though. I wasn’t totally expecting it. Yet, when she got up, she didn’t separate. She almost came right into the clinch with Mazany. Pedro Cerrano from Major League could hit a fastball really far away, but he couldn’t hit a curveball. So, the pitcher would never throw him a fastball, right? Well, Cachoeira was throwing Mazany fastballs.

In the second frame, Mazany again got it to the ground. However, it got stood up. Once they stood, Mazany seemed to be totally gassed. Cachoeira was able to pick her apart and get the TKO.

So, let’s talk about that stand-up, shall we? Understand, I come from the grappling side. I was doing Brazilian Jiu-Jitsu long before MMA. Unless it is very obviously needed, I am not a fan of standing the fighters back up. Mazany was not exactly being super active, that is true. However, sometimes what appears to be inactivity is instead something else, such as baiting your opponent into a mistake, waiting for an opening, or trying to wear them down. It was clear where Mazany wanted to be. She’d worked hard to get there and had it taken away too quickly.

When someone is perceived to be stalling on the ground, they are punished by being forced to stand up. Why doesn’t that work in reverse? Let’s use this fight as an example. If Mazany was trying to come forward, trying to chase, trying to get close so that she could get the takedown and Cachoeira was staying away, staying on the outside, and not engaging much — in effect, stalling — would she be punished? Why in a case like that is the fighter not forced to go down to the ground? Why does a fighter on top on the ground have to have a certain activity level or risk being punished when there is no equal punishment for someone who is doing the same thing on the feet?

What’s next for Cachoeira? She asked for Montana De La Rosa. It’s surprising she wanted someone else who likes to be on the ground, but I’d sign up to watch it.

Lee caught Shevchenko with a triangle armbar in the second round. I expected some great action on the feet, and I hoped Lee would eventually take it to the ground, where she had a huge edge. Well, it played out just like that.

In the first round, both ladies landed some very good shots. Lee needed to prevent Shevchenko from getting the Thai clinch, so Lee’s arm placement was going to be crucial. While there was one instance where Shevchenko sort of got it, Lee was mostly able to avoid it.

As the round wore on, Lee really started to take the lead in the striking realm. In a sense, this is surprising, because Shevchenko is such a good striker with a lot of accomplishments. However, Lee is really quite good in that area, too.

I don’t know if Lee’s plan was to take it down, but her success on the feet in the first frame made it so much easier to get it to the ground in the second. She put it in Shevchenko’s head that she could stand with the Muay Thai fighter. It also gave Shevchenko the impression that Lee wanted to be there. Furthermore, Lee’s success there naturally caused Shevchenko and her corner to focus on preventing it from happening again. With Shevchenko focused on the striking, Lee was able to shift gears and take her down.

Once it went to the ground, it was just a case of two different calibers of fighters. Lee, despite her fights not seeming to go there very often, is really good on the mat. Shevchenko just isn’t at that same level. Shevchenko tried to hang on and escape. To her credit, she did hang in there and show heart, but, whatever Shevchenko did, Lee had something else waiting for her. With seconds left in the round, Lee got the tap.

What could Shevchenko have done differently? It’s hard to say, because it’s hard to get a gauge on what she does know on the ground. She panicked. She clearly didn’t want to be there and immediately went into “holy crap” mode. Trust me when I say that, as a grappler, we love that. You’re not focused on defending. You’re not really aware of what we’re doing to improve or transition. You are just concentrating on how you can get out of that spot. Shevchenko needed to be a little more calm and accept that she was in a bad position. Then, she could look for ways to properly defend and escape. Instead, she allowed Lee to adjust, switch, and do whatever she wanted.

You have no clue how exhausting it is to hold something like a triangle choke for as long as Lee did. However, she was able to have her legs in a place where she could slightly take some of the pressure off of them while they were propped on Shevchenko’s shoulders. It’s still exhausting, though. I promise you, she laid down in bed last night and had no energy to get up for anything.

What’s next for Lee? How about the winner of the upcoming fight between Lara Procópio and Casey O’Neill?