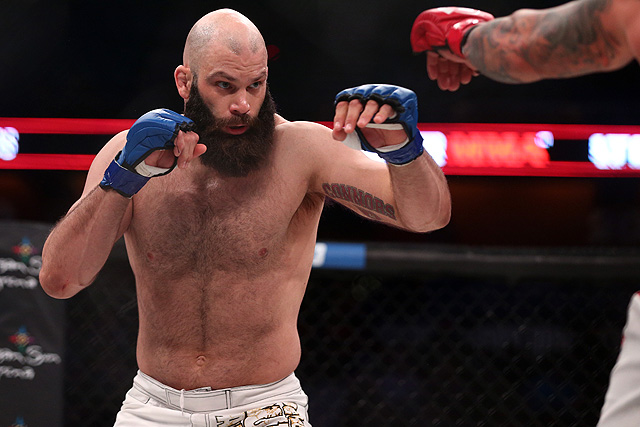 The Rizin Fighting Federation has largely helped fill the void left by Japan’s legendary Pride FC organization in terms of holding grand events and sprinkling in some match-ups between heavyweight and open weight competitors.

The inaugural Rizin event in December 2015 fulfilled these requirements. The event featured a heavyweight grand prix which was eventually won by Muhammed “King Mo” Lawal. The show also featured Fedor Emelianenko’s return and some nostalgia, with Bob Sapp fighting Akebono under shoot-boxing rules.

Fast-forward a few events and those heavyweight match-ups continue. Unfortunately, no Sapp this time, but the trend of heavyweights fighting in the Saitama Super Arena goes on. Rizin’s latest card, which marks the first round of the World Grand Prix 2017, shouldn’t disappoint.

“Fighting in Japan under these circumstances is something I’ve had on my bucket list since I’ve been interested in mixed martial arts. This is something I’ve wanted for a long time,” Tyler King, who holds a 12-5 record and competes at the upcoming event, told Combat Press. “The fact that I’m going to get paid handsomely and be able to shut up another fraud is something I’m so excited for.”

The aforementioned “fraud” King is referring to is the 6-1 Amir Aliakbari, his opponent on Sunday’s Rizin card. Aliakbari has already made his presence known among the fans of Rizin, where he made it all the way to the Openweight Grand Prix Finals, only to lose to Mirko “Cro Cop” Filipovic. He bounced back with a victory over Gerômino dos Santos in April at Rizin’s last show. Aliakbari has made a successful transition to MMA after an illustrious and controversial wrestling career, one in which he was banned from international competition for failing multiple drug tests.

“I’ve seen Amir since he fought for Full Metal Dojo, and he’s a big, tough guy, but his skill set does not match up with my skill set,” said King. “He is an amazing wrestler. Other than that, I’m better everywhere.

“To be perfectly fucking honest, I’m doing Rizin a favor. Rizin doesn’t want him. He’s not exciting. He does the same thing every fight. He’s never fought anyone like me before. He’s never fought anyone with a ground game like I have before. I give him respect because he got in there with Mirko Cro Cop, a legend who was definitely rejuvenated for whatever reason, but he was exposed, and I will expose him further. He’s talking like he’s gonna stand up, but when he stands up and gets touched he goes right to that wrestling.”

King is looking to get himself back in the win column. In January, he suffered a knockout at the hands of Keith Bell at CES MMA 41.

“Anyone who fucking says that [getting over a KO loss] is easy is either stupid or a liar,” King said. “When something like that goes down, with the experience I have, in football and with MMA, you have to look at the entire picture — What direction are you going in? What’s going on? Figure out what went wrong. Do you still want to do this? Are you going to be OK? — you have to take real stock of what’s happening and that’s what I did. I looked at what’s happening with my training. I sat there and examined every coach, the circumstances leading up, what was going on with me mentally. But, you know, I learned from it and I’m fucking ready to push on. I took stock of everything and I made the necessary adjustments.”

King’s not going to change his outgoing personality and willingness to trade barbs with his opponent before a fight. It’s been a staple of his career. It’s this charisma he touts for getting people to tune in and watch, win or lose.

“My last fight with CES, I’m not happy with the performance,” admitted King. “I’d love to run it back, but I moved the fucking needle with that fight. That fight went from no one gave a shit, to being one of the must-see fights on that card. Any time, any promoter. I don’t care if it’s Rizin, Bellator, UFC, Dana White’s Tuesday Night Fights. I don’t care if it’s CES, in a VFW basement, I don’t care. I will get eyeballs on that fight. I have the blueprint. I’ve learned from some of the best — studying guys like Chael Sonnen, Conor McGregor, Josh Koscheck.

King will have the opportunity to prove he moves the needle soon. He already has stated that he will put Aliakbari out cold, be it by knockout or submission. King plans on making sure he leaves an enduring impression inside the Saitama Super Arena in Tokyo.

“I have the stature [and] the charisma. I got the mouth,” said King. “If [the Japanese fans] love Bob Sapp, wait till they get a fucking load of me.”