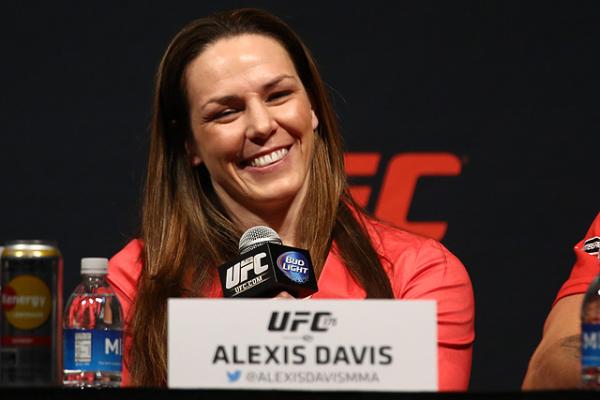 UFC Fight Night: Rozenstruik vs. Gane was cut from three female bouts to two when one of Ashley Yoder’s cornermen tested positive for COVID-19. This forced a rescheduling of Yoder’s bout with Angela Hill.

The two remaining contests were exciting for different reasons. Alexis Davis put on a beautiful performance against Sabina Mazo, while Montana De La Rosa and Mayra Bueno Silva engaged in an incredible fight.

Let’s take a look at both bouts.

Davis defeated Mazo via unanimous decision, but there’s not a whole lot to write about. It was three rounds of the same thing. I thought Davis would look for takedowns off of Mazo’s kicks, and that is just what she did.

Mazo started out having success on the feet and landing some really good punches in the first frame. Then, she went to throw a kick just as Davis was coming in. This allowed Davis to get Mazo down and land on top. Davis was active enough to keep the position, while Mazo was unable to escape.

In round two, Davis got it down quicker. Round three was pretty similar. So, let’s take a look at what worked for Davis and where Mazo could have maybe tried alternatives.

Davis knew that when she got close, she was getting lit up by Mazo, who was clearly the better striker. Davis was putting herself at risk whenever she got in close. She was very smart in allowing Mazo to throw while not pouncing on the first kick. Davis let Mazo throw a couple, which might have brought her guard down a bit. Then, when Davis saw the right opportunity, she got in on the takedown.

It’s just common sense. What’s easier to take down: a one-legged opponent or a two-legged opponent? Obviously, it’s the former. Davis waited until Mazo would not be able to get her leg back down in time and grabbed at the kicking leg to take down Mazo.

When she was on top, Davis wasn’t overly aggressive, which could have led to a mistake or given Mazo space to stand up. At the same time, Davis was active enough with strikes, advances and attempts to where there was never any danger of being stood up. She also didn’t have much fear. She knew she wasn’t going to get submitted, so she was able to do things without putting herself at any risk. Simply put, Davis fought a smart, safe and beautiful fight.

Once it was clear what the best route was for Davis to get it to the ground, Mazo could have limited those opportunities. She knew from the first two minutes of the fight that she could land punches on Davis. Everything she threw was landing and hurting her opponent. Yes, kicks are a big part of Mazo’s offense — just check out her two Legacy Fighting Alliance knockouts — but she could maybe have thrown less of them here. By doing so, she could have forced Davis to engage on the feet for longer.

Mazo could have thrown her kicks at the end of combos, too. It would have forced Davis to take punishment in order to attempt to catch the leg and maybe even made her unable to succeed in catching it. If Mazo mixed up the combos before the kick, it also would make it harder for Davis to get the timing down.

On the ground, Mazo seemed more focused on trying to get a submission off her back than she was on escaping from the bad spot. Now, despite what Michael Bisping would have you think, at no time was she close to getting the submission. Against Davis, it’s hard to imagine that there was ever going to be a legit threat. This helped Davis in two ways: 1) it actually gave Davis opportunities to get herself in a better position; and 2) it kept the action going, which made it impossible to force the ref to stand them up. Mazo might have been better off looking to scoot to the cage to try to stand or in holding onto Davis tighter to her from doing anything, which would have forced a stand-up.

What’s next for Davis? Yana Kunitskaya, who is coming off a recent win.

These two ladies fought to a majority draw. The fight was nothing that I expected or wanted, but I was completely fine with that. It was a great fight.

My expectation was that we would see a ground battle, with Silva possibly looking to do some work on the feet as well. Right out of the gate, they were throwing hard punches. De La Rosa’s striking is ever-improving, and she showed it here. While she didn’t have the power to match Silva, she was landing very well. I think Silva was unprepared for that. Silva was having quite a bit of success herself, though.

Late in the first round, De La Rosa went for a takedown. Silva blatantly used a fence grab to prevent it, but this led to a point deduction. Now, I am someone who herself had a bad run-in with blatant fence-grabbing to prevent takedowns in a fight, so this hits a little close to home. However, I don’t feel that you had to have experienced that to know how blatant this was and that the point deduction Silva received was warranted.

The rest of the first frame was pretty even. Scoring becomes important in this round. If you felt De La Rosa won, then it becomes a 10-8 round. If you scored it for Silva, as I did, then it was a 9-9 round.

Round two was all De La Rosa. Silva began to tire, and De La Rosa seized the opportunity to get it to the ground and really go to work. She landed a lot of hard shots. The only problem was that there were numerous punches to the back of the head. Only after Silva complained to the referee for a second time did he even issue a warning to De La Rosa. It wasn’t just one or two strikes, either. It was quite a few that landed to the back of Silva’s head. Was a deduction warranted? No, so I am glad a point wasn’t taken. However, I would have liked to have seen a stand-up. Somehow, the ref did not see enough of them to make that call. These illegal blows aside, it was a beautiful round by De La Rosa.

Silva came back in the third round and really impressed. She was clearly tired to the point that the corner of De La Rosa called attention to it, yet she somehow fought through it and had success in several areas. She did well on the feet and in the clinch. She really busted up De La Rosa’s eye and had it badly swollen. Silva worked harder and harder, which led to more and more landed shots. De La Rosa seemed to be both hurt and tired. To De La Rosa’s credit, though, she didn’t stop trying. Even while getting beat up, De La Rosa fought till the final bell. It was a clear Silva round, but in no way was it a 10-8 round, as one judge scored it.

At the end, two judges had it even. The one who gave Silva the 10-8 third scored it for her, 28-27. Now, those who say Silva would have won without the point deduction are sort of correct. However, that is not necessarily true. While they ended up scoring that first round 9-9 due to the cage grab, De La Rosa would have otherwise gotten that takedown and could have earned a 10-9 score of her own has she done anything on top. In that scenario, De La Rosa actually would win with two 29-28 scores and one 28-28 (for the judge who scored it 10-8 in the third). So, yes, grabbing the fence cost Silva a point, but it might have actually also saved her from losing the round.

What’s next for each fighter? I would love to see a rematch.

This week, I have a big commitment and will have very little time, so I will be skipping my preview for this coming weekend. Depending on time, I might be able to review the weekend’s fights, though.