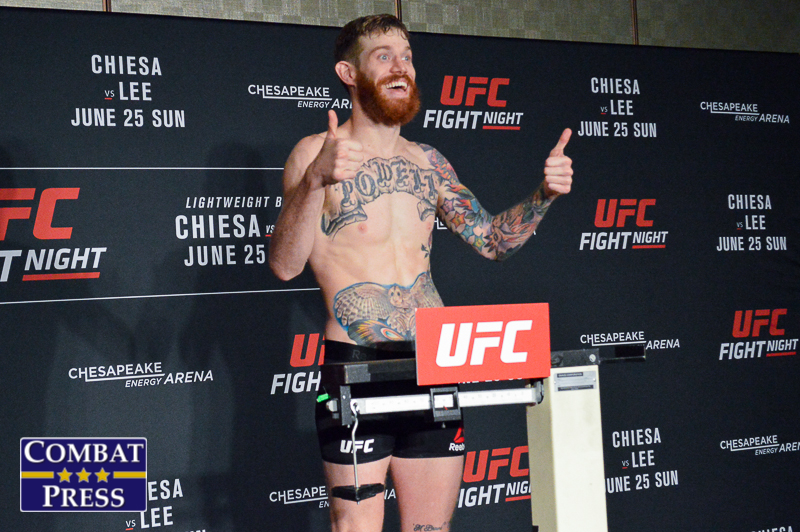 In Greek mythology, the term “Nostos” was used when describing soldiers returning from the Trojan War. The term essentially means “to arrive at your final destination,” and for UFC and Bellator veteran Devin Powell, it is a culmination of a decade’s career in MMA. It is also the name of his gym.

Powell began his career in 2012, going 3-1 as a pro before buying the gym he now calls home a year later. With this, Powell became a business owner and mentor to his students, as well as already being a professional athlete. This new venture brought about challenges in Powell’s career.

“When I made that jump, I had to lose a lot of my coaches, because I became the coach for others,” Powell told Combat Press.

Despite some difficulties, Powell has had an impressive career. He captured the NEF title, as well as having finished opponents in both the UFC and Bellator. Moreover, his guillotine submission of Marcos Surin at Bellator 232 became an internet sensation, with over 40 million total social-media views. He cites his win over Surin, with “a packed arena, thousands of people chanting ‘Pigfather’” as one of his most treasured moments. His first-round, liver-kick knockout of Alvaro Herrera at UFC on Fox 30 was another high-profile moment in the Maine native’s career. Powell’s accomplishments are remarkable, especially given that he was running a gym and did not have a team behind him.

“My entire pro career, I’ve been my own head coach,” said Powell, whose responsibilities and students take precedent over combative strategy.

If one word could describe Powell’s career, it would be “heart.” This was evident in his 2018 UFC fight against Jesus Pinedo in Argentina.

“Early in the second round, I got a hyphema in my eye,” Powell said. “The blood completely obstructed my vision. I was completely blind in one eye for the rest of the night.”

After the referee called for medical assistance in between rounds two and three, the ringside physician cleared Powell to continue fighting.

“If he tried the finger test, I wouldn’t have been able to tell him,” Powell admitted.

Powell continued to fight despite a horrific injury.

“Mentally, it really messes you up,” he said.

“The whole gym was gone when we were flooded,” he explained. “We lost a lot of students.”

Despite the distraction, Powell still fought Pinedo. He lost a close decision. The culmination of difficulties Powell faced in this fight, both with his gym and personal injury, only speak to his character in continuing his career.

The coronavirus (COVID-19) pandemic has been extremely difficult for small-business owners, notably gyms where social distancing measures are all but impossible. All round the globe, membership and attendance in gyms has dwindled.

“We lost more than 50 percent of our students when COVID hit, but now we’re back to better than ever before,” Powell noted.

After being defeated by Manny Muro at Bellator 252, Powell laid his gloves down in the cage, announcing his retirement. It was a stark contrast between his viral promotional debut and the empty arena where he finished his career.

“Financially, the juice isn’t worth the squeeze anymore,” he said.

The foundations he has made with the gym leave him in a great position post-retirement. One of his biggest aspirations now is to act as a coach, cornerman and mentor to his young fighters.

“I have so many good guys developing,” said Powell. “I like to train with them, but I need to train them.”

Whilst he runs a family-friendly gym, Powell has a clear dedication to help improve and guide both the amateurs and pros he trains. With his lack of a solid coaching base in his own career, Powell feels it is vital to add stability and direction to the young fighters he influences.

“It’s crucial for me to give my guys what they need,” he said.

Whilst littered with highs and lows, Powell’s career must be given a tremendous amount of respect. He took ownership of a gym in his mid-twenties, after having begun his career a little over two years previous. The bold act of selflessly putting others in his community first must be commended.

“I’m really happy where I am,” Powell admitted. “Everything doesn’t always happen for a reason, but I think this time it did.”

With this gym, his fighters, and his family, it is clear Powell has now arrived at his own “Nostos.”