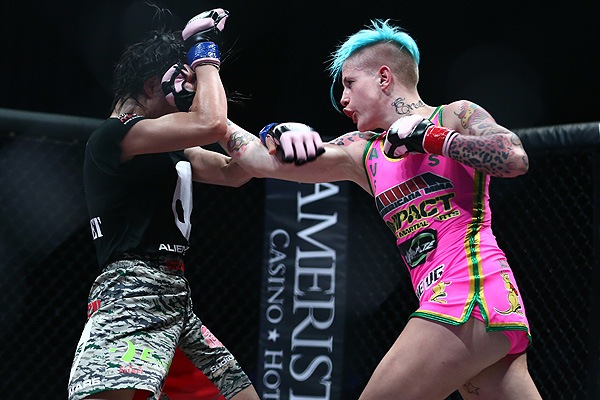 Bare Knuckle FC’s Bec Rawlings: ‘This Sport Was Made for Me’

In the world of combat sports, athletes are frequently forced to change and adapt. Whether it’s surviving in the heat of battle or competing in a different sport altogether, there’s always something new to experience and opportunities to learn.

Australia’s Bec Rawlings is living proof of this reality.

The 29-year-old recently saw her tenure with the UFC come to a halt. Instead of looking for a few wins on the regional MMA circuit, Rawlings is mixing things up and competing on the inaugural event from upstart promotion Bare Knuckle FC. The event, which takes place Saturday, June 2, in Cheyenne, Wyo., marks the first sanctioned bare-knuckle boxing event in over 100 years in the United States.

“I’m really excited for this event, and I’m really happy I can be a part of the first sanctioned event in so many years,” Rawlings told Combat Press. “I can’t wait to get out there and throw these money makers.”

Not many professional athletes have actual experience competing in bare-knuckle combat, but Rawlings didn’t earn the moniker “Rowdy” without a few unsanctioned run-ins through the years. With her fighting resume, she’s confident her skills will translate to the format.

“I grew up pretty rough,” admitted Rawlings. “I love to fight, and when they approached me, I didn’t hesitate to say yes. I’m excited about being able to showcase my boxing skills without the threat of a takedown or kicks, that’s for sure. No gloves isn’t too far off from MMA gloves, so I’ve adapted well compared to a pro boxer that’s always boxed in [big] gloves.”

Rawlings’ assessment of how well MMA experience translates to bare-knuckle fighting compared to traditional boxing will be put to the test in the ring. She’s set to meet Alma Garcia, who comes from a professional boxing background.

“She’s never fought bare knuckle; MMA is the closest thing to that. So, I definitely think I have the advantage,” said Rawlings.

After numerous fight camps in both Australia and the United States, the veteran finds the change in routine refreshing. Instead of spending hours bouncing between disciplines, Rawlings has been able to focus solely on her hands.

“It’s definitely different with the hand conditioning and drilling bare knuckle,” she explained. “It’s been a really good camp — less strenuous on my body without the wrestling and grappling.”

Despite her current focus on bare-knuckle fighting, Rawlings isn’t done with the world of MMA. In fact, she believes her current situation is just a minor detour on her combat-sports journey.

“I definitely don’t feel like I was done there,” said the fighter. “MMA is always going to be my first love, and you haven’t seen the last of me yet. I’m looking to get back on the winner’s board, and I will come back to the UFC to put a stamp on the 125-pound division.”

Although things didn’t pan out for Rawlings in the Octagon, she has learned from what transpired over the last three years. From finding the right weight class to enduring the realities of the industry, each fight taught her something new.

“I had some rough fights with weight cuts. I shouldn’t have killed myself to make 115 pounds. I should have stayed patient and waited for the 125-pound division. It was detrimental to my health, my performances and my chin. It’s a hard pill to swallow,” said Rawlings.

“I loved fighting for the UFC,” she added. “It was definitely a great experience regardless of fights won or lost. I never turned down a fight to protect my record. It’s a cutthroat industry and no one is irreplaceable. You have to go out there, fight your ass off and earn your spot on the roster every fight.”

For now, Rawlings will have to use her UFC ousting as motivation and chalk it up as a lesson learned. When she steps into Bare Knuckle FC’s “squared circle” on June 2, she’s entering a new chapter of her career. How she’ll adapt is up to her.

“I’m going to go out there and fight my ass off,” she declared. “This sport was made for me!”

Rawlings would like to thank her friends and family that have always supported her, as well as her sponsors: Loan U, Final Haven Tattoo Studio and Muscle Meals Direct. Follow Bec on Twitter: @ RowdyBec
Advertisement