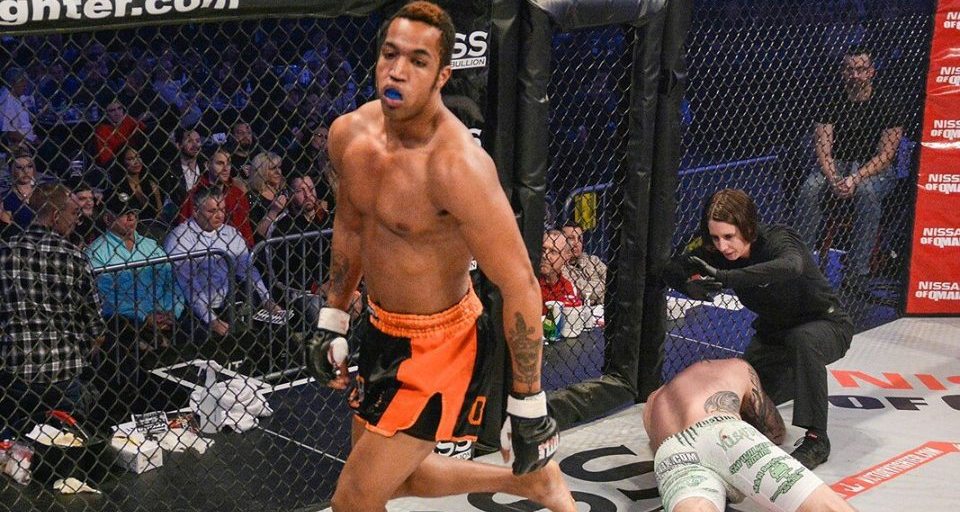 VFC Fight Night 2’s Ivey Nixon: Fighting For the Thrill of It

While opportunities in amateur combat sports are vast, not every fighter rises to the occasion every time. Ivey “Hardstyle” Nixon, however, has never had that problem. Since first entering the MMA scene less than a year ago, Nixon, 3-1, has shown that when he steps in the cage, he’s ready for anything.

Prior to MMA, Nixon found success in amateur boxing and kickboxing/Muay Thai. The Junction City, Kan. native earned an amateur boxing record of 9-3 and an impressive amateur kickboxing/Muay Thai record of 9-0. In 2014, Nixon competed for and earned the Thai Boxing Association (TBA) Super Middleweight title and the StriKing Fights Light Heavyweight title, which he plans to defend this year.

The transition from boxing and Muay Thai to MMA appeared seamless for Nixon. His MMA debut came abruptly when Victory Fighting Championships needed a middleweight amateur to step up on short notice. That night, he fought Qshawne Pryor in what was one of the best fights of 2014 for VFC. Since then, Nixon has made short work of his opponents on the VFC canvas with three straight TKO victories. Nixon will return to Nebraska to fight for VFC on June 6 where he expects to earn another stoppage win.

“I predict a first-round TKO,” said Nixon. “I have to make an example out of every fighter I fight to prove I deserve to be the pound-for-pound champion of the world.”

Training out of Rico Steele MMA and Fitness, the eager welterweight says he’s currently not in fight camp, because he doesn’t do fight camps. After 25 amateur fights, he feels he has a routine that works for him. And after six straight first-round TKOs between MMA and Muay Thai combined, it is evident Nixon’s strategy is working.

“I don’t do training camps. I literally work wrestling with my coach Donald Holiday a week or two before the fight, but that’s it for training really,” explained the fighter. “I already have my own system of doing things, so no one bothers me if it’s for stand-up. I do admit my coach Marcus, is helping with my jiu-jitsu all the time. RS MMA and Fitness [is] a Bang Muay Thai affiliate with head coach Duane Ludwig, so I can’t go wrong having him on my team.”

After VFC Fight Night at Harrah’s, Nixon looks forward to VFC returning to his home state so he can fight in his own back yard.

“I hope to make my pro debut when VFC returns to Manhattan,” he stated. “I’m positive it will sell out faster than last time. I had so many people that wanted tickets, but I couldn’t because the show was sold out. This time they will get their seats as soon as I announce it.”

For now, Nixon is focused on the task at hand: entering hostile territory and earning another dominant win.

“I am happy to fight outside of Kansas because I’ve been having a hard time finding competition.”

Although Nixon is still an amateur, he’s thankful for the way he’s treated while fighting for VFC.

“My favorite part of VFC is the media promotion,” he declared. “Amateurs gets treated like a pro; you get the media weigh-in, they get the fight on video so it either goes on YouTube, or you can buy the DVD, plus afterwards you get all the photos posted to the internet of your fight.

“Really makes you feel good on the inside, like you made it.”

While a timeline to turn pro is still tentative for Nixon, he has all intentions to become a professional fighter.

“My life outside of fighting is just not paying the bills, so money is the main motive, but to also get more competition. There’s not great competition in amateur MMA,” he proclaimed.

Reflecting on his amateur experience thus far, he credits Jake Ewing for being his toughest competition to date. But more than anything, Nixon enjoys fighting for the thrill of it

“[It’s] the adrenaline and rush of intensity… being able to let go of your emotions and power without worrying about the consequences, really testing yourself,” said Nixon. “Imposing your will on someone and proving to yourself how strong your heart is.”