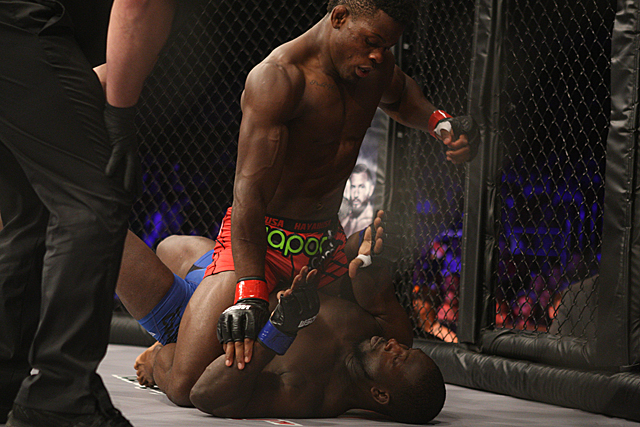 The show’s sixth episode of the new season takes place on September 8. The ESPN+ stream gets underway at 8 p.m. ET.

Khizriev may be a welterweight taking a fight here at middleweight, but he is still the best overall prospect on the card. The 30-year-old Russian has been beyond dominant since beginning his MMA career in 2014. He is coming off a 58-second knockout of UFC veteran Rousimar Palhares. He also owns a victory over Yasubey Enomoto, a longtime veteran of the Russian MMA scene. Khizriev is very well rounded. He is a dominant wrestler with submission skills, and he is also a nasty striker. Khizriev has a huge test against Henrique Shiguemoto here at the Contender Series. If he succeeds, he will prove to be a problem at whatever weight class he joins in the UFC.

Bantamweights always bring it, and the fight between Martinez and Rodriguez has the potential to be an above-average bout even by UFC standards. Both guys go pedal-to-the-metal from bell to bell. Martinez is a knockout machine and a headhunter, which presents the possibility of a massive knockout finish for the highlight reels. Rodriguez is an aggressive finisher who will bang with Martinez while holding his submission wrestling in his back pocket. There is no doubt this will be the most exciting bout of the bunch, assuming it doesn’t end too quickly.

Just three fights into his pro career, Nchukwi looks to be a really solid prospect. He needs more cage time, but, from what we’ve seen so far, he’s quite talented. The 25-year-old is an outstanding athlete and a very powerful man. He throws heavy leather on the feet and has never seen the judges while amassing three knockout finishes. Nchukwi is coming off a massive win where he bested top light-heavyweight prospect William Knight in just two and a half minutes. Now, he has a tough-as-nails opponent in Matavao on his plate. Can he blast through Matavao’s chin? If the answer is yes, Nchukwi will prove he’s ready for the next level.

The Long Shot: Bestaev and Hawes

Despite a 10-3 mark, Bestaev has not fought since 2018. His wins have come over subpar talent for the most part, and he had lost to guys he theoretically should have beaten. He is a finisher and does get good reps training at American Kickboxing Academy, but he has a lot to prove, especially on a card as loaded with talent as this one.

Meanwhile, Hawes is likely looking at his last chance to crack the UFC roster. In 2016, the highly touted prospect lost to Andrew Sanchez in the elimination round of The Ultimate Fighter 23 and therefore failed to even make it into the house. Hawes went back to the drawing board, but the hype train was halted once more in the World Series of Fighting, where he was submitted by Louis Taylor. Despite the loss, Hawes was given another chance during the 2017 season of the Contender Series, where he was absolutely destroyed by Julian Marquez. Many would have thought that he had used up all of his lives, but Hawes has now rattled off three wins and moved from Jackson-Winkeljohn MMA to Hard Knocks 365, so perhaps the change of scenery has been good for him. We shall see come fight time.

Nchukwi is too good of a prospect for UFC President Dana White to pass on. He is a savage finisher who should score a knockout win over Matavao and then sign a contract.

Khizriev will score a competitive win over Shiguemoto and impress the brass in the process. He will drop back to his original weight class of 170 pounds, where he will be a terror in the UFC.

Martinez should contend for the “Fight of the Night” nod. After Martinez engages in a brutal firefight with Rodriguez, the UFC boss will be impressed enough with the performance and entertainment value to sign Martinez.