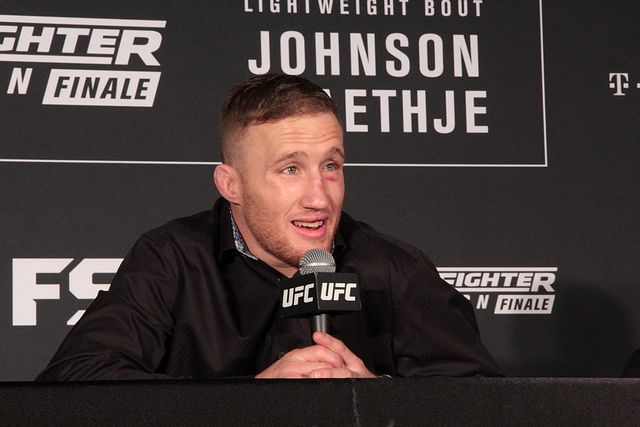 Dropped from the rankings: Blagoy Ivanov (10)

It was a very busy month for the heavyweight top 10. UFC 249 featured former title challenger Francis Ngannou against undefeated Jairzinho Rozenstruik. The third-ranked Ngannou needed just 20 seconds to derail Rozenstruik’s hype train and ascension through the rankings. Ngannou remains firmly planted at No. 3, while Rozenstruik stays in eighth. Ninth-ranked Alistair Overeem was in the cage at UFC on ESPN 8, where he survived an early onslaught from Walt Harris before securing a second-round TKO. Overeem keeps the No. 9 spot with the victory. Blagoy Ivanov faced off with Brazil’s Augusto Sakai at UFC on ESPN 9. The back-and-forth fight ended with Sakai claiming the split decision. The result knocks Ivanov from the rankings and opens the door for Ryan Bader and Sakai to each grab a share of the No. 10 spot.

Only one bout in May featured top-10 light heavyweights. It occurred at UFC on ESPN+ 29, where former title challengers Glover Teixeira and Anthony Smith locked horns. After early success by Smith, Teixeira turned the tide and battered Smith en route to a fifth-round TKO. Smith tumbles down the rankings with the loss, landing in eighth, with Teixeira sliding up to seventh.

UFC on ESPN 9 served as a changing of the guard in the welterweight division, as Brazilian Gilbert Burns thoroughly dominated former champion Tyron Woodley over the course of five rounds. Burns nearly finished Woodley in the fight’s opening frame before cruising to a lopsided decision win. Woodley drops from second all the way to sixth with his second-straight lackluster performance. Burns claims Woodley’s spot with the impressive victory and may have earned the right to challenge teammate and champion Kamaru Usman next. Meanwhile, former lightweight champion Anthony Pettis took on fellow veteran Donald Cerrone for a second time at UFC 249. The back-and-forth affair ended with Pettis taking home a decision win, which moves him into a tie for 10th in the division.

The biggest win of the month belonged to former World Series of Fighting champion Justin Gaethje. The Colorado-based fighter took advantage of his opportunity at UFC 249 to completely dismantle second-ranked Tony Ferguson and capture the interim lightweight title. Gaethje vaults to second in the rankings, while Ferguson dips to third. Elsewhere in the top 10, Brazilian Edson Barboza made his featherweight debut at UFC on ESPN 8, where he fell via split decision to Dan Ige. Barboza exits the 155-pound rankings with the move. Eighth-ranked Donald Cerrone also lost in May, but the bout came at welterweight. The veteran has not announced his intentions of which division he plans to compete in next.

UFC 249 was an important event for the bantamweight division, not only for the future, but also its history. Current champion Henry Cejudo squared off with former long-reigning titleholder Dominick Cruz. Cejudo became the first to stop Cruz while retaining his title. However, Cejudo promptly retired and relinquished the belt. Our six-month retirement rule remains in effect, thus Cejudo continues to hold the top spot in the rankings.

If third-ranked Henry Cejudo is truly walking away from the sport, his legacy is quite strong. He exits having held and defended UFC belts in two separate weight classes to accompany his Olympic gold medal in wrestling.