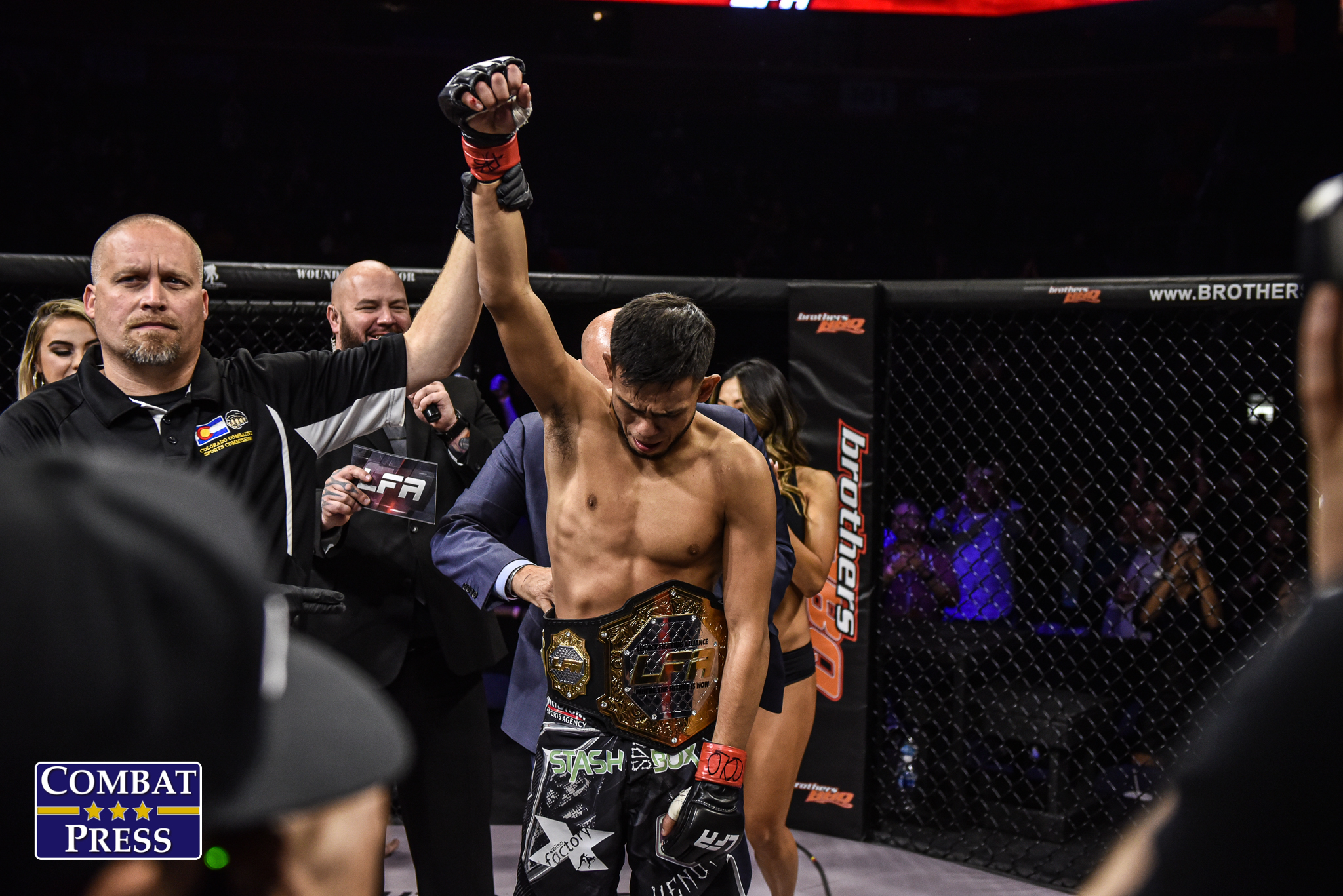 Ask 10 people their thoughts on 2020 thus far, and you will get 10 different answers, all of which still carry the same resounding theme: It’s been madness. However, not all is bad in the world. Unemployment is already slightly improving, people are learning to be more self-sufficient, pollution seems to be reduced for the time being, and the UFC was able to bring live combat sports back into the fold.

All things considered, it’s been a pretty decent year for flyweight up-and-comer Brandon Royval, too. He’s been one of the fortunate fighters to always have something on the docket. He’s coming off a Legacy Fighting Alliance flyweight title win over Nate Williams in November. The lead-up to that one was crazy, though. Royval had multiple opponents pull out, events canceled, injuries, and even a break-up with a former girlfriend. However, he came in and scored a quick armbar victory.

“My last fight was a little bit of a wild one,” Royval told Combat Press. “I knew he was going to run across the cage, and I also kind of knew he was going to go for a takedown. So, it played hand-in-hand with what I was planning on doing anyway. I came across the cage and threw a knee, which landed, and then he came up into a single-leg [takedown attempt]. I was trying to do the normal escape and then I was like, ‘Fuck, let’s just try to land a head kick.’ When I missed, I landed in a good position to just start attacking submissions. It worked out really well.”

A couple months after the LFA title win, a new virus started creeping across the world. By March, everything was being canceled or closed — travel, sports, schools, gyms, hair salons, and retail stores. Meanwhile, UFC President Dana White was putting together contingency plans.

It was announced in mid-March that the organization was planning to hold the fourth season of Dana White’s Tuesday Night Contender Series this summer at the UFC Apex in Las Vegas. Royval was scheduled to rematch past opponent Jerome Rivera, who, in their first outing, dislocated his elbow about 30 seconds into the fight and lost as a result of the injury. Royval had to keep training, even though his gym, Factory X Muay Thai, was forced to close its normal operations.

“It’s been really weird training during this time, and I’ve been having a fight scheduled this whole entire time. I can’t lay off. As far as the other guys go, none of them really have fights or anything coming up. We’re training at odd times. We’re trying to find any gym that will let us in. We’ve been training at boxing gyms, taekwondo gyms, karate gyms. Wherever there is a mat — we’ve been training at parks — wherever there is a place, we’ve been getting it in.”

A couple weeks ago, the UFC finally got back to live action with three events in the course of eight days. All of these shows took place in the empty VyStar Veterans Memorial Arena in Jacksonville, Fla. After this string of events, the groundwork was starting to be laid for a return to regular events. However, there have been a lot of contingencies and last-minute bout arrangements. The next event is now set for Saturday night.

UFC on ESPN 9 takes place at the UFC Apex. It was announced on May 21 that Royval would be joining his teammate Gutierrez on the preliminary card. He’s scheduled to meet veteran Tim Elliott, who is currently ranked 11th in the flyweight division. Royval got the call from his manager, Jason House of Iridium Sports Agency, with the offer.

“I was just laying down, trying to get some sleep,” Royval explained. “It was, like, mid-day. Trying to sleep after that was useless.”

Just like that, he went from a scheduled Contender Series outing against another prospect for a chance at a UFC contract to a contract and an Octagon debut against a ranked opponent. Elliott, who represents Glory MMA & Fitness in Kansas City and 10th Planet Jiu-Jitsu Las Vegas, is no stranger to Factory X. A lot of fighters from Glory and Factory X have cross-trained together, and Iridium represents both fighters.

“He came to our gym for like a week, so we trained hardly, but not much though,” Royval said. “I like that he’s going to bring the fight. He’s an exciting fighter. He has a lot of what I would say are bad habits. I don’t know. I think he has some striking bad habits that I can look to capitalize on. When he attacks from the ground — because he likes to do a lot of ground-and-pound — I think it leaves him open for submissions. There are a lot of options. I think Jerome has fought one dude with a winning record, and Tim has fought the GOAT, Demetrious Johnson.”

Royval took a huge step up, not only in competition, but also in names, when he accepted the Elliott fight. With everything that has happened in the world over the last two months, he is exactly where he wanted to be at the beginning of the year: under contract with the UFC.

“I’m trying to go out there and make a statement on Tim Elliott, go win another fight, and be one of the fucking top guys in my division,” said Royval. “Even beating Tim Elliott right now, I’d be putting my name out there to be one of the top guys in the flyweight division. Flyweight is such a small division [that] I could be in title contention by the end of the year.”

A huge opportunity awaits the Colorado native this weekend. However, Elliott is no stepping stone. He has spent half of his professional career fighting in the Octagon, he won and twice defended the Titan Fighting Championship flyweight belt in between his first and current UFC stints, and he went the distance with the aforementioned Johnson just three and a half years ago.

Royval’s preparations have not just been him and a couple training partners knocking on any gym door that would let them in. He still spends a lot of time with coaches Marc Montoya and third-degree Brazilian Jiu-Jitsu black belt Mario “Busy” Correa.

“I’ve had a lot of opportunities with Busy,” Royval said. “He’s been bringing me into his gym, and we’ve been grappling one-on-one for like an hour straight. It’s been amazing to have a black belt and a guy with that much experience to be training with this whole time. And Marc’s been working with me one-on-one, holding pads.”

It’s been a crazy last 10 months for Royval. As his own personal chaos has settled down, the world’s chaos has only grown. In the midst of it all, though, Royval has come to a very good place, both mentally and physically. This weekend, during a preliminary card that airs live on both ESPN and ESPN+, he will finally have his chance to claim his stake as one of the best flyweights in the world.

“It’s kind of funny,” Royval said. “I had a bunch of injuries before that last fight. Since this quarantine’s been going on and all the gyms are closed, I’ve had a way better training for this week’s-notice fight than I ever had for that LFA title fight. I’m just living life, staying busy, and having fun.”