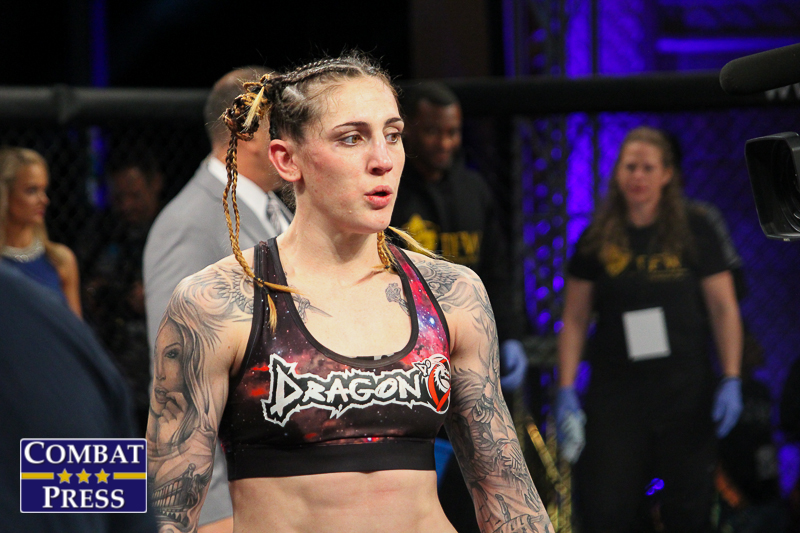 The UFC is entering its second year with the women’s featherweight division in existence. With a season of The Ultimate Fighter taking place that features the 145-pound ladies, you’d think the division would be deep, flourishing and somewhat intriguing to the fans of the sport. However, that’s not the case.

The UFC’s only signee who has previously fought in the division and is a true featherweight has been Megan Anderson. The talent that is out there has been picked up other promotions, such as Bellator. Who’s to blame? Is it solely on the UFC for not building the division? Should the company sign more fighters for the sole purpose of providing depth? Or should the blame go to the fighters for not doing their part in building up interest?

“I think with the UFC, it’s really hard, because they have really much a ‘you need to be marketable; you need to be able to sell’ mindset,” Anderson told Combat Press. “I think the problem with a lot of the featherweights is, they haven’t really grasped and just went with the fact that, unfortunately, this is an entertainment business. You have to be able to sell yourself. You have to be marketable. You have to get your name out. Like, not just through fighting anymore, and I think that is what is making it a struggle for the UFC. And a lot of these girls haven’t gotten on board with that.

“A lot of promotions look at social media. They look at your reach. They look at your engagement. And we just had one of the guys in the gym, fight on [Legacy Fighting Alliance]. It was short-notice fight, and he almost didn’t get put on the fight because he has no social-media engagement. It doesn’t matter about his record or how good he is, it’s based on how promotable you are [and] how many people are going to be looking into you.”

Isn’t it the promotion’s job to promote a fighter, though? In the case of the UFC, shouldn’t it be the responsibility of company head Dana White?

“I get that sentiment, but I got to 200,000-something followers, and a lot of that was during when I wasn’t in the UFC,” said Anderson. “I amassed that outside of the UFC — outside of it — so it’s kinda bullshit. If you want to make it work, you make it work. It is your job to promote you. Yeah, if you have a fight coming up, they will promote you, but if you don’t, why would they promote you over a card that does have fighters fighting? It’s an every-man-for-themselves world, and you have to show some initiative. Why leave it up to someone else to do your job? The UFC’s job is really only to get you fights. The rest is really up to you. The UFC isn’t giving you sponsors — that’s up to you and your management team.”

You can argue all day about whether it should be this way, but your argument will largely fall on deaf ears. Drawing butts to seats and eyes to screens isn’t just about what you accomplish inside the Octagon. Conor McGregor’s charisma has helped him make millions. Derrick Lewis has amassed a huge following because of his humorous ways. Even in the days of Tito Ortiz and Chuck Liddell, it was about the rivalry they built. Brock Lesnar’s pro-wrestling personality helped lead to his success in the MMA world. The fact is, the more pay-per-view buys and the bigger viewership comes from the interesting personalities outside the cage.

The same can go for sponsorships. Fighters complain, many justified, about lack of sponsors. Yet, what are they doing to lock those sponsorships down?

“You are a brand. You are your own business. The more people that see your business, the more opportunities you are going to get,” explained Anderson. “The same with sponsorship. As someone that has 200,000 followers, I’m able to bargain more out of sponsors than if I had five thousand. Unfortunately, this is where it’s shifted, and everything in life changes so quickly. A few years ago, it wasn’t like this. A few years ago, we didn’t have iPhones with face recognition. Now we do. Everything is always growing and always changing. It’s doing that in MMA, and you have to change with it. Otherwise, you get left behind.”

Anderson has diligently and aggressively built up her brand over the course of her MMA career. She’s a constant presence on Instagram, where she shares stories of her day-to-day life and adds fight breakdowns with her friend and UFC analyst Laura Sanko. The work she has put in has helped garner her sponsorships from gaming giant Ubisoft all the way down to Bark Box, which you can see her put to use with the help of her dog, Odin.

“I’ve had the help, particularly over the last year and a half, with, like, a really good management team that has helped with that side of it,” said Anderson. “But they don’t post for me or anything. They don’t do anything on that side.

“Really, it’s just being imaginative with stuff. What really makes you stand out — and I tell the guys at the gym, because they always ask me for advice, and I tell them you have to stand out. There are hundreds of thousands of people that are just like you in the world. What makes you special that people should follow you? For me, I’ve used the fact that I’m tall and I have tattoos. I’m covered with them, and I look different from most people, so I have embraced that and I use that as a tool, whereas for somebody else it could be…

“Like Ilima Lei-MacFarlane, somebody I really like. I love that she’s Hawaiian. She calls herself the ‘Pineapple Princess,’ and that’s her identify, and people really resonate with the stuff she does and the stuff she puts out. You have to find something like that about yourself and almost exploit it. People don’t want to follow people that aren’t relatable. People like funny, down to earth, relatable people that do stupid shit, and you’re like, ‘Oh, I do that,’ and, ‘Oh, they’re not perfect all the time, just like me.’”

In a few days, Anderson head into battle once more in the Octagon. Standing across from her will be Cat Zingano, a perennial contender in the women’s bantamweight division who will be moving up to featherweight. Whether she walks away with a win or a loss remains to be seen. Whatever the result, expect Anderson to remain the same. She’s been that way since before she found success in fighting. There have been no dramatic shifts in her personality or what she puts out on social media. This is what has resonated with her fan base.

“I’m the type of person that will say what’s on my mind, whether it’s controversial or not, and I really don’t give a shit, because we’re all thinking it. ’m just the one saying it,” said Anderson. “I am who I am. I 100 percent know that I’m not for everyone, and that’s OK. There are people in your life that won’t like you. If you follow me, it’s going to be real. I’m probably going to get shit for it, but oh well.”