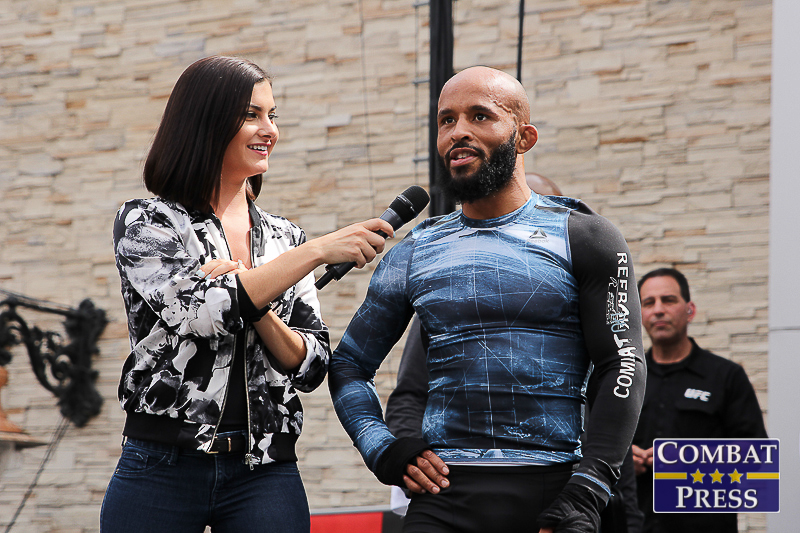 Out of Obscurity: ONE Championship, Combate 41 and LFA 73

This is not your average fight card, even by ONE Championship’s higher standards. Even American fans should be thrilled for an event that features former UFC fixtures Demetrious “Mighty Mouse” Johnson and Eddie Alvarez, title showdowns in both MMA and Muay Thai, the arrival of UFC free agent Arjan Bhullar, and a clash between undefeated up-and-comer James Nakashima and veteran Yushin Okami. There are plenty of fights worthy of discussion here, but we have to focus on Mighty Mouse, still among the pound-for-pound best, and his flyweight — that’s 135 pounds in ONE’s odd weigh-in system — grand prix semifinal battle with Deep flyweight champ Tatsumitsu Wada.

Of course, Mighty Mouse needs very little introduction. The first and longtime UFC flyweight champion was part of a blockbuster “trade” that gave UFC the ability to sign Ben Askren. Obviously, ONE Championship has come out ahead so far in this deal. Johnson, who made 11 successful UFC title defenses of his UFC crown before losing it to Henry Cejudo, made his ONE debut in March with a victory over Yuya Wakamatsu to advance to the flyweight grand prix’s semifinal round. The 32-year-old Johnson has a strong wrestling base, but he’s continually improved his stand-up as well. The AMC Pankration product has 12 submission victories and five knockouts. His losses, including the razor-thin verdict against Cejudo, have all come on the scorecards.

The 30-year-old Wada has been a fixture of the Japanese MMA scene since his 2008 debut with Deep. He had a rough start that included losses in his first five fights. Wada has actually gone a much more impressive 21-5-2 since righting the ship. He failed in a bantamweight title bid against Yoshiro Maeda in 2012, but found gold at the flyweight level with a victory over Yuki Motoya the following year. Just two fights later, he lost the crown to Motoya, but he rode a streak of four stoppage victories to receive another title shot. In his bid for the vacant flyweight belt, Wada decisioned Yuya Shibata. He went on to make two non-title appearances, including a winning effort over The Ultimate Fighter 24 alum Kai Kara-France under the Rizin Fighting Federation banner, before defending his Deep crown against Makoto Takahashi. Wada then joined ONE, where he has only managed two wins in four appearances. Wada, who has a background in karate and judo, holds notable wins over Daiki Hata, Takafumi Otsuka and Ryuichi Miki. He topped Gustavo Balart in April to land opposite Mighty Mouse in this semifinal contest.

Wada is out of his league here. Mighty Mouse was at the top of the UFC’s flyweight mountain for approximately six years, and even his loss to Cejudo wasn’t a convincing one. The UFC’s puzzling disdain for the entertaining flyweight division and its subsequent clashes with Johnson sent the top fighter overseas to ONE, where he has already easily disposed of one opponent. Another victory shouldn’t be out of reach for the former UFC titleholder against Wada, who couldn’t even handle the challenges of Reece McLaren and Danny Kingad.

Mighty Mouse’s last win in the UFC came by way of an impressive transition to an armbar during a throw of Ray Borg. Johnson’s skill set is elite. He topped the likes of Cejudo, Kyoji Horiguchi and Joseph Benavidez in his time inside the Octagon. Wada doesn’t hold a candle to those fighters, and he also carries three submission losses on his resume. Johnson should be salivating for this one. Expect another submission finish from Mighty Mouse.

Zoila Frausto’s return to the MMA world continues this weekend. The kickboxing stylist is one of the featured fighters at the 41st edition of Combate Americas. Frausto, who decimated Jaimee Nievera in February, is now tasked with a more difficult opponent in fellow flyweight Reina Cordoba.

Frausto was once among the best female fighters in the world. She was 12-1 at one point, with her only loss against future UFC star Miesha Tate and victories over the likes of Jessica Penne, Jessica Aguilar and Megumi Fujii. Her success met a sudden end when the Bellator and Invicta veteran went just 1-4 in a five-fight stretch before departing the MMA world in favor of a kickboxing campaign. After a three-year layoff, Frausto returned at Combate 31 with a first-round stoppage of the aforementioned Nievera. During her hiatus from MMA, Frausto went undefeated as a kickboxer with a WBC national title in Muay Thai. She also made an appearance with the GLORY organization in 2017.

Cordoba debuted in 2009 and maintained a steady fight schedule through 2010, upping her record to 4-0 and adding a key victory over the tough, albeit sub-.500 Molly Helsel. After the victory, Cordoba didn’t return to action until 2012, when she defeated Kelly Warren. She went back on hiatus for another two years before returning to score three more victories in 2014-15. After a split-decision loss to Sabina Mazo in late 2015, the Costa Rican fighter against sat on the sidelines for a year and a half before returning for a victory over rookie fighter Alejandra Orozco. That May 2017 fight marks Cordoba’s most recent action.

Frausto’s early career contained more success at strawweight, but her return earlier this year was a sign that she’s ready to dominate the 125-pound division in her new promotional home. So far, it looks like Combate Americas is easing her back into action. Nievera was an easy out, and Cordoba only seems to be a slight step up for the former Bellator standout. Frausto even excels in the one area where Cordoba tends to be a threat.

Cordoba has an aggressive striking game, but she doesn’t hesitate to go for the takedown if her opponent closes the distance. However, Cordoba lacks takedown defense of her own, and the judoka’s grappling can be sloppy. Frausto is unlikely to engage in a ground battle unless she can’t find anything on the feet. This shouldn’t be an issue against Cordoba. The Costa Rican’s aggressive striking will open her up to the more technical attack of Frausto, who should find plenty of openings en route to another TKO victory.

While Levi Mowles and Adrian Yanez are set to throw down in the headliner for the 73rd show from the Legacy Fighting Alliance, it’s the zero in the loss column for Austin Lingo that grabs our attention. Lingo, a featherweight, is set to take part in the co-headliner, where he meets Chris “Solo” Hatley Jr.

“Lights Out” Lingo made a habit of turning out the lights on his opponents all the way back to his amateur days. He scored knockouts or TKO finishes of his first three ammy opponents. In his fourth amateur fight, Lingo was the one to fall, lasting just 18 seconds against Charles Williams. Undeterred, the Fortis MMA fighter turned pro in 2017 and avenged his lone ammy loss with a decision nod over Williams at LFA 16. He’s added another five victories, including two knockouts and two submissions, to his record. The 25-year-old’s highlights include a 35-second guillotine-choke submission of Josh Foster, a 13-second knockout of Aaron Webb, and a 25-second rear-naked choke of Angel Luis Cruz.

Hatley is also early in his MMA career. Solo dropped a few opponents of his own en route to an 8-2 amateur mark. The 22-year-old stumbled out of the gates in his pro debut for a quick submission loss, via rear-naked choke, against B.J. Young. Hatley rebounded with six straight wins, including three knockouts and one submission. Most recently, he needed just two minutes to finish TeeJay Britton at LFA 67 in May.

Hatley does have some power, and Lingo has been finished via strikes before, albeit as an amateur. Hatley showed a ton of explosiveness, too, when he floored the much taller Britton earlier this year. Lingo, meanwhile, tends to be the more aggressive fighter out of the gates. The undefeated prospect doesn’t waste much time once the cage door shuts, whereas Hatley only has two first-round finishes and only one that didn’t take more than 60 seconds. Even when he was taken down early by Foster, Lingo found a route to victory off his back.

Given the finishing abilities of these men, this is a real toss-up fight. The first man to land a clean shot to the other’s chin is likely to have his hand raised. Hatley can surge forward and land solidly, but Lingo’s sneaky power and countering abilities should give him the slight edge and the highlight-reel finish.

Strike Fighting Championship 3: Time of Heroes: Marif Piraev (28-2-1) vs. Nursultan Ruziboev (21-7-1) This event was rescheduled from July 13. For a preview of this fight, please read the July 11 edition of Out of Obscurity.