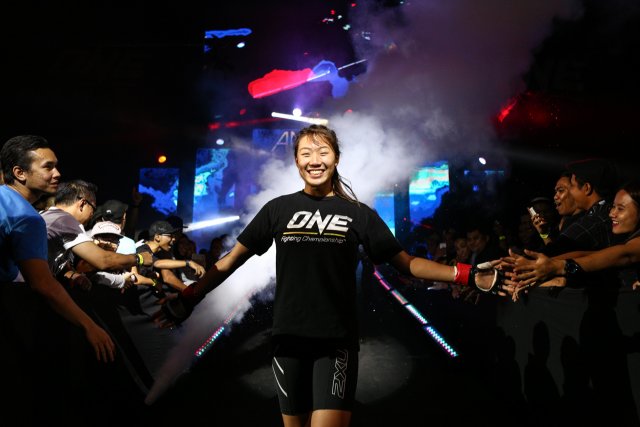 Out of Obscurity: ONE Championship, GFC 14 and Strike FC 3

ONE Championship is hardly one of the little guys anymore, but there’s only so many previews we can churn out right now. As such, the Asian promotion lands back in this preview series. The company’s latest offering, dubbed Masters of Destiny, features a number of excellent kickboxing and Muay Thai affairs. On the MMA side of the board, Angela Lee, the ONE atomweight titleholder, shifts her focus to strawweight — which, with ONE’s unique weigh-in rules, equates to flyweight — for a showdown with Michelle Nicolini.

The 23-year-old Lee debuted in 2015 and has been a mainstay of ONE ever since. She rose through the ranks and claimed the atomweight (115-pound) title with a surprising decision nod over veteran Mei Yamaguchi. “Unstoppable” made successful title defenses against Jenny Huang and Istela Nunes, then defeated Yamaguchi once more to prove the first time was no fluke. Lee stepped up to strawweight (125 pounds), but she couldn’t beat champion Jingnan Xiong and instead fell via a fifth-round TKO for her first pro defeat. She already has a rematch lined up with Xiong in October, this time for Lee’s belt, but she’ll compete once more at 125 pounds here against Nicolini.

Nicolini is an eight-time world champion in Brazilian Jiu-Jitsu. The 37-year-old Brazilian has carried her skill set over into MMA, where she debuted in 2011. The Checkmat fighter has had extended periods of inactivity in the sport while pursuing championships in the grappling realm. However, Nicolini has also had several notable opponents in her time in the cage. In her second fight, she welcomed future The Ultimate Fighter participant Lanchana Green to the professional ranks with an armbar submission. She stumbled in her next outing against Invicta veteran Norma Rueda Center, but rebounded with three straight wins under the ONE banner. Her most recent defeat came in a high-profile fight against Tiffany Teo, who outworked Nicolini for a decision win.

This is an interesting pairing of strong grapplers. Nicolini’s accolades are obvious, but Lee has made a habit of tapping opponents in the MMA realm. These two ladies, who were once training partners at the Evolve camp, are lethal when they hit the mat with an opponent. Lee has proven more consistent, though, when it comes to MMA. She was only defeated in a move up in weight to challenge the aforementioned Xiong, but remains perfect at her more ideal home of 115 pounds. Nicolini, on the other hand, can be outworked. Also of note, Nicolini has submitted Lee in BJJ competition.

The BJJ mat is a far different world than an MMA cage. Lee has a toolbox that includes an ever-improving striking game. She’s been strong on the feet and on the canvas, and she tends to target the weaker area of her opponent’s game. In this affair, she will have to focus on stuffing Nicolini’s takedowns and turning this into a kickboxing contest. Nicolini can be taken out of her element, which we’ve seen in her fights with Center and Teo. Lee is quite capable of replicating this approach.

If Lee goes to the mat, Nicolini will have a chance to get the submission. However, if ONE’s atomweight queen can keep this fight standing, we might be looking at the first stoppage loss of Nicolini’s MMA career.

If you’ve been wondering what the Professional Fighters League is missing in 2019, may we suggest that it’s a featherweight named Timur Valiev. The talented Russian won two regular-season bouts in the 2018 season and was set to appear in the playoffs before he was forced to bow out due to an injury. Now, instead of taking part in the league’s second season, Valiev is competing much closer to home for Gorilla Fighting Championship. At the organization’s 14th show, Valiev meets Giovanni da Silva in a 137-pound catchweight affair.

Valiev’s success goes beyond just his 2018 victories, both by decision, over Max Coga and Bekbulat Magomedov. The World Series of Fighting veteran also helped usher in the PFL era with a submission of Josenaldo Silva at the league’s third show of 2017. As a member of the WSOF roster, Valiev registered victories over such notables as Ed West and Chris Gutierrez, the latter of which avenged a previous split-decision loss. The Jackson-Wink disciple suffered his only other setback in his 2010 pro debut.

Da Silva has had a strong showing on the Brazilian regional circuit, including title reigns with Demo Fight and CEF. He has made one appearance under the Jungle Fight banner, resulting in a win over fellow prospect Rildeci Dias. The 32-year-old also holds notable victories over Stênio Barbosa and Gilberto Dias. The Brazilian has been competing professionally since 2006 and suffered his first loss in his debut bout. He went on a 16-fight winning streak heading into his fight with Magomed Bibulatov, but he was finished via strikes by the current UFC fighter. Da Silva would have an even stronger resume if not for two of his slated opponents, Leandro Higo and Dileno Lopes, failing to make weight, leading to scrapped bouts. The Hikari product has scored seven submission victories, and he also has six wins by way of knockout. In addition to his official fights, da Silva was also eliminated in the qualifying round of The Ultimate Fighter: Brazil when he was submitted by John Teixeira. He did return on The Ultimate Fighter: Brazil 4, where he defeated Eduardo Diez. However, he ended up dealing with an infection and was unable to continue on the show.

The breakdown of da Silva’s record might suggest that he’s well rounded, but it’s interesting to note that he scored most of his striking victories early in his career and has relied more heavily on his grappling game as he’s taken on tougher challenges. He’s also bounced between the bantamweight and flyweight levels, which might be an indication that he’ll be undersized for this fight against an opponent who typically competes at the featherweight level.

Da Silva has put up strong numbers, but it’s difficult to ignore his one recent stumble against Bibulatov and the size differential he’s likely to face against Valiev. The Russian has been an absolute force outside of his own misstep against the aforementioned Gutierrez. Valiev has also taken a step up in doling out losses to Coga and Magomedov in recent fights. He should easily control da Silva in this encounter, but he might be content to coast to a decision.

Strike Fighting Championship checks in with its third event, and the company scored big by securing Marif Piraev as its headliner for the show. The welterweight doesn’t carry much name recognition in America, but that’s likely to change soon. Piraev tangles with Nursultan Ruziboev this weekend.

Piraev, 26, debuted in 2011 and rolled to an 18-0-1 mark before suffering his first setback against Mateusz Gamrot at KSW 32 in 2015. He had a turbulent couple of years following the loss. The “Piranha” was scrapped from a May 2016 fight. He was forced out of his next scheduled bout later the same month when he was recalled for army duty. Finally, his next fight was called off when he was hospitalized due to weight-cutting issues. Piraev was able to get his prospect run back on track following more than two years on the sidelines. He returned in mid-2017 and won two fights. He suffered a TKO loss to Tofik Musaev in early 2018, but he has gone on to add eight more victories to his record against varying levels of competition. The Krepost Fight Club member has 14 submissions and five victories by way of knockout. He has twice been stopped via strikes.

Ruziboev brings a seemingly strong record to this fight, but the 25-year-old out of Uzbekistan has done much of his damage against low-level opposition. He does hold a victory over Vladimir Katyhin, who was 40-9-1 entering their bout, but he’s also dropped a decision to a very mediocre Oleg Dadanov. The Max Fighter product has had an especially tough time lately, leading to a 4-3-1 mark over his last eight fights. Ruziboev is a competent finisher who has won a majority of his outings via submission, but he, like Piraev, has a handful of knockouts as well.

Piraev trained alongside the likes of Vitaly Minakov, Ali Bagautinov and Gasan Umalatov. He has a background in boxing and sambo, and he has demonstrated solid striking to accompany his ground game. His first real test came against Benjamin Brinsa, who was briefly under contract with the UFC before the promotion realized that it might have a Neo-Nazi hooligan on its hands. Piraev needed less than two and a half minutes to hand Brinsa, who was undefeated through 13 fights at the time, a triangle-choke submission loss. He continued to fight quality competition and paid for it with losses to Gamrot and Musaev. However, he also profited by way of wins over the likes of veterans Gilmar Dutra Lima and Naoyuki Kotani, as well as prospects Jim Alers and Alexander Makovoz. He has peppered in some questionable fights, though, including scraps with rookies Abakar Magomedov, who lasted just 65 seconds before submitting to a triangle choke, and Eduard Vdovenkov, plus sub-.500 fighter Alexey Valivakhin. Piraev’s biggest weakness might be his willingness to sacrifice position and even fight off his back in hopes of attacking with submissions.

Of course, Ruziboev hasn’t even waded into such deep waters. His experience comes mostly against fledgling prospects, rookies and mid-tier regional fighters. Piraev was likely on track to fight in the UFC before his loss to Gamrot and subsequent hardships, whereas Ruziboev has never been at the top of any prospect lists outside of perhaps his native Uzbekistan. Piraev is definitely a tall task for Ruziboev. In Ruziboev’s favor, he has only been finished twice. Yet, Piraev has an excellent chance at adding to this total with a submission finish.