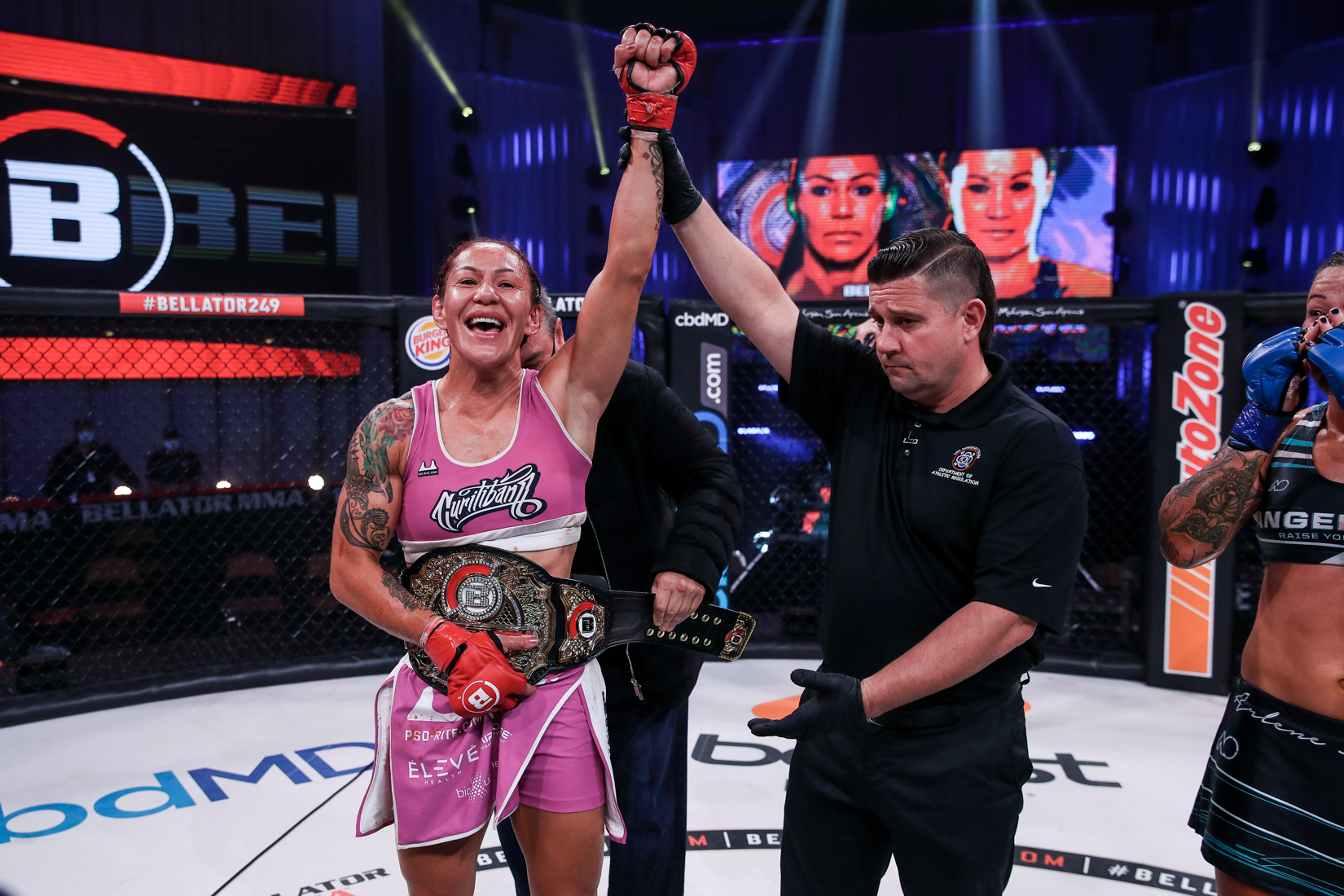 This week, we have two results to go over. To reiterate what I mentioned in my preview, I did not go over and will not recap Jéssica Andrade’s victory over Katlyn Chookagian since I train with Chookagian and want to keep any bias out of these articles. With that out of the way, let’s recap the fights.

In my preview, I hinted that Cyborg might rely on leg kicks and that Blencowe needed to check those kicks, keep her back off the cage, and not go to the ground. Well, Cyborg threw leg kicks, put Blencowe’s back on the cage, and took the challenger down. The Brazilian eventually defeated Blencowe via rear-naked choke in round two.

Right away, it was evident what Cyborg was looking to do, and she did it with relative ease. Part of the problem for Blencowe was the speed in which Cyborg threw the kicks. They came in quick, which at times made checking them difficult. When they come in quick, reaction time is limited. In addition, Cyborg kept Blencowe going backward with those kicks, which served two purposes. First, it prevented Blencowe from getting her boxing going — it’s harder to throw punches when you are moving backwards and constantly being kicked. Second, it put Blencowe closer to the cage, which, with Cyborg wanting the clinch, already meant Blencowe was halfway to where Cyborg wanted her. This in turn meant that less effort was required by Cyborg to put Blencowe’s back to the cage. Think of it like climbing a ladder. What’s easier, climbing a ladder to the second story of a building or to the third story? Obviously, it’s the second story. It’s a shorter distance to reach your destination. With Cyborg’s kicks moving Blencowe backward, it made it a shorter journey to her destination.

Once in the clinch, Cyborg could do whatever she chose to do. If she wanted to, she could have stayed there and thrown her knees, something she is one of the best at doing, or she could have taken it down. Either choice would have been fine, because she’d have the advantage.

With the first-round takedown, it became relevant quickly just how big Cyborg’s advantage was there. Blencowe was no threat off her back, and her only options were to somehow get up or just look to survive. So, for round two, Cyborg had another advantage in her pocket, as Blencowe was going to be hesitant. Any hope Blencowe had that Cyborg would box with her instead of looking to get it to the ground was gone, so now Blencowe was going to be worried when throwing that Cyborg would shoot under and take her down or at least clinch en route to a takedown. Cyborg took her down, and it came so early in the round that the champion had plenty of time to look for a finish, whether with ground-and-pound or a submission. Cyborg got Blencowe’s back and sunk in the choke for the first submission win of her career.

What’s next for Cyborg? This one is sort of complicated. Some people mentioned Cat Zingano. There is also talk of a boxing match with Katie Taylor. I am admittedly not a fan of MMA fighters doing boxing matches. They are great for young fighters looking for experience to improve their game, but, at the elite level, I have never been a fan. The elite boxer will have the advantage against the elite MMA fighter in a boxing match, the same way the elite MMA fighter will have the advantage over the elite boxer in an MMA fight. That being said, the boxing match might be best for the Bellator women’s featherweight division. Let’s say Cyborg fights Zingano next and beats her. Who is next? If Cyborg does the boxing match and is away from the cage for a bit, then it gives Bellator time to build up some contenders. The organization could make some combination of fights between Zingano, Leslie Smith, Julia Budd, Sinead Kavanagh, and maybe Kayla Harrison, if she comes over. Mix and match them and see if a challenger or two emerge. Long term, this might serve Bellator and Cyborg well.

As someone who is considered a “grappler,” I love Robertson’s ground game. In this fight, it was evident why. Even though she didn’t get the finish, she utilized her skills on the mat to defeat Botelho via unanimous decision.

In the second frame, Robertson got it to the ground and just took over. She displayed something that I love about her game. She was very much about taking it one step at a time. She didn’t rush to advance or improve her position. Sometimes when you want a submission, you will rush it and try to go from step one to step four. This leads to mistakes, be it the person escaping, pulling guard, or, worst case, catching you in something themselves. Robertson does not allow this to happen. If she is moving to half guard, it is one step at a time. If she is moving to side control or mount, it is one step at a time. She stuck to this approach here — no wasted movements and no rushing. She was methodical. She was able to land strikes that would get Botelho to move a little, which then opened the door for a step in advancing.

To Botelho’s credit, she did enough to survive. However, that’s all she did. I would love to give a description of round three as well, but you can really just reread what I said about round two. It was a Robertson takedown, great top control, great job picking and choosing strikes, and just giving Botelho no chance to do anything herself. Despite losing round one, it was a dominant performance by Robertson against a very good opponent. Robertson really put herself on the map with this one.

What’s next for Robertson? She called out Antonina Shevchenko after the win. From a rankings standpoint, it’s a logical fight. In terms of styles, it’s a great fight for Robertson. She would have a huge advantage against Shevchenko if she can get it to the ground, and a win over such a big name always helps. However, I want to see her fight Montana De La Rosa. De La Rosa is ranked one spot ahead of Shevchenko, so there’s not much difference there. De la Rosa is very good on the ground as well, so it could make for a very fun fight. I like fighters who show that grappling can be entertaining, and both Robertson and De La Rosa are capable of doing just that.