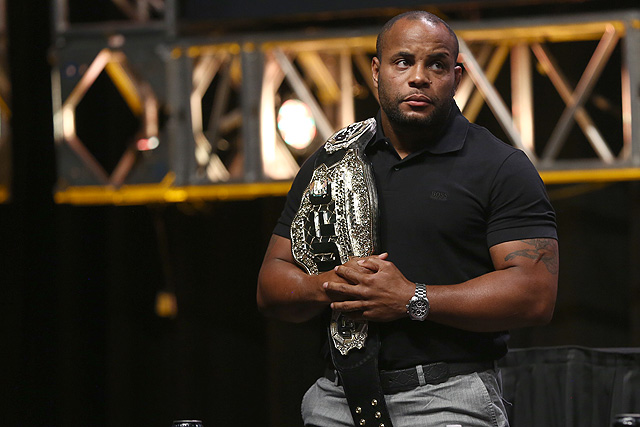 Jon Jones vs. Daniel Cormier II: The Sequel We Deserve

“Because he’s the hero Gotham deserves, but not the one it needs right now.”

Commissioner Jim Gordon, played by Gary Oldman, uttered these words at the end of The Dark Knight, the blockbuster 2008 sequel to Batman Begins. He was of course talking about Batman, who took the blame for Harvey Dent’s death (spoiler alert) so the citizens of Gotham wouldn’t know that Dent became the evil Two Face.

What does this have to do with the UFC? Quite a bit, actually. The Dark Knight was a wildly successful sequel, and the UFC was banking on a wildly successful sequel of its own to complete the biggest card in its history, UFC 200, in July. Featherweight champion Conor McGregor was going to have a rematch against Nate Diaz, after Diaz submitted McGregor at UFC 196 in March.

But instead, Frankenstein’s monster that the UFC created — this would be McGregor, in case that wasn’t clear — is turning on his creators. After McGregor refused to appear at a promotional press conference for UFC 200 last month, UFC President Dana White shelved his rematch with Diaz for that card. Now, White and McGregor, who often appear thick as thieves, find themselves in a standoff with no resolution in sight and dealing with an alleged threat of retirement by McGregor:

I have decided to retire young.
Thanks for the cheese.
Catch ya’s later.

But fear not, mixed martial arts fans. Just as Batman is the hero Gotham deserves, the new main event for UFC 200 is one we truly deserve. Former light heavyweight champion Jon Jones finally gets his chance at redemption when he faces current champion Daniel Cormier for the belt. The bout was originally supposed to happen at UFC 197 last month, but a late injury to Cormier forced him to drop out.

Jones still competed at UFC 197 and looked a little rusty in defeating Ovince Saint Preux. However, that’s to be expected when Jones hadn’t fought in more than a year thanks to a failed drug test, legal troubles stemming from colliding with a vehicle driven by a pregnant woman, a stint in rehab and proving time and again that he shouldn’t be behind the wheel of a car.

Would McGregor/Diaz 2 do big business for the UFC, whether it takes place at UFC 200 or some other card? Of course. According to White, their first meeting helped UFC 196 draw 1.5 million pay-per-view buys, second only to UFC 100 in the company’s history. However, while rhyme or reason bid farewell to the UFC long ago, does it really make sense for McGregor and Diaz to square off again? No, it doesn’t.

As a rule, rematches should only take place when a fight, whether it’s title or non-title, results in a very close and/or controversial decision. The first fight between McGregor and Diaz was neither. Diaz choked McGregor out clean in the middle of the Octagon at UFC 196 and left no doubt who the better fighter was that night.

You could make the argument that Jones/Cormier 2 shouldn’t happen because Jones thoroughly dominated Cormier during their first meeting last year. However, there’s one big difference; Cormier didn’t defeat Jones for the light heavyweight title. Jones was stripped of the belt following his victory over Cormier when his legal issues began, and Cormier won the belt by beating Anthony “Rumble” Johnson at UFC 187 last year. Simply put, Jones deserves his shot at redemption, as well as his opportunity to try to win back the title he never officially lost.

Does McGregor deserve a shot at redemption against Diaz, monetary incentives aside? Not really. If McGregor defeated Diaz in their rematch, then that just means a rubber match needs to happen to determine who the better man really is. Can we be honest with ourselves and ask if we really need to see McGregor and Diaz fight three times?

If redemption isn’t your cup of tea, and you lament missing out on the surely epic trash talk that would resume between McGregor and Diaz, don’t worry. Jones and Cormier have traded vitriol that rivals — and, in my opinion, surpasses — the barbs traded by their UFC counterparts. From their epic exchange on ESPN, to Jones flipping off Cormier after defeating Saint Preux, to Jones telling Cormier that he made him cry, there is more than enough trash talk and bad blood between Jones and Cormier to satisfy even the most ardent McGregor or Diaz fan.

Jones/Cormier 2 as the main event of UFC 200 will answer many questions that we just don’t get with McGregor/Diaz 2. Is Jones truly back as the best pound-for-pound fighter in the world? Will he dominate Cormier as easily as he did in their first meeting? Has Cormier learned from that fight at all. ? Can Cormier show that he’s the new dominant champion on the block?

To bring this full circle, Jones/Cormier 2 is Terminator 2: Judgment Day. It’s Rocky II. It’s a sequel with iconic characters that we need, want and deserve to see. McGregor/Diaz 2 is like Bad Boys 2 or Transformers: Revenge of the Fallen. It’s fun, splashy and will make a ton of money. But it’s not the sequel we need.