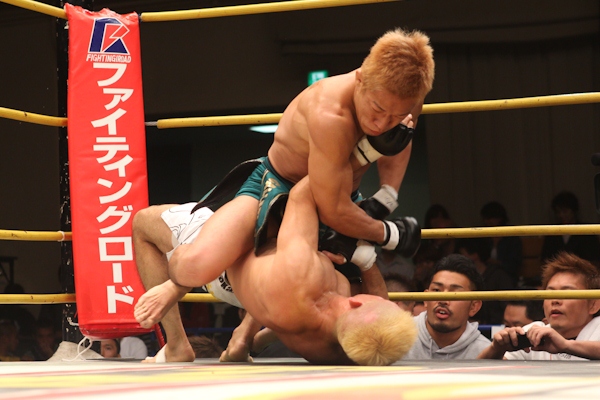 Bantamweights are the name of the game on Sunday’s Rizin 29 card from the Rizin Fighting Federation. The company has tournament bouts set in the weight class for both MMA and kickboxing.

The MMA affairs are a continuation of the grand prix that kicked off earlier in June at Rizin 28. Several notable stars, including Kai Asakura and Hiromasa Ougikubo, advanced during that night of action. This weekend, veterans Takafumi Otsuka and Masakazu Imanari will try to add their names to that list.

Meanwhile, the kickboxing bracket gets underway with the likes of Taiju Shiratori, Ryo Takahashi, Genji Umeno and Koji “Kouzi” Tanaka competing for a place in the next round.

Rizin 29 takes place at the Maruzen Intec Arena Osaka in Osaka, Japan, on June 27. American fight fans can view the action on LiveNow via pay-per-view stream. The festivities get underway at 12:30 a.m. ET.

Rizin continues the opening round of its bantamweight grand prix with four fights. Which tourney fighter registers the most impressive victory of the evening?

None of these fights are one-sided affairs on paper. Veterans like Takafumi Otsuka and Masakazu Imanari can expect to have their hands full, and Imanari might not even advance. However, Kazuma Kuramoto’s violent style should be on full display in his fight against Alan Yamaniha.

Kuramoto has the cleanest sheet of any fighter in Sunday’s branch of the bracket. The 34-year-old has suffered just one defeat through nine pro bouts, and it came to easily his best opponent to date, Ryo Okada. Kuramoto has six knockouts on his resume, including a soccer-kick decimation of Taiyo Nakahara in his most recent appearance at RIZIN.26.

Yamaniha is a 29-fight veteran, but he’s already suffered eight career setbacks. His most recent stumble came in a 2018 affair against Yuto Hokamura in which the Brazilian was stopped via strikes for the first time as a pro. “Hiro” is no slouch, but he delivers mixed results when taking on tough opponents.

Kuramoto has the ability to deliver a highlight-reel finish here and put his name on the map. He may be a bit old to qualify as a prospect in the traditional sense of the word, but he’s certainly a breakout candidate in this tournament field.

The card also features a one-night kickboxing tournament. Which two fighters will advance to the finals, and who takes the tourney title?

Koji “Kouzi” Tanaka is the most familiar name on the docket, and he has a favorable pairing against Genji Umeno, who has already suffered a career loss to fellow tourney participant Taiju Shiratori. Kouzi has been competing in showcase affairs against the likes of Tenshin Nasukawa and Takanori Gomi lately, and a return to a match-up with a less heralded fighter will give him a chance to get back in the win column.

Which non-tournament fight is the sleeper match-up on this card?

The lightweight clash between Yasuke Yachi and Yuki Kawana.

Yachi has been a staple on the Japanese circuit since 2009. The 31-year-old has already had extended stints with Shooto, Pancrase, Pacific X-treme Combat, and Rizin, plus one appearance with Bellator MMA. He’s had an incredibly rough last three years in which he’s gone just 1-5, but this is a guy who holds victories over Takanori Gomi, Daron Cruickshank and Takeshi Inoue.

Kawana also debuted in 2009 and checks in at just one year younger than Yachi. The ZST and Shooto veteran ventured into the Professional Fighters League for the company’s inaugural 2018 season, but he struggled against Islam Mamedov, Chris Wade and Ramsey Nijem. His return to Japan has yielded two wins through three fights, with the one loss coming via split decision.

Yachi has eight finishes on his resume, including six by knockout. Kawana has a better finishing rate, with five wins apiece by knockout and submission. Both men have been handed losses by seriously tough competition — Yachi was submitted by UFC star Alexander Volkanovski in 2015 — but they’re always game. These guys are in need of a statement win, which should lead to a fun affair.