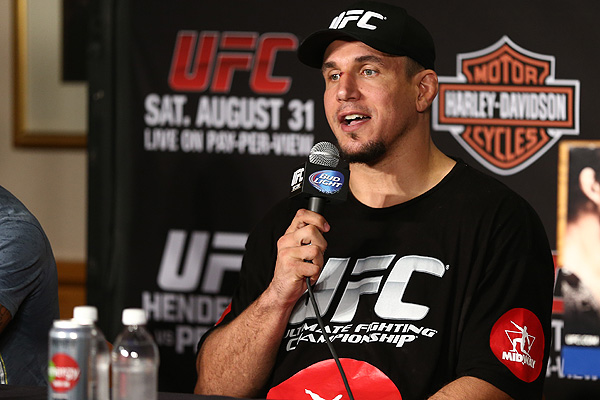 UFC Fight Night 71: Frank Mir Closer to Contention Than You Might Think

When you hear the name Frank Mir, what comes to mind?

When I hear Mir’s name, I’m flooded with so many thoughts and memories of his 14-year UFC career. At first, Mir was somebody I pulled for simply because he looked like MTV Jackass star Bam Margera, one of my idols at the time (thank goodness I grew out of that phase with all my bones intact). He was a fighter who was solidifying his foundation in the sport during the same period of time as many of our all-time favorites were pushing the sport toward a mainstream audience.

Mir has cemented himself as a future UFC Hall of Famer. At the same time, he’s never been the guy that you and a group of your buddies would plan your Saturday night around because you just had to watch Mir fight. It’s interesting how somebody who has been so successful for so long could never really anchor down that hardcore fan base, especially while competing in the heavyweight division.

The primary reason why Mir has not been a tremendous draw could be that he has never rattled off anything greater than a four-fight winning streak. That modest streak occurred in 2003-04 with wins over Tank Abbott, Wes Sims (twice) and the aforementioned Sylvia. Since then, he would win a few, lose one, win one, lose one, win three, lose four and so on.

Mir has seemingly been on the brink of having his career come to an end multiple times, dating back to 2010 after his loss to Shane Carwin in which referee Dan Miragliotta put his blinders on and failed to stop the fight until Mir had his soul knocked out. Following the Carwin loss, it seemed like Mir was always a tap on the chin away from stumbling to the canvas. However, time after time, he proved everyone wrong.

Mir is now battling back from his latest career stumble in which he lost four in a row to some of the best talent in the world. He wasn’t just losing, either. He was getting knocked out.

In his career, Mir has been knocked out seven times. It’s frightening to think about what the future ramifications will be on his health. It could be severe. It could be nothing at all. We just don’t know. That’s what each fighter has to take into account before they leave their gloves in the cage, and Mir has not been ready to do that yet. Not after his TKO loss to Junior dos Santos, or his TKO loss to Josh Barnett. He’s too competitive, stubborn and selfish to give it up. As Mir said in his last post-fight presser, you have to be selfish and put family second to be successful in fighting. He’s clearly leading by example.

Going into the main event of UFC Fight Night: Mir vs. Duffee, I didn’t give Mir a shot. I had seen him stunned too many times, and Duffee has knocked out nine of the 12 guys who have been put in front of him. Prior to the fight, I tweeted that Mir would be knocked out in 17 seconds. About 20 seconds into the fight, it looked like I had only miscalculated the bout’s duration, but not the outcome. Duffee was applying pressure to Mir and trading powerful punches with the former UFC champion. If you were to play Rock‘em Sock‘em Robots with Mir and Duffee, who would you pick? I’d choose Duffee, but that would obviously be the wrong choice. I didn’t give Mir enough credit for his perseverance in working on his boxing. The way he was able to slip Duffee’s punch and knock him out was simply beautiful, and I was stunned.

Mir is now 36 years old, and although he is coming off a knockout victory over somebody outside of the top-10 rankings, his tenure with the UFC and the fashion in which he beat Duffee thrusts him right into the championship picture. The heavyweight division is such a fun weight class right now, and the matchmakers can take Mir’s latest resurgence in a number of ways. Over the next few days or weeks, we will hear dozens of potential match-ups for Mir. Regardless of which of those suggestions becomes reality, Mir’s next fight, should he emerge victorious, is going to be one that will propel him into a title shot. The UFC won’t make Mir climb back up the ladder rung by rung, and that is a nod to Mir for the career he’s had.

Can you picture Mir being strapped with the UFC belt again? It seemed so far-fetched after his lost to Alistair Overeem at UFC 169. He was going the way of the rest of our beloved UFC fighters of the early 2000s, and it seemed like a forgone conclusion that we’d soon hear about Mir’s retirement. Instead of being on the brink of elimination, Mir is as hot of a name as there is in the heavyweight division. I counted him out against Duffee, but I was wrong. If he says he can win the belt again, who are we to doubt it?