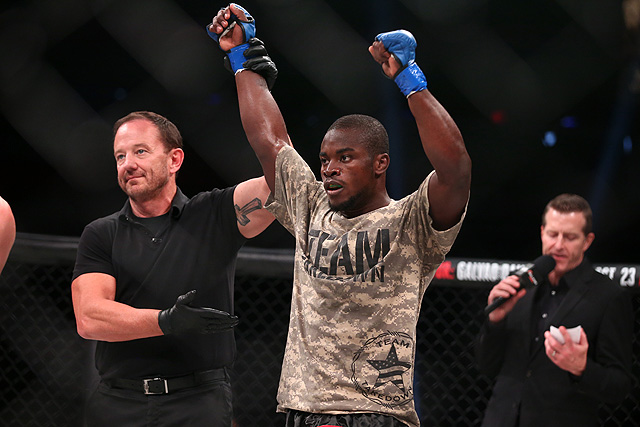 UFC 218’s Abdul Razak Alhassan: Back on the Hunt

Up and down the UFC roster, you’re sure to find unconventional stories of fighters and their paths to fighting. Most fighters didn’t always want to fight in the UFC. More common is that winding roads and different paths took a fighter from doing one thing to landing inside the cage for the premier MMA organization in the world.

Abdul Razak Alhassan’s story starts in Ghana, where he lived until he was almost 18 years old. .
“That’s when I moved here,” Alhassan told Combat Press. “I was born and raised [in Ghana and] started my judo career back home. I came here for judo, because even though [in] Ghana we train really hard, we don’t have the support back home. Nobody wants to back you up with money. So, after moving here, I tried to compete at the World Championships here, and from there, that’s when I got stuck here, living the American dream [laughs].”

Alhassan got “stuck” in Minnesota, working as a baggage handler for Delta Airlines. He continued to compete in judo while attempting to realize his dream of qualifying for the Olympics. That’s when those winding roads diverged. The road took Alhassan away from judo and into a completely different combat profession, kickboxing.

“When I was training, my judo coach that I had here, Steven Wright, was hired to teach kickboxing in the gym,” said Alhassan. “Before his class starts, the judo was already in progress, so he’d always come in there and watch me train. He saw me, said he heard a lot of good things about me and I was very athletic, and he wanted me to be a part of his kickboxing class. I said no, kickboxing is not what I want to do. I don’t have any interest. He said I didn’t have to fight. He just wanted me to do it as a workout, [to] help lose weight for [my] judo fights.

“[I] changed my mind and I was just doing it for fun, and it helped me cut weight. And then, as time went on, about two months, Steve came up to me and said, ‘Hey, I got you a fight,’ and I was like, ‘Wait, wait, wait! I never said I wanted to fight. That’s not we agreed upon.’ He told me, ‘You’re very good. You’re smart the way you fight. Don’t let your talent go to waste. Just try it.’ Once again, he changed my mind [laughs].”

Wright has an eye for talent. He’s now the GLORY Kickboxing scout for North America, so chances are if he thinks you have top talent, you probably do. After convincing a very reluctant Alhassan to fight, things got off to a fine start.

“I won my first fight,” said Alhassan. “I was still doing judo after the fight and the kickboxing just for fun, but I started doing the kickboxing more and sort of transitioning to kickboxing without realizing it. It sort of just happened. Time went on in judo, and nobody really sponsors you — you just do it out of passion. With kickboxing, I was getting paid a little bit, and that’s when I said, ‘OK, let’s get into fighting full-time then.’ I had five kickboxing fights and went undefeated.”

Kickboxing became a stopgap for an even bigger opportunity for Alhassan. He was only a few years removed from Ghana, in a completely new environment and just going with the flow. That flow eventually took him to MMA. Wright, Alhassan’s coach, was hired by Team Takedown. It opened the door for Alhassan to train with an elite UFC talent.

“They wanted him to move to Texas, and I lived in Minnesota,” explained Alhassan. “So he told them, ‘Hey, I have a fighter with me that I really want to come with me. He’s very good. Is there any way he can come with me, live and train with me?’ They said, ‘No, even better, just bring him in to spar with Johny Hendricks, and if he does good and gives him a good workout, we can pay him weekly so he can be Johny’s training partner.’ I was training with Johny a lot and trying to learn takedown defense, and Steve said, ‘Let’s try MMA too.’”

At first, the move to Texas wasn’t a permanent one. Alhassan was able to fly down to the Lone Star State for a few days using his perks as a Delta Airlines employee. He sparred with Hendricks and then flew back home to Minnesota, where he continued to work as a baggage handler for a few days. Then, he decided to finally settle down in Texas after gaining more confidence while going to toe-to-toe with Hendricks.

“Hendricks gave me a lot of confidence as a fighter, because when I was training with Johny, he was a beast. In the gym, if you hit him twice, he was going to hit you like 10 times back and harder,” said Alhassan. “Johny was a crazy beast at that time. He could give you a run for your money. After training with him, I knew if I could take a punch from him and go toe-to-toe with [him], why would I be worried about the person I was going to fight. And it was the coaches we had. The coaches that we had [were] so good. That team was the dream team.”

Alhassan’s start in MMA couldn’t have been drawn up any better. His first six fights didn’t last more than two minutes each. All six fights ended in knockouts, and all came courtesy of a nasty right hand. The call to the UFC finally came in late 2016. The promotion offered Alhassan a slot on the UFC Fight Night 99 card in Ireland against Charlie Ward. That fight also didn’t last long. Only 53 seconds had ticked off the clock before Ward went to sleep on the canvas after a punch.

The following year, in May, Alhassan had his next fight against Omari Akhmedov. This time, the punch landed, but his opponent didn’t fall down. Instead, Alhassan suffered his first loss as a professional fighter.

On Saturday, Alhassan will attempt to avoid that feeling once again. He’s been placed on the UFC Fight Pass prelims for UFC 218, where he goes up against Sabah Homasi. He’s had months to reflect, improve and make adjustments. Will he utilize his judo background? Will he get back to kickboxing a bit more? Nope, Alhassan has a simple adjustment he’s going to make sure he incorporates.

“Look, I’m so pumped. I’m like this berserker, but I have to be controlled. A controlled berserker. As an African, we already know how to hunt, that’s nature. Born in us. Now you just need the strategy to sneak on them and take them out.”

It’s just a few days until Alhassan is back to being the hunter. Detroit becomes his hunting ground and Homasi is the prey.