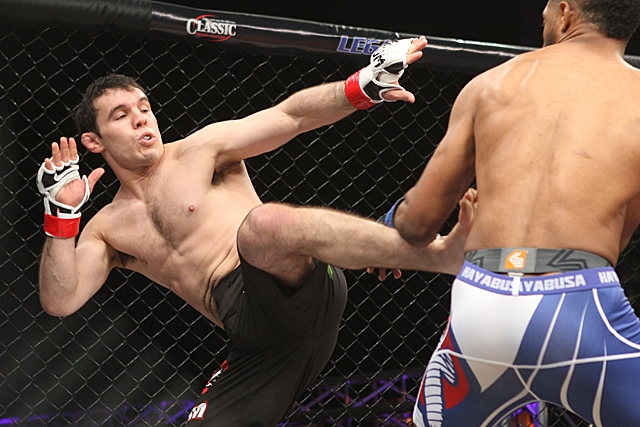 When Legacy Fighting Alliance featherweight Justin “Darth” Rader stepped into the cage at LFA 15 just five weeks ago, he was looking for nothing other than to string together four wins in a row. The world jiu-jitsu champion has been competing long enough to know that he can’t look past an opponent.

After a three-round war on June 30, Rader picked up the win over Emmanuel Rivera.

“It was a good fight, an excellent fight for me to have, and I was very happy with the way it turned out,” Rader told Combat Press. “It was a good fight in the sense that I did a lot of things good, and it also showed me a lot of places where I still have work and refinement to do. I’ve been very diligently trying to refine as many of the mistakes from that last fight as I could, because, obviously, for my next fight, I need to put it together better than I ever have before.”

As he was finishing out the 15th minute, what Rader did not realize was that, immediately after, the promotion was going to offer a title bout only five weeks later. Rader was barely starting to celebrate a hard-fought victory.

“I was not prepared for it to be this quick, and it was not a decision that me and my coaches made lightly, either,” Rader explained. “I had a tough few rounds with Emmanuel, and we wanted to be sure that I was going to be as close to 100 percent going into this fight as I could be. We weighed up all of the pros and cons, and we took a hard couple days to think about it before we all made that decision together. We feel that this was best for me and my career to take this shot now, and so I’m very excited for it. I’m training very hard.”

On Friday night, at LFA 18 at the FireLake Arena in Shawnee, Okla., Rader faces incumbent champ Kevin Aguilar for the featherweight strap. While the offer came on a moment’s notice, Rader and his team came up with a game plan to get him ready on short notice.

“I took a full week off where I wasn’t really doing any live sparring,” said Rader. “It was mostly just movement and letting my body recover. Then, after that, I hit a hard week with my guys. Then, I went out to Toronto and Washington, D.C. to train with Evolucao Thai and 50/50 BJJ [respectively] as well. Now, I’m back home.”

Rader’s home camp is Lovato’s School of BJJ and MMA in Oklahoma City, where Rader is a residing instructor and Rafael Lovato Jr.’s first-ever BJJ black belt. It works out perfectly that the fight takes place only 45 minutes from his gym.

“Everything is looking very on point,” Rader said. “I’m actually a couple pounds lighter than my last fight. It’s not easy for me to get down there, so with the fights being so close, I needed the chance to recover and then get my weight back down. We felt that I could, and everything’s looking on point.”

Aguilar is arguably Rader’s biggest challenge to date. The 12-1 champ suffered his only loss over three years ago at the hands of UFC veteran Leonard Garcia. He has finished 11 opponents in his 12 wins by just about every method possible, and almost none of his victories in the last four years were over tomato cans.

“He is absolutely the toughest guy I’ve faced yet,” said Rader. “He is the most experienced guy I’ve faced yet. He’s the most seasoned and veteran, as far as fighting. I’ve been watching Kevin for a long time. He is calm and keeps his composure no matter what is happening in the fight. He’s the best striker I’ve faced and has the most power of anyone I’ve faced yet. I have a lot of respect for Kevin. He’s very formidable everywhere, and I’m going to have to put on the performance of my life to win this one.

“His reach is definitely a factor. He has a very long reach, but I believe Emmanuel’s reach was even longer than his. I know that I have a long reach disadvantage, but it’s very much what I’ve already been preparing for. I don’t expect it to be too much different.”

Rader is no slouch, either. He is, by far, the best jiu-jitsu player that Aguilar will have faced in his career, he’s durable as hell, and he has a handful of knockouts on his record. Rader is very confident that he will put on a fantastic performance, but the LFA title and future implications that come with it are not fazing him at all.

“If I start thinking about the future and what this could mean, none of that has happened yet. I don’t have the belt yet, and I’m not the champion yet. I’ve got to work hard. I’ve got to go in there, I’ve got to take it, and I’ve got to be hungry. I’m ready to fight Kevin. I know he’s ready to fight me. It’s going to be one heck of a show.”

Live on AXS TV, Rader and Aguilar will headline LFA 18 in a featherweight title showdown. If all goes as planned, Rader may get a call from the UFC before he exits the cage. For now, that is the furthest thing from his mind. The only thing he is focused on is beating Aguilar.

Rader would like to thank all of his coaches and training partners at Lovato’s School of BJJ and MMA, Evolucao Thai and 50/50 BJJ, including Rafael Lovato Jr., Mauricio “Veio” Amado, Andy Howington, Luke Tirey, Ryan Hall, Thanh Le and Vinh Le. He would also like to thank his managers, John Nash and Sam Eiser of Sporting Global, as well as his family and friends, and his sponsors: War Tribe Gear, Green Strength, PR2 Systems and Brookover Enterprises. Follow Justin on Twitter: @DarthRader86
Advertisement