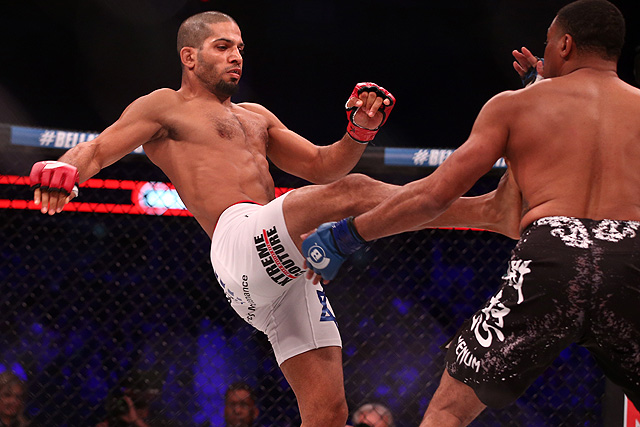 It was supposed to be a championship card. Patricio “Pitbull” Freire was set to defend his featherweight title in the Bellator 188 headliner. Instead, a knee injury forced him out of the contest and the promotion elevated fellow featherweights Noad Lahat and Jeremiah Labiano to the main-event slot. Now, Lahat, a UFC veteran and native Israeli, has a chance to make a big statement against his journeyman opponent.

Lahat entered the UFC in 2014, but suffered a loss to Godofredo Pepey in his Octagon debut. He rebounded with victories over Steven Siler and Niklas Backstrom, but then suffered a loss to Diego Rivas that led to his departure from the UFC. He landed in Bellator, where he’s topped Scott Cleve and Lloyd Carter. However, Lahat lost his most recent Bellator outing against Henry Corrales.

The 30-year-old Labiano has an 11-5 career mark, but he’s never settled in with any single promotion. Under the Bellator banner, “The Kid” has claimed victories over Alvin Cacdac and Vince Murdock, but he also suffered a loss to Josh San Diego. Labiano’s most recent victory came outside of Bellator, when he defeated Stephen Cervantes for the vacant Conquer FC featherweight title.

Can the journeyman claim his biggest victory ever, or will Lahat deliver a big win in front of his countrymen?

Meanwhile, the organization’s trip to Israel for Bellator 188 features plenty of local talent.

In addition to a preliminary-card lineup stacked with native Israelis, the main bill features Haim Gozali, an Israeli MMA pioneer who is still scrapping while well into his forties. Gozali takes on Ukrainian up-and-comer Arsen Faitovich to open the main card.

The 33-year-old Lahat is probably a bigger name to Israeli fans than fellow main-card participant and Israeli MMA pioneer Haim Gozali. That’s likely due to Lahat’s stint in the UFC, where he was able to defeat Steven Siler and Niklas Backstrom before a flying knee from Diego Rivas ended his Octagon campaign. Despite the big knockout from Rivas, Lahat exited with a 2-2 overall mark inside the UFC. He’s also accumulated six submission finishes and two knockouts of his own over the course of his 14-fight career.

Labiano has never found a permanent home among the major promotions, but this will stand as his fourth Bellator fight. He scored a win in his Bellator debut, lost his sophomore outing for the promotion, and returned to the win column in his most recent Bellator appearance. However, he’s also made stops in Pacific X-treme Combat and Conquer FC in between his Bellator fights. “The Kid” has three knockouts and four submission finishes in his pro career.

This is an opportunity for Lahat to get back to his winning ways after losing his last Bellator outing to Henry Corrales. “Neo” is 2-1 with the organization, and a move to 3-1 might even get him some consideration for bigger match-ups down the road. Bellator must already think a lot of him to move him to the top of the bill following Freire’s injury. Now, Lahat just has to deliver.

Is John Salter, who faces Jason Radcliffe in the co-headliner, poised to become a legitimate contender in Bellator’s middleweight division?

Isn’t he one already?

The UFC veteran has scored victories in all four of his Bellator appearances, and all of those victories came via stoppage. He’s in a division that features a strong champion in Rafael Carvalho and recently added Gegard Mousasi, but it’s also a division where Melvin Manhoef was able to earn a title challenge as recently as 2016 without really making a solid case for it. If Manhoef can get a title shot after essentially scoring just one victory and a no-contest, then Salter’s four finishes under the Bellator banner make him an excellent candidate.

Salter should make it five victories, too. In Radcliffe, he’s fighting a solid middleweight, but the Brit is hardly elite. In fact, Radcliffe has lost back-to-back fights. He was absolutely demolished in just 32 seconds by Oskar Piechota for the Cage Warriors middleweight crown, and he lasted until just the second round against Shane Mitchell before succumbing to strikes in a battle for the Diamondback FC belt. Radcliffe is a replacement for Salter’s original opponent, Anatoly Tokov.

Tokov would have provided Salter with a 25-2 foe who was probably on his own way to building a case for title contention. Now, Salter gets a 12-4 fighter who has lost two straight title fights. It should provide Salter with an easier path to victory. The UFC vet can add it to a list that already includes Dustin Jacoby, former Bellator middleweight champ Brandon Halsey and Kendall Grove. This win and one or two more might be enough to push Salter into a title bid.

This card takes place in Israel, and as such, it features a few locals who aren’t big Bellator stars. Native Israeli fighter Haim Gozali takes on Ukrainian welterweight Arsen Faitovich as part of the main card. Does either fighter have the talent to leave an impression on Friday night?

This is actually Gozali’s third Bellator outing. He sure has managed to fly under the radar while defeating Zane Clerk and losing to Ryan Couture. The Israeli fighter is also just 7-4 overall since debuting in 1998 — yes, really — against Carlos Newton. The Brazilian Jiu-Jitsu black belt is in his mid-40’s, too. He’s a pioneer of Israeli MMA, but his biggest contributions likely come behind the scenes as a promoter in his homeland.

Faitovich, 24, at least has age on his side. The Ukrainian is taking a huge step up in competition after competing in his native land, where he claimed four wins and suffered a knockout loss on the one occasion where he moved up to middleweight. Other than one 5-8 opponent, Faitovich has exclusively fought fighters who were making their sophomore appearance.

Faitovich is a finisher with an extremely unproven track record, whereas Gozali is at least accustomed to the big stage. On the other hand, Gozali is much older than his opponent and could find Faitovich’s youth and athleticism to be too much to handle.

Of these two men, Faitovich is the more likely to leave an impression with his actions inside the cage. If he wins in devastating fashion, then Bellator or another major promotion could show some long-term investment in the prospect. Gozali’s biggest impression might come through the emotion involved in appearing in the world’s No. 2 promotion while fighting in front of his countrymen.