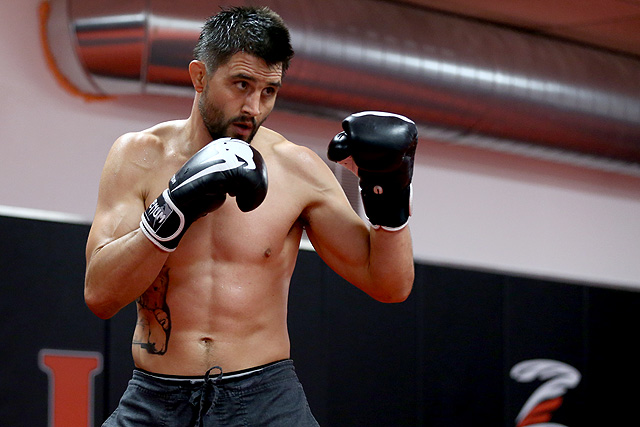 Know When to Walk Away: More Fighters Should Be Like Carlos Condit

The toughest part about the UFC on Fox 21 main event wasn’t that Carlos Condit lost, but that it could quite possibly be the last time we see the welterweight fight.

Condit didn’t exactly give Demian Maia a run for his money in the fight. The contest lasted less than two minutes before Maia did what he does best and submitted Condit. It was the second straight loss for Condit after he failed in his second bid for the undisputed welterweight crown against Robbie Lawler.

Rumors swirled that maybe Condit would retire after yet another tough war in which he took a ton of damage. Nobody would have blamed the 32-year-old if he decided to hang it up after that. After all, Condit has relied on his striking and, over time, being in striking battles tends to take its toll.

Stepping out is the best move for Condit considering the damage he has taken over the course of his career. Yes, Condit, who is only 32 years old, is still young and can compete, but the unnecessary damage isn’t something to roll the dice on. He has fought seven times in the last four years and has only two wins in that span. Of course, four of those fights did end up as “Fight of the Night” winners, though. However, with the revelations on head trauma in the past five years that only continue to pile up, it just isn’t worth it for Condit to continue down this path.

This is the second fight where Condit has brought up the possibility of stepping away. If he has to keep asking that question after each fight, maybe it’s the right time to step away and get some deserved time off. Athletes can’t be half in, half out. It’s either entirely in or entirely out. To compete with the best, there can be no self-doubt. Condit doesn’t seem to be all-in at the moment.

This doesn’t just go to Condit, either. More fighters should take the approach to retire early if they feel the same doubts about continuing to compete, or if they have taken a significant amount of damage during their fights. The health risks aren’t worth the short-lived monetary gains. The NFL is already seeing this trend with players not wanting to risk their bodies to continue to play. We’re seeing guys like D’Brickashaw Ferguson, Chris Borland and others retire at young ages to avoid the long-term problems that come with repeated blows to the head and concussions.

Condit certainly has nothing left to prove. He has been one of the top welterweights on the planet for the better part of a decade. His recent record may not show it, but he has performed admirably while fighting the best the division had to offer. He has consistently put on entertaining performances, too.

If Condit does decide to hang up the gloves, it’s for a good reason. He should be commended for taking the smart road to avoid later health problems. It’s all about knowing when to step away.