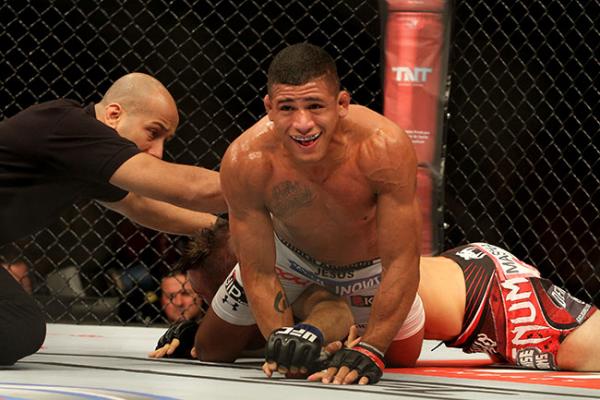 Gilbert Burns: The UFC Welterweight Everyone Should Know

Gilbert Burns is on fire, plain and simple.

The No. 6-ranked UFC welterweight has compiled an impressive five-fight winning streak that kicked off with his victory over Olivier Aubin-Mercier in August 2018. His streak also includes decision nods over Alexey Kunchenko and Gunnar Nelson. Burns most recently faced UFC veteran and former title challenger Demian Maia at UFC on ESPN+ 28. The 33-year-old made quick work of the longtime UFC standout and perennial contender by landing a crisp left hook after effectively avoiding one of Maia’s own strikes.

The 2011 Brazilian Jiu-Jitsu world champion has even managed to keep active in the grappling world while also competing for the UFC. Among his achievements on the mat, Burns closed out 2019 with three wins in a single night at Quintet Ultra. MMA fans might be more than a little familiar with his set of victims from that December event: Yves Edwards, Kazushi Sakuraba and Jake Shields.

Burns jumped up massively in the UFC welterweight rankings following his recent win over fellow grappling ace Maia. The Brazilian fighter currently right below Stephen Thompson in the UFC’s poll.

Several match-ups are on the horizon for Burns. Most recently, he was linked to fellow welterweight standout Michael Chiesa after the pair exchanged pleasantries over social media indicating they would love to square off against each other once the COVID-19 situation cools down.

Whomever Burns faces next, he has made it clear that he intends to impress fans continuously while pursuing his dream of a UFC title. At this point in his career, the Henri Hooft protege is probably one or two big wins away from earning a crack at the belt. If he was to face someone in the top three, such as Colby Covington or Leon Edwards, and win, then that’s all “Durinho” might need to warrant himself a shot at the gold.