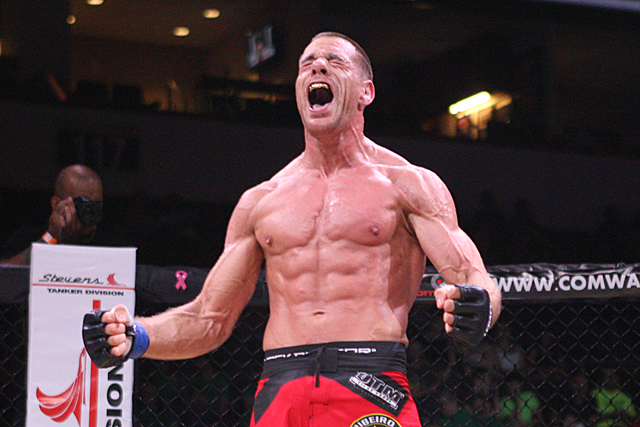 The Russian Fight Nights promotion returns to UFC Fight Pass on what promises to be a busy weekend for the UFC’s digital broadcast platform. The organization’s 45th numbered offering isn’t the deepest of lineups, but it does include UFC veteran Ivan “Batman” Jorge and features an intriguing headliner between David Khachatryan and Vener Galiev, a pair of veteran fighters who have been competing in catchweight bouts recently. This affair will be contested at a catchweight of 161 pounds.

Khachatryan is the real king of catchweight fighting. This will be the 28-year-old “Emperor’s” fourth consecutive catchweight contest and at least the fifth of his career. The Armenian fighter tends to get on a heavy roll and then stumble. He debuted in 2008 and won his first fights by stoppage before dropping a unanimous decision to Mukhamed Aushev. He won his next five outings, including four by submission, and then dropped a split verdict to Magomed Saadulaev. Next came a 13-fight winning streak that was disrupted when he lost his most recent fight via unanimous decision to Akhmet Aliev. The Armfighting Sports Club product has 10 finishes by submission and four stoppages by way of strikes. He has never been finished.

The 40-year-old Galiev has been fighting since 2004, but he has not found as much consistency as Khachatryan throughout his career. The RusFighters product has had extended winning streaks of eight and nine fights, however, and he can also claim notable victories over the likes of Alexander Shlemenko, Mairbek Taisumov and Ryan Healy. Meanwhile, he has suffered losses to Shlemenko, Beslan Isaev, Igor Araújo, Josh Shockley, Rustam Khabilov, Shamil Zavurov and even, recently, to 3-1 upstart Adil Boranbayev. “Bashkir” is a combat sambo specialist who has claimed 11 wins via strikes and three victories via submission. He holds the International Class Master of Sports rank in both combat sambo and Greco-Roman wrestling. He has been stopped via strikes on three occasions and has been submitted three times as well.

Age and his ability to avoid the stoppage would seem to favor Khachatryan, but Galiev has demonstrated his ability to play spoiler on more than one occasion. Khachatryan’s weakness seems to come when fights go the distance, and Galiev has plenty of decision wins to his credit. The older fighter will have to push his opponent for a full 15 minutes without falling victim to a TKO or landing in a submission. A few years ago, that might not have seemed like a tough task for Galiev, but his first-round knockout loss to Boranbayev calls into question the strength of his chin.

Galiev’s most recent victory came via stoppage over the aforementioned Aliev, who topped Khachatryan by way of decision. This only reinforces Galiev’s ability to play spoiler in this affair. The 40-year-old might be on the tail end of his career, but he’s still a tough opponent. Khachatryan has made a habit of victimizing mediocre competition, and he can’t claim many notable opponents on his resume. Khachatryan might look like the clear favorite at first glance, but Galiev will spoil his plans and send him home with a decision loss.

While Fight Nights, Pancrase and Shooto offerings provide a strong set of fights for the overseas crowd, Legacy Fighting Championship delivers the biggest regional offering on American shores. The lineup continues to feature mostly low-level prospects, but Legacy has some interesting fights at the top of the bill that could lead to future middleweight entrants to the UFC roster. While Andrew Todhunter seeks to maintain his unblemished mark in a featured bout against Evan Thompson, two other undefeated 185-pounders, Marcelo Nunes and Rafael Lovato, Jr., go to war for the promotion’s vacant middleweight crown in the evening’s headliner.

Lovato, despite only two pro fights, is the more recognizable name of the pair. He is an accomplished Brazilian Jiu-Jitsu practitioner who became only the second American-born athlete to win the Brazilian Nationals at the black-belt level. Despite his long list of grappling accolades, Lovato is also a skilled striker who considers his first passion to be boxing. In MMA competition, it’s the former of these skills that has led to the Oklahoma-based 32-year-old’s perfect record. He debuted in 2014 at Legacy FC 35, where he used a choke to submit Canaan Grigsby in the first round. After more than a year’s layoff, Lovato returned at Legacy FC 46 and needed even less time to choke Kevin Holland into submission.

Nunes has also been an excellent finisher over his MMA career. He debuted in 2013 with a first-round submission finish of Nate Hoffman. His next outing produced a quick knockout of Ron Imhoff, another sub-.500 fighter. His next three victories were by way of submission against only slightly more experienced and accomplished competition.

Lovato might be getting a small step up in competition here, but it’s difficult to overlook the list of victims his opponent has taken out. Other than the most recent man on the list, Miguel Rios, it’s a pretty poor group of men that includes several fighters who are more than one fight below the .500 mark. One of those opponents, Vic Hall, stands at 5-21 currently. Lovato should be able to prey on his adversary’s weaknesses, including a lack of experience against top-level competition, and find yet another submission victory.

The deepest lineup of the weekend’s regional and international offerings comes courtesy of the Japanese-based Shooto organization. Its latest Mobstyles event features notable names like Caol Uno and Yoshiro Maeda, a 125-pound title contest between Masaaki Sugawara and Hiromasa Ogikubo and the bout we’ll shine a spotlight on here: the showdown for the vacant 155-pound welterweight crown that pits Koshi Matsumoto against undefeated title hopeful Yuki Kawana.

The 32-year-old Matsumoto has more than 20 fights on his resume and has been competing since 2009. Many of his losses were packed into a stretch of fights in 2012-14 where he went just 2-4. Those four losses spanned across the Shooto, PXC and Heat promotions and included a striking stoppage at the hands of Frank Camacho and a split decision loss to Tetsuya Yamada. “Luxor” has a background in judo and has amassed seven submission victories to go along with two wins via strikes and six decision victories. He has never been submitted, but he has been stopped twice via strikes.

Kawana may be undefeated, but he isn’t perfect. The 26-year-old has fought to a draw on five separate occasions. He, too, debuted in 2009. While fighting under the Zst banner, Kawana went 4-0-4 through 2011. He didn’t compete as a pro in 2012, electing instead to work on his game while fighting as an amateur, but he returned to pro action with Vale Tudo Japan in 2013. He has notched two victories with VTJ, including a third-round stoppage of veteran Daisuke Nakamura in his most recent fight in September. He has also compiled a 4-0-1 mark while fighting in the Shooto promotion. His most notable victory in that period came at the 2013 Rookie Tournament Final, where he topped fellow undefeated prospect Akira Toritani in the tourney finals. The Shinwa Sports Academy product has five wins by way of submission and two victories via strikes.

If Kawana can claim another win over a seasoned veteran, he might just catch the eye of the UFC. The young lightweight is capable of a fast finish on the ground or in the stand-up, but he’d be well served to look for the knockout against a judo player like Matsumoto who has never been finished on the mat. This isn’t the pair’s first meeting, either. Kawana challenged Matsumoto for the latter’s Pacific Rim championship in July 2015, and their fight accounts for Kawana’s only draw since leaving Zst and retooling his game in the Shooto amateur ranks. That fight was a very close affair. Kawana rocked Matsumoto early, but the pair fell through the ropes when Kawana attempted a takedown. Matsumoto was able to recover and make it a competitive fight that left no clear victor.

These two can match each other on the feet or in the ground game, but Kawana’s early connection with a right straight that left Matsumoto rattled is an indication of what Kawana needs to do in the rematch. If he can connect again, but follow with a more aggressive attack, then he could finish his opponent. If not, then we might be in for another back-and-forth fight that ends in a razor-close decision.

Kawana seems very willing to learn from his mistakes. He even demoted himself to the amateur ranks at one point just so he could polish his game further. He’s going to up the volume of strikes in this rematch and not let opportunities escape him quite as easily. The end result will be a TKO finish for the undefeated prospect.