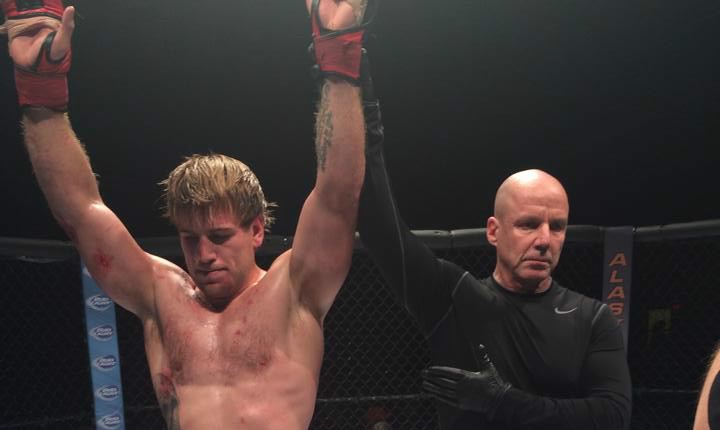 Resurrection Fighting Alliance is set to bring its style of action to St. Louis on Friday night. The main event features a pair of middleweights that look to put their name on the map. Those middleweights are John Poppie and Andrew Sanchez. The two men will go toe-to-toe for the vacant RFA middleweight title.

Here’s a brief history lesson about the RFA middleweight championship: Two of the last three men to hold the belt have moved on to fight inside the UFC’s Octagon.

This time around, Poppie knows what he needs to do to get into the UFC. He already had one shot at the big show when he was a preliminary fighter on season 19 of The Ultimate Fighter. However, Poppie came up short of making it into the TUF house. What did he learn from the experience?

Poppie has been wrestling most of his life. He feels that now is the time to get things rolling. He’s confident that he has a team that can help him to do it. Poppie spent this training camp at Chosen Few gym in Madison, Wis.

“They have a good set of coaches and I have a lot of really good training partners,” said Poppie. “Eric Stine is our striking coach. He is phenomenal. He understands the game to a very high level. He has really been a key component, as well as Kain Rizzo and Demian Decorah. They both fought, and they know the small nuances of MMA and jiu-jitsu and striking over the course of their careers that they have passed along to me.”

After spending time as a light heavyweight, Poppie has found his home in the middleweight division.

“I am having absolutely zero trouble at 185 pounds,” he said. “I have a good dietician who helped me out with my diet. I have a ton of energy and I am eating plenty of foods still, so this weight cut has been super easy.”

Both Poppie and Sanchez come from a wrestling background, but Poppie thinks that Sanchez has no idea what is in store for him on Friday night.

“I think it will be because he will have to be wary of my takedowns as well has just the basic wrestling that I have that will either nullify his or take his over,” Poppie explained. “I think that it will be a good test for him as well as for me, that he is a high-level wrestler just like I am. I do believe that I have better wrestling than him and it has translated into MMA a lot better. I think I will have the upper hand when it comes to wrestling this time around.

“I have really good cardio and I like to push the pace. I think that it will give me an advantage in the fight.”

Poppie has been looking for a five-round title affair, and now he has his wish.

“I am pretty excited,” he admitted. “I have been looking for a fight for a while. I was just lucky enough to have this fight fall in my lap. I just can’t wait for the weight cut to be over and to be fighting Andrew for the middleweight title.

“I really enjoy five-round fights. I think that they are fun. We get to find out who wants it more when we get to rounds three, four and five — especially for wrestlers that wrestled in college. In college wrestling, you wrestle for an awful seven minutes. But after seven to nine minutes, you are done.”

As a former collegiate wrestler, Poppie has some advice for the next generation and USA wrestling as a whole.

“I think you are always going to have guys that excel in whatever sport that they do,” he said. “As for where American wrestling needs to go, they need to transfer over more into freestyle. Get more into freestyle, even at a young age. Keep the folk-style base, but they need to start freestyle in high schools and middle schools so that we can be more competitive at the Olympic level and international level.”

Poppie has already made one run at The Ultimate Fighter. Would he consider doing it again?

“I would, but I would prefer skipping it,” he admitted. “But if the opportunity came through, I would go try out again.”

He might not need to consider that option. If he defeats Sanchez on Friday night, he’ll capture the RFA middleweight crown. And that could be all Poppie needs to punch his ticket to the big show.

“I see myself taking the belt to Wisconsin and making Andrew question if he wants to keep fighting or not.”