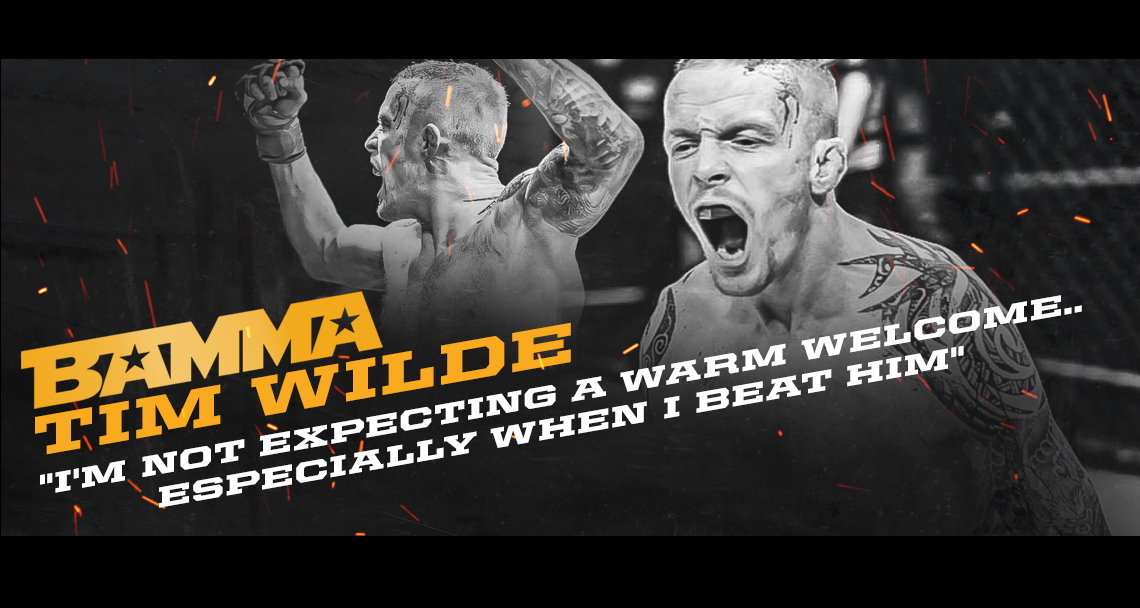 Tim Wilde’s hair is red, but as the referee stepped in to separate him from his opponent, it had turned a dark crimson. In fact, Wilde was covered in various shades of red. It wasn’t his own blood. It was the blood of his adversary, Jefferson George, who had sustained a cut over his left eye. Seconds later, the camera focused in on the cut as the doctor spread it open. It was gory. It was deep, too. So deep that the contest was over. Wilde had another win on his resume.

That TKO win came over 19 months ago at BAMMA 14. It was Wilde’s second victory with the prominent British promotion and his third win overall. It would turn out to be his last fight under the BAMMA banner for quite some time, though. Wilde ventured to other promotions for his next four outings. He picked up three wins, including a notable decision victory over Damien Brown. In between the wins, he also suffered his first professional loss, a second-round submission finish at the hands of Sean Carter.

“Coming off my loss at the end of last year, I had a terrible injury that took a lot of time to heal, but I’m 100 percent now and looking to stay active,” Wilde said.

Now, Wilde is set to make his return to the BAMMA cage. By the time he crosses the threshold for his upcoming fight, it will have been 21 months since his last BAMMA appearance. His absence may have knocked him a rung or two down the ladder in the promotion’s lightweight title picture.

“The lightweight division is the most stacked division in the world, in my opinion,” said Wilde. “There are some interesting fighters in my division. I just want to fight and beat them all.”

“I think he is a good all-rounder and very tough,” Wilde said of his upcoming opponent. “It looks like he has strong takedown defense and a very good top game.

“He won’t be easy to put away, as he has a very good chin. I don’t think he is very good off his back and he isn’t very creative; I’d say those are his weaknesses.”

Of Wilde’s opponents, only the aforementioned Brown and Carter feature better resumes than Mulpeter. The Irish fighter also has the benefit of training out of SBG Ireland, which serves as home to Conor McGregor, Cathal Pendred and Aisling Daly. The event’s setting at 3 Arena in Dublin could also work against Wilde.

“I would love for [the crowd] to recognize we are just both warriors battling it out,” Wilde said. “But I saw him fight on another show in Dublin last year and the crowd love[d] him, so I’m not expecting a warm welcome. Especially when I beat him.”

There’s no denying Wilde’s confidence. The 28-year-old Englishman has plenty of reason to believe in his ability to win the fight. He has finished three opponents with strikes, one via submission and earned another two victories on the scorecards. He’s fighting an opponent from a famed camp, but he has a solid team behind him as well.

“I will be working with the circle I always work with,” Wilde said. “They know me and know how I work. I have all the right people in it [that] I need to make me fight ready — big shout out to my team, UTC Staffs.”

Wilde’s eyes are set on BAMMA’s lightweight title picture. Lonsdale champ Marc Diakiese is set to defend his belt on the same card when he meets fellow undefeated fighter Rick Selvarajah, and the lineup also features 155-pound contenders Jack McGann and Jack Grant, as well as prospect Kane Mousah. It’s a crowded field, and it should help Wilde with his goal to stay active.

“I would like to get two more fights in this year after this one,” Wilde added.

If Wilde can stay active and keep winning, it might not be long before he’s wearing something other than a shade of crimson. That new color might just be gold.