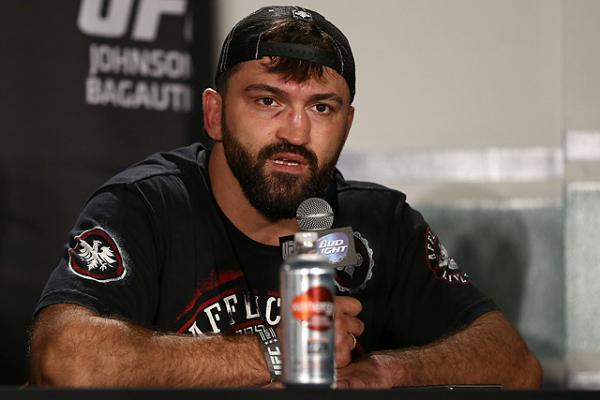 “I think it’s time he delivers a flying knee.”

On May 15, 2010, in the co-main event of Strikeforce’s “Heavy Artillery” show, commentator Mauro Ranallo said this in response to fellow commentator Gus Johnson, who was asking what former UFC heavyweight champion Andrei Arlovski should do after being completely outclassed by Antonio “Bigfoot” Silva in the first round of their fight. This was, of course, a joke made in reference to Arlovski’s infamous flying knee attempt against Fedor Emelianenko which resulted in Arlovski being brutally knocked out mid-air by Emelianenko and collapsing like a corpse to the canvas. The tone that the Strikeforce commentary team struck when discussing Arlovski spoke volumes of how the MMA world at large viewed the Belarusian at that point.

Nary a second went by in that fight without the commentary team disparaging Arlovski’s lack of tolerance for strikes to the jaw, and Silva clearly dominated all three rounds to earn a unanimous decision win. Arlovski actually chalked it up as something of a moral victory to put the aforementioned bad-chin talk somewhat to rest, taking some vicious shots from the incredibly strong acromegaly-afflicted Silva that would’ve taken out most heavyweights, and yet Arlovski persevered.

Following the Silva loss and a subsequent knockout loss to Sergei Kharitonov, Arlovski was released from Strikeforce and embarked on a tour of the minor-league promotions, from the short-lived ProElite to ONE FC to the World Series of Fighting, victorious in every fight except his soccer-kick knockout of Tim Sylvia which was ruled a no-contest, the legality of which was slightly ambiguous due to ONE FC’s rules, and his unanimous decision loss to white-hot light heavyweight prospect Anthony “Rumble” Johnson, in which some inaccurate timekeeping may have led to Arlovski’s jaw being broken well after a round should have otherwise ended.

“The Pitbull’s” post-Strikeforce record grew to 6-1-1, which was impressive enough in today’s talent-hungry UFC to get the call from matchmaker Joe Silva that every fighter hopes for. The opponent chosen for Arlovski’s reintroduction to the Octagon was yet another heavyweight with a reputation for a brittle chin, Brendan Schaub, with the newly christened nickname of “Big Brown.” The jokes would write themselves across the intertubes referencing double knockouts and things of the sort, and when the fight happened, it failed to meet even the lowest of expectations and resulted in UFC President Dana White proclaiming that “the fans lost in that fight” in response to Schaub’s vehement opposition to the decision being awarded in Arlovski’s favor.

Needless to say, Arlovski’s UFC return was lukewarm at best, and while it was considered to be a win and will be seen as such by those simply reading articles mentioning said win without any context, it was a very tepid performance and Arlovski owned up to that fact in the UFC 174 post-fight press conference, saying, “When I stepped inside the Octagon, my hands, my legs shook for some reason. I was just nervous more than the first time when I fought 14 years ago almost. Next time I promise I’m going to do much better.”

Shortly after that tepid affair, the UFC had announced that Arlovski and Bigfoot would be headlining a Fight Night card in Brasilia, in a rematch of the ridiculously one-sided aforementioned 2010 fight. It was yet another Arlovski UFC fight booking that had the MMA blogosphere shaking their collective heads. After all, their first fight was about as definitive as it can get without a stoppage, Silva’s decision win over Mark Hunt was overturned due to elevated testosterone levels as a result of his UFC-approved testosterone replacement therapy (TRT) gone awry, and Arlovski’s fight with Schaub was god-awful.

When Silva was widely considered to be the favorite in this fight, the oddsmakers and MMA media at large, including myself, failed to address the elephant in the room: TRT. Silva’s history with testosterone boosting, augmentation, replacement or whatever else you want to call it, goes all the way back to February 2007, when he was suspended after his win over Justin Eilers in EliteXC. Silva tested positive for Boldenone, an anabolic steroid. His situation is a unique one, however, in that his acromegaly is responsible for lowering his level of testosterone to a dangerously low level, and per Alex Davis, Silva’s manager, he was using Novodex, which is a testosterone booster in order to get back up to an acceptable range. Davis was quoted as saying, “He spends between $6,000 and $8,000 a month just on medicine for it. He needs to be able to keep fighting to make a living. If it’s between Antonio’s health and pleasing the athletic commission, we have to choose his health.”

That failed test was over seven years ago now, and one could surmise that until the introduction of random testing, that Silva and his team had still been “choosing his health” up until his failed test in the Hunt fight, albeit with better timed care, so to speak. Of course, when the UFC began to hand out TRT exemptions semi-liberally to fighters who were competing in unsanctioned areas, it must have seemed like the perfect opportunity to make Silva’s therapy legitimate and put it on the books. The writing was on the wall at that point regarding random testing, and Silva, in fact, was tested randomly for UFC 146, the same day that Alistair Overeem was caught with an unacceptable testosterone-to-epitestosterone ratio which forced him out of a title fight against Junior dos Santos. Silva passed that drug test, allowing him to offer his then-intact face and a large percentage of his blood supply as sacrifice to then-contender Cain Velasquez.

Now that TRT is banned, and drug testing is much more sophisticated, Silva can’t risk the use of any kind of testosterone booster and actually will be undergoing surgery to remove a cyst on his pituitary gland (which has been at fault for his testosterone deficiency) a few days from now. The logical conclusion to all of this is that Silva was most likely sorely lacking in testosterone for this recent fight with Arlovski, at least in comparison to his previous bout with the Belarusian. This would explain the god-awful performance put on by Silva while Arlovski was able to stay on the outside and pick Bigfoot apart before finally laying him out, a stark contrast to the Silva who relentlessly threw bombs at Arlovski and kept him pressured against the fence while repeatedly going for takedowns. UFC commentators Jon Anik and Kenny Florian didn’t feel the need to make any quips about Arlovski’s chin or suggest that he do a flying knee, either.

To a person looking at stats without context, they could say that Arlovski’s two wins in the UFC make him a legitimate contender in the heavyweight division. If one was to look deeper, it was an abysmal split-decision victory over Schaub in an embarrassing performance, and a win over a possibly testosterone-deficient version of Antonio “Bigfoot” Silva, who really didn’t do much of anything inside the Octagon. All in all, Arlovski’s current 2-0 run in the UFC comes with some glaring caveats. It’s also quite possible that he ends up getting matched next with another inconsistent guy who was taken off TRT recently, perhaps Ben Rothwell.

Arlovski could very well be the revitalized contender that the Zuffa promotional machine will probably try convincing us he is. But from his current UFC stint, we really don’t know as much about this 2014 version of him as some may think.