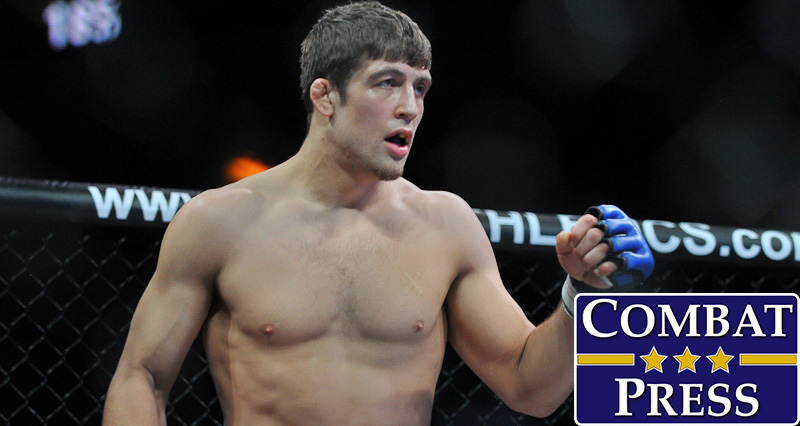 There are a lot of people in the world that still believe that mixed martial arts is a sport filled with Neanderthals who go into the cage or ring to beat the life out of their opponent. But if you happen to look at the landscape of mixed martial arts, a very high percentage of fighters graduated from college, and not just with a university studies degree either.

Resurrection Fighting Alliance fighter Andrew Sanchez’s passion for music has always been there. He is a self-proclaimed “band geek.” But if I were you, I wouldn’t call him that to his face.

“I started in junior high playing the clarinet in the band,” Sanchez told Combat Press. “I guess you can say I was a bit of a band nerd. Then I got to high school and realized that clarinet was not for me, so I moved on to piano. After playing piano for a bit, again I realized it was not for me. Then I started play guitar and I have been playing guitar ever since.”

For a short period in time, while training in St. Louis, Sanchez started a band with a few other guys who were training with him. The band was made up exclusively of fighters. However, the project has since dissolved due to training and camp moves that are necessary in this sport to advance one’s skills.

In the case of Sanchez, the move took him to New Jersey to train with a team called K Dojo.

“K Dojo has some of the best Russian fighters in the world training there. They are tough. They are mean. They make great training partners,” Sanchez explained. “The Russians have a unique style. They have their own way of fighting. It’s cool to see that. You don’t get to see that every day. It is an interesting view and perspective. I just don’t train with them; I live with them. It has definitely helped my game, training with these guys.”

For the last few years, Sanchez has been a guy that the experts feel can make the jump to the big shows. In his last fight, the result was not what he was hoping for — he lost by knockout.

“It was a long and frustrating year. I really took my time to heal my head after being knocked out. That is not something that you mess with,” Sanchez said. “I want to have a long career. I don’t want to lose my chin. I don’t want to be slurring my words when I am older. So I took a long time. Took the time for everything to recover. Then I started to get the itch to compete again. It has been so long, I almost forgot what it felt like to compete.”

But don’t think for one second that Sanchez has just been sitting around at home doing nothing.

“I have been improving for a whole year straight,” he said. “I have not been sitting on my ass. So I am definitely the best Andrew Sanchez. I can’t wait. I feel that I am peaking at the right time.”

Tonight, at RFA 26, Sanchez fights Clinton Williams. He readily admits that he does not know very much about his opponent.

“A fight is a fight,” Sanchez said. “I am not going to sit here and say this guy is a stepping stone. I am just going to run through this guy.

“He only has a couple fights online. I do believe this is a step up in competition for him. I feel very confident in the fight. I feel that I am going to win. I would not call it a warm-up fight by any means. I want to go in there and get the win and get back into the swing of things.”

Sanchez knows that this is just the beginning of bigger things to come. He bared witness to the ultra-fast rise of his good friend and former training partner Jake Collier. Collier was able to capture the RFA middleweight title and the UFC came knocking on his door before long.

“He came in and, boom, won the RFA title, and now he is fighting for the UFC. That is why I choose RFA. I know what it brings,” said Sanchez. “I definitely feel that I am ready, skill-wise. I feel that I have paid my dues in RFA. I got caught by a guy that I feel that I should not have lost to. It’s up to RFA, but I feel that I am 100 percent ready.”

Sanchez’s frustration levels have not all been due to injury. Opponent changes have plagued him for a few months.

“I have been waiting a long time for opponents,” he said. “Guys have been backing out left and right. Everyone out of Denver backed out, so [the RFA] had to look elsewhere. I think I am ready. I feel that I deserve it.

“It is really frustrating. There is enough stress as it is, getting ready for a fight. The thing is, all these guys would say yes. All of them said yes. Then I would be like, ‘OK, great, I am set.’ Then they would back out. Every single one backed out. It is a bit taxing, mentally, but it is not something I am not use to. It has happened in the past. It use to frustrate me, but I am a bit older now and I know, no matter what, I just have to be ready.”

Win or lose, Sanchez knows one thing. He will be in New Orleans to cheer on his good friend Collier at UFC Fight Night 68.

“I have to stay focused on my fight. But right after that, I am going to go down there and be with him. If I were so happen to lose this fight, it would be a rough day going down to Louisiana. But I really don’t plan on that. I plan on getting the job done and having a really good day after the fight.”