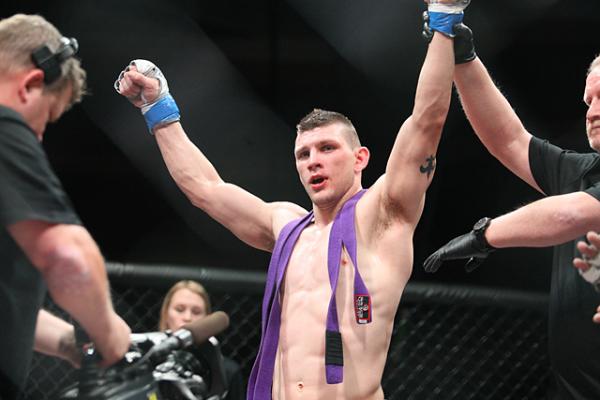 On Friday, March 20, Titan FC hosted its 33rd event from the Aeroplex at Brookley in Mobile, Ala.

In the night’s main event, the promotion’s featherweight champion, Desmond Green, looked to defend his 145-pound title against former UFC fighter Kurt Holobaugh. Green captured the belt in December with a decision win over Steven Siler. Holobaugh, meanwhile, had scored back-to-back wins under the Titan banner. He edged Eric Marriott on the scorecards before demolishing Lloyd Woodard in just 15 seconds last August.

The 11-fight event kicked off with one un-aired preliminary card bout. Six additional prelims streamed live on CBSSports.com at 8:30 p.m. ET, with the four-fight main card airing live on the CBS Sports Network at 11 p.m. ET.

The co-main event was for the Titan FC heavyweight title, as Jon Madsen took on Chase Gormley. Gormley started the round with a few leg kicks, but Madsen was able to land few bombs that hurt Gormley. Gormley recovered quickly and attempted a double-leg takedown. Madsen scrambled out and got back into striking distance, where he remained for the rest of the round. In round two, both fighters looked to pick their shots. Twenty seconds in, Madsen was able to land an over-the-top right hand that hurt Gormley. Halfway through the round, Gormley found his range and landed a few heavy leg kicks. In the third frame, Madsen looked for a couple of takedowns, with Gormley stuffing the second attempt. Gormley landed some solid ground-and-pound after the stuffed takedown. The pace slowed in round four. Gormley tried for a body throw, but Madsen rolled out. Madsen landed some heavy hands and looked for the finish. The referee stepped in for the doctor to look at a cut on Gormley’s right eye. Action restarted and Gormley was able to get a takedown. Round five was more of the same, as both men looked to finish the fight. With 10 seconds left, Madsen hunted for a takedown. The fight ended up in the judges’ hands, and Gormley was awarded the heavyweight title by unanimous decision.

The first of three title fights pitted UFC veteran Pat Healy against Kurt Kinser for the lightweight title. In the first 30 seconds of the round, Kinser was able to secure a headlock takedown. With some control, Kinser almost pulled off a half-crucifix straight armbar. Kinser finished the round with two more takedowns. Rinse and repeat in the second frame, where Kinser controlled most of the round. With under two minutes to go, Healy was able to get a takedown and secure back control to ride out the round. The third stanza featured more of the Kinser control game, but round four was a reverse of the previous periods, with Healy controlling and trying to find submissions in the first half of the frame. It was not until there was a minute and a half left that Kinser was able to reverse Healy and get into top control. In round five, Healy finally took control and landed a takedown early. From there, he secured back control and landed some hammer fists. Healy also attempted a few rear-naked choke submissions that did not go far. The fight went to the judges for a decision, and Healy eked out the split verdict.

Kicking off the televised card, Bellator and World Series of Fighting veteran Cody Bollinger took on undefeated prospect Andre Harrison. Harrison bullied his way to land three takedowns in the first frame. Although Bollinger was able to stand up on the first two, Harrison maintained top control for most of the round. In round two, Bollinger attempted a couple of submissions from the bottom, but the story of the round was Harrison’s top control. Harrison accumulated over two and a half minutes in top position. In the third frame, Bollinger secured a takedown. However, as with the first two stanzas, Harrison was able to dictate the round and secure two more takedowns. It was enough to allow Harrison to secure the unanimous decision victory.