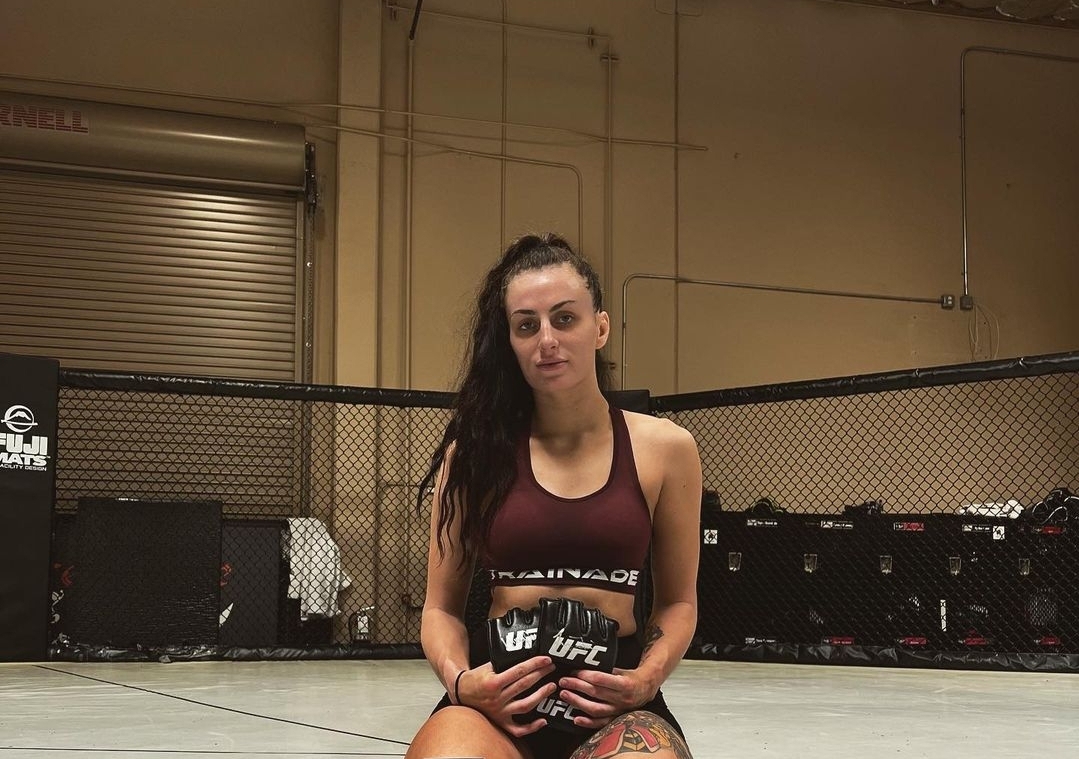 Will Casey O’Neill Emerge as a Threat to Shevchenko’s Throne?

Casey O’Neill faces Roxanne Modafferi in the prelims of UFC 271 this Saturday, Feb. 12. O’Neill has been impressive in the UFC so far, winning all three of her outings by stoppage. Will she continue her rise and emerge as a contender to Valentina Shevchenko’s flyweight throne?

Shevchenko won the second title fight in the division’s history in Nov. 2018 to become champion, and she has gone on to defend her belt on six occasions. The Kyrgyzstani fighter has captivated fans with her wide repertoire of strikes and strong grappling skills. She has arguably become the most complete fighter in the UFC and has seemingly no glaring weaknesses in her game. Such has been the extent of her dominance, fans were surprised when she was taken down and out-grappled by Jennifer Maia in the fourth round of their fight in Nov. 2020. This was in spite of the fact that the champ had dominated the contest up to that point. She would proceed to win that one by unanimous decision.

The lack of competition that Shevchenko faces at flyweight has led many fans to believe that she will return to bantamweight to attempt to win that title, which she has challenged for once already. The extent of her dominance is reflected by the fact that she has defeated all four of the top ranked flyweights. However, there has recently been an influx of talented flyweight fighters into the UFC who could become credible threats to her throne.

O’Neill has arguably emerged as the most impressive prospect of all. Not only has she been victorious in her three fights in the UFC, she has been able to secure finishes in all of those bouts. In her debut against Shana Dobson, she quickly attempted a takedown. The 24-year-old had to withstand some big shots from Dobson before eventually getting her down. From this point O’Neill landed a barrage of strikes which overwhelmed Dobson. O’Neill got a takedown immediately at the start of the second frame and delivered a sustained attack on the ground. The referee called a stop to the fight, three minutes and 42 seconds into the second round. O’Neill displayed grit and durability to walk through the big shots she took early on.

O’Neill was given a tougher test in her second fight in the Octagon which was against Lara Procopio. Early on, Procopio was able to neutralize O’Neill’s ground game, and she landed a takedown of her own. The Scottish-Australian fighter overcame the slow start and started to take control. She wore Procopio down and secured a rear-naked choke submission victory in the third round. Procopio is a black belt in Brazilian jiu-jitsu, therefore getting a submission win was impressive for O’Neill.

O’Neill then took on Valentina Shevchenko’s older sister Antonina. The Kyrgyzstani fighter was initially able to thwart O’Neill’s takedown attempts and got the better of the striking exchanges. However, O’Neill was persistent and managed to get Shevchenko down. O’Neill dominated the rest of the round and landed some big shots in the closing moments. She was able to get a takedown early in the second and proceeded to land a barrage of ground and pound shots. O’Neill secured the TKO victory at 4:47 of the second frame. She was relentless with her takedowns attempts and was ruthless when she did manage to ground Shevchenko.

O’Neill’s wrestling prowess will be key if she fights Valentina Shevchenko. The champion has had a grappling advantage over nearly every fighter she has come up against. This has been a big part of her success, as she has been able to dictate the range at which her fights play out.

The aforementioned Maia was able to briefly trouble Shevchenko on the ground. This shows that the 33-year-old could have a potential weakness that could be exploited by an elite grappler. However, this was a rare moment of vulnerability in what has otherwise been an almost flawless title reign.

In her UFC career thus far, O’Neill has displayed the type of aggression and tenacity on the ground that Shevchenko has been associated with. While there are still technical flaws in her grappling that will need to be eradicated, it is encouraging that she already possesses some of the intangibles that are needed to become champion. O’Neill has also demonstrated durability on the feet. This is not something that she will want to rely on, but is still a useful trait to have, particularly when she faces higher-level competition.

Roxanne Modafferi will test O’Neill in the grappling realm at UFC 271 this weekend, and it will be intriguing to see how the Scottish-born fighter fares in this area. O’Neill’s defensive wrestling has been solid thus far, but she has not faced anyone with the credentials of Modafferi. The 39-year-old is renowned for her durability, as she has only been finished four times in 44 professional contests. As a result, if O’Neill is able to finish Modafferi on the ground, the division will inevitably take notice of her ability in this department.

Another factor that could make O’Neill a credible threat to Shevchenko is that she has already accrued significant martial arts experience. Shevchenko is a lifelong martial artist, and her mother was a multiple-time Muay Thai champion. The Kyrgyzstan native made her professional MMA debut at the tender age of 15. Women’s MMA is still relatively new, and, for this reason, some of Shevchenko’s opponents did not step foot into martial arts at a young age, unlike her. Often, it appears that these fighters are not able to bridge this gap between themselves and the champion. Lauren Murphy did not have any martial arts experience until she was 26, while Katlyn Chookagian made her professional debut at 25. Experience does not equate to ability and isn’t the sole reason for Shevchenko’s dominance, but her experience advantage over most female fighters is substantial. This is evident in her fights, where she simply seems to have an endless number of tools in both striking and grappling against opponents who specialize in one area.

O’Neill began her martial arts journey at the age of four and had her first amateur MMA fight at 15. Her father Cam is a former kickboxer and currently runs his own MMA promotion in Australia, Eternal MMA. O’Neill is part of a new generation of women’s flyweights who got involved in martial arts at a young age and were able to quickly rise up the ranks once they turned professional. This includes the likes of Erin Blanchfield, Maycee Barber and Miranda Maverick. These fighters are perhaps equipped with the skills to test Shevchenko, unlike many of the older athletes in the weight class.

Despite just being eight fights into her career, O’Neill already has five-round experience. She secured two title victories in Eternal MMA in bouts that went the distance. This will stand her in good stead if she earns a UFC title shot.

Despite all this, it must be remembered that O’Neill is still in the early stages of her career. She can be reckless at times with her striking and is not as defensively secure in this area as she would need to be to challenge for a title. However, there have noticeably been incremental improvements in this department in each of her UFC bouts. O’Neill is in the right environment to improve. The 24-year-old trains out of the Xtreme Couture Gym in Las Vegas, Nevada. This is widely regarded as one of the elite gyms in MMA today and is where UFC heavyweight champ Francis Ngannou trains.

Seeing Julianna Peña deliver arguably the greatest upset in MMA history against Amanda Nunes will perhaps instill belief in many flyweights that they, too, could dethrone a seemingly invincible champion in Shevchenko.

Casey O’Neill has talked about wanting to progress at a steady pace. However, considering Shevchenko has cleaned out most of the division, O’Neill could get her shot sooner rather than later.