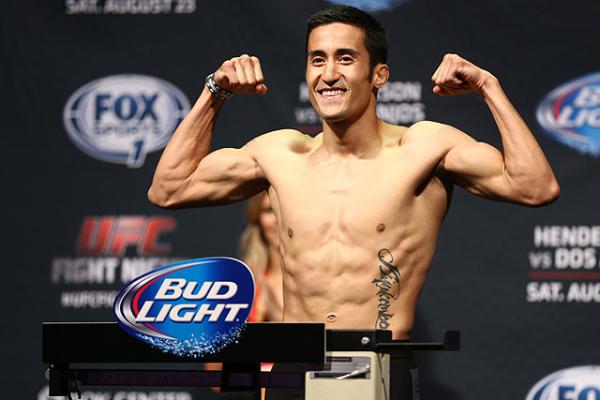 On Monday, Nov. 10, the Boston Herald announced a match-up between flyweights Tateki Matsuda and Joby Sanchez who will square off at UFC Fight Night 59 on Jan. 18, 2015 in Boston.

Matsuda is a Japanese native who moved to America in 2004 to attend Salem State University. Matsuda was called up from the New England regional MMA scene as a late replacement to face Chris Beal at UFC Fight Night 50 on Sept. 5. That night Beal bested Matsuda by unanimous decision. Prior to the loss, Matsuda was riding a two-fight winning streak.

Sanchez, who trains out the famed Jackson-Winklejohn in Albuquerque, N.M., is also coming off a loss in his UFC debut. Sanchez was also a late replacement, and faced Wilson Reis at UFC Fight Night 49 in Tulsa, Okla., on Aug. 23. Sanchez was able to rock Reis in the first round of the contest but was not able to finish the fight. Reis was able to recover and cruise to a unanimous decision win. Before the loss to Reis, Sanchez was a perfect 6-0 to start his pro career with all of his wins coming by way of TKO or submission.

UFC Fight Night 59 takes place at the TD Garden Arena on Jan. 18. The card is scheduled to be headlined by Irish featherweight Conor McGregor as he takes on German striker Dennis Siver. The night’s main card will be televised on Fox Sports 1.