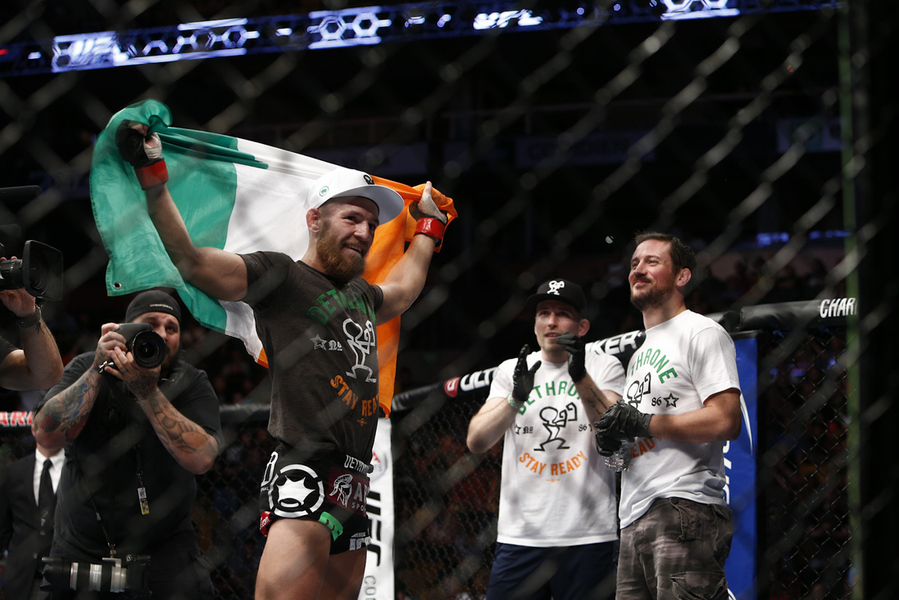 These were the three previous Ultimate Fighting Championship main events on free television that the promotion decided to advertise through its special partnership with the Fox television network via special placement in the network’s National Football League playoff broadcasts, which are some of the most watched events of American television out of the entire year.

One of the UFC’s main goals for its events on free television is presumably to pull in new viewers, something the ad spots during said NFL games should be uniquely suited for, and then convert a substantial portion of these new viewers into pay-per-view buyers.

Evans/Davis was considered to be a No. 1 contender fight, with the winner facing light heavyweight champion Jon Jones later that year. It was a largely forgettable fight, as most Davis fights predictably are, and it couldn’t possibly have made the viewers excited to see the winner in his title fight with Jones later in the year, even if it was a grudge match of sorts. Since this was the first full UFC card on Fox after its very successful broadcast debut featuring the Cain Velasquez vs. Junior dos Santos heavyweight championship fight a few months prior, it pulled in the second-highest rating of the Fox years up until recently, which could be attributed to the novelty of the UFC being on network television at the time and the inertia from the previous heavyweight championship show. It could be argued that the event’s lack of entertaining action contributed to the dramatic ratings drop for the subsequent show on Fox featuring Nate Diaz and Jim Miller, which was the second-lowest rating the promotion has ever pulled in on the network.

The UFC seemed to have shifted its strategy for booking its Fox network shows not too long after that ratings disaster, making six of its next seven main events on the network championship fights featuring either then-lightweight champ Benson Henderson or flyweight kingpin Demetrious Johnson, both of whom were seen as poor pay-per-view draws (although Johnson wouldn’t prove this until UFC 174 in 2014). It almost appeared as if the UFC was using Fox shows to offload the championship fights the company couldn’t get people to pay for, and this would not help the UFC in terms of ratings at all, as the Johnson/Henderson combo led the promotion’s Fox ratings on a steady decline throughout their tenure on the network, to the point where it could be argued that the inertia from this destructive programming kept the downward trend going when the UFC started booking some other main-event fighters that would have far more compelling match-ups.

For this year’s NFL conference championship weekend, the UFC decided to schedule a Fight Night show on the Fox Sports 1 cable channel on the same Sunday as the games and time it in a way where the main event would begin right as the AFC championship game wrapped up. The main Fox network was broadcasting the NFC championship game earlier in the day between the Green Bay Packers and Seattle Seahawks in what turned out to be one of the most exciting playoff football games of all time, with Seattle playing some of the worst football of their entire season before coming back later to take the lead at the very end. While an incredibly large portion of the country had their eyes glued to their TV screens witnessing this dramatic game unfolding before them, it was interspersed by commentators Joe Buck and Troy Aikman reading canned promotional lines not unlike the ones we MMA fans are accustomed to hearing from UFC commentator Mike Goldberg, suggesting that featherweight Conor McGregor is the “Irish Muhammad Ali” while Aikman was audibly struggling to heap praise on McGregor, saying, “I’ll tell ya, I watched him in… some of those fights… and… [laughs]… man… he’s the real deal.” Later on during the game, in what seemed to be every other break in action, viewers were greeted by McGregor himself instructing them to tune into Fox Sports 1 after watching the later AFC game to see him (paraphrasing) “beat up an angry German.”

The adventurous football fans who took McGregor up on that offer witnessed him do just that, and in a very impressive fashion. Make no mistake, this match-up was clearly booked in the hopes that it would be a showcase fight for the Irishman, and he delivered in spades. He made the legit-but-declining Dennis Siver look like an amateur that didn’t even belong in the UFC, let alone fighting a top-10 featherweight. It was an even more spectacular performance than Donald Cerrone’s destruction of Siver at UFC 137. Viewers were then treated to some entertaining theatrics when McGregor leaped out of the Octagon to confront his next rival and reigning champion of the featherweight division, Jose Aldo, only to be restrained by two burly bodyguard-type people in suits who just so happened to be in precisely the right place at the right time.

I’m fully aware of how anecdotal this is, but I had a fair amount of people — people who don’t normally watch MMA — on my personal Facebook and Twitter feeds talking about the fight they had seen, some of whom mentioned interest in seeing McGregor’s next fight against Aldo, which is currently targeted for the UFC’s “International Fight Week” card on Memorial Day Weekend in Las Vegas. This was probably the first time in years that I had personally seen a substantial amount of new MMA viewers giving the sport a chance.

This is what the UFC needs to strive for with its free shows, and it is probably the first time the promotion has pulled it off properly since the aforementioned Velasquez/dos Santos fight in 2011. The McGregor vs. Siver fight peaked at 3.162 million viewers according to Nielsen overnight ratings, making it the most watched MMA event ever on the Fox Sports 1 cable channel. Here’s hoping this wasn’t a fluke, and that the UFC is finally learning how to better utilize the multitude of assets at its disposal with this Fox deal it has, both for the UFC as a business and for us as fans.