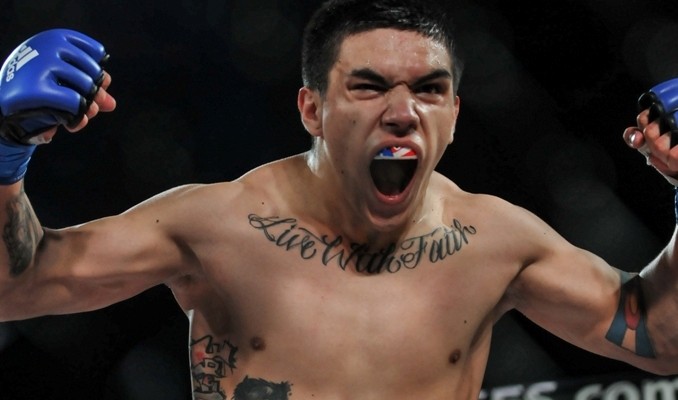 The world of mixed martial arts was forever changed back in 1993 when the UFC held its first event, UFC 1, in Denver. There, such fighters as Royce Gracie and Ken Shamrock competed in a tournament unlike anything the world had seen. It only seems fitting that Joe Guerrero was born that same year and would eventually come to train out of the very site where MMA was reborn.

Guerrero was born to be a competitor. Starting at the ripe old age of four, he took up wrestling and continued all the way through high school under the guidance of his father and coach.

“My dad has been a big part of my life,” Guerrero told Combat Press. “He’s been there for me since I was four years old. He was my coach and he started me off. Then as I grew and started getting older, of course, he couldn’t teach me because he wasn’t the coach for the middle school or the high school. He was so wild. Technically, he was my coach, because I could hear him over my coaches and he would get as close to the mat during the tournaments.

“The coach would be yelling something and I couldn’t hear it, and he knew I couldn’t hear it. I hear him, seconds later, yelling something and I’m in the heat of the match and he’s yelling something, and I was like,‘Oh, okay, there it is.’ And my coach is like, ‘I told you to hit this move,’ and I was like, ‘I didn’t even hear you say that. I heard my dad say it.’ Ever since that one match, the coach said, ‘We’re going to keep your dad as close to the mat as possible. If you can’t hear us, you can hear him and we will tell him what to say.’

In November 2013, Guerrero decided it was time for him to transition from wrestling to the amateur fighting circuit. He was matched up with Joe Espinoza, who was also making his amateur debut at Resurrection Fighting Alliance 11. After three hard-fought rounds, Guerrero ended up on the wrong end of a unanimous decision.

“Losing that first fight was a big eye-opener for me because, I mean, I lost a lot in my wrestling career,” Guerrero told Combat Press. “My dad always told me that if you aren’t losing, you aren’t getting better. So I kind of took that over from my senior year, because I finally made it to the state tournament. I carried that mentality over like, ‘I’m always better than I have ever given myself credit for.’

“So I went into that fight thinking all I have to do is keep that same mentality and I can win. And I lost because it wasn’t so much the cockiness, but I wasn’t understanding the sport as much as I do now. It’s a lot different from wrestling, but it’s a lot like wrestling as well. That loss definitely showed me a lot and taught me the hard work still needs to be put in and the mentality needs to be boosted even more.”

The words of Guerrero’s father perfectly sum up the mentality he brings into every fight.

It seems Guerrero truly took his experience and made the most of it. He has won three bouts since that first setback and looks to make it a fourth this coming Friday at RFA 20 in Broomfield, Colo.

There is something different about this particular fight for Guerrero: He is not entirely sure who he is fighting.

“I honestly don’t know the guy’s name,” Guerrero chuckled. “My coach told me, ‘Hey, we have a fight,’ and I was like, ‘Okay.’ He said he was 2-3 or 3-2, and then just last week he called me and said we have a different opponent for you and this guy is 5-3. I asked him what his name was and he couldn’t remember at the time. Ever since then, I haven’t really asked. I don’t really care who it is. The guy could be Anderson Silva, and he made a mistake leaving whatever card he was supposed to fight on and fight me.”

It may sound crazy, but it makes sense. How many times have fighters focused so much on their opponent that they forgot that fighters change and evolve? With his coaching staff and unusual mentality, Guerrero feels he has the upper hand.

He also believes that his newfound life experience can be beneficial for those in the town where he currently resides.

“I’ve always wanted to be a role model in the neighborhood I live in,” Guerrero revealed. “When I’m running down the street, it’s like the scene from Rocky where the kids are running after him—they’re running with me. I’ve kind of always wanted to have that—to keep the area nice and to have something to look forward to. Never think that you can’t make it to the top of the world. It doesn’t mean you can’t climb that ladder. All you have to do is put in that hard work. Noticing that one of my dreams is very accomplishable, just the little things I set goals for are starting to come into play.”

Guerrero’s words resound down to the deepest depths of our human core. It’s interesting that what many people see as such a barbaric sport contested between Neanderthals can really house some of the most prolific and enlightening individuals.