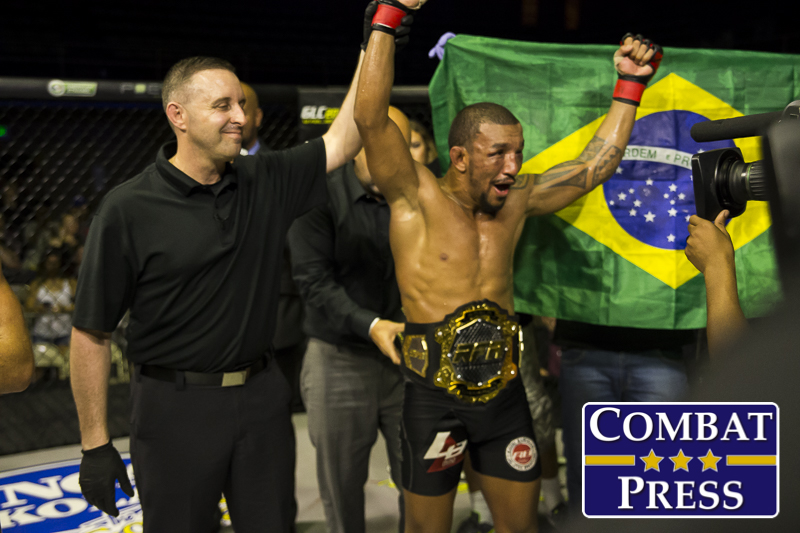 Many of the best flyweight champions in the world are tied up in the current season of the UFC’s The Ultimate Fighter tournament. However, there are a few worthy up-and-comers who missed out on their chance for an immediate title bid against UFC kingpin Demetrious Johnson. Case in point: Pietro Menga. The undefeated fighter will instead headline the 18th offering from ICE FC. He draws Brazilian Carlos Eduardo de Azevedo as his opponent in a flyweight title showdown.

The 28-year-old Menga is a British fighter who has been competing professionally since 2011. He has already made one appearance under the Bellator banner. The “Pitbull” impressed with a 41-second knockout of Spencer Hewitt, but the quick win wasn’t enough to land him an exclusive deal with the American promotion or with any other major organization. Instead, he resumes his campaign on the regional circuit. Menga has put together a solid resume that includes victories over formerly undefeated Rany Saadeh for the UCC flyweight crown, prospect Sotir Kichukov for the Full Contact Contender flyweight strap and two victories over 40-plus fight veteran Steve McCombe. Menga’s only taste of defeat came in a submission loss while on the amateur circuit with the OMMAc promotion. The BAMMA veteran has submitted eight of his pro opponents and three of his amateur foes. He has also scored three stoppages via strikes in his professional career.

Menga’s Brazilian nemesis, de Azevedo, pales in comparison. The Peposo Team export has managed to claw his way to a record of just one win below the .500 mark through 11 pro fights. Unlike many of his fellow countrymen who has competed exclusively in South America, de Azevedo has actually never fought professionally in his homeland. He resides in Spain, where he made his pro debut in a losing effort. He’s appeared on cards in Italy, Russia, Portugal and China, in addition to Spain. This will be his first appearance in England. His mediocre record features a three-fight winning streak and a loss to 20-plus fight vet Marc Gomez Sariol. He has gone the distance in seven of his fights. He has one striking stoppage victory and on submission win. He has been finished twice via strikes.

Menga is the heavy favorite in this affair against a well-traveled, but inconsistent opponent. Menga’s submission game is probably more than de Azevedo has ever encountered before. Furthermore, Menga’s striking will be sufficient to punish the questionable chin of his Brazilian counterpart. Menga should make quick work of de Azevedo, likely hastening his return to American airwaves with either Bellator or another interested major promotion.

It’s no secret that the Resurrection Fighting Alliance has the market cornered when it comes to the task of serving as a developmental league for future UFC talent. The promotion, set to host its 45th event, is even poised to merge with its only true rival, Legacy FC, next year. In one of its last remaining standalone ventures before next year’s merger, the RFA will features two championship showdowns. Gerald Meerschaert and Chase Waldon collide in the headlining light heavyweight title fight, but it’s the second featherweight title defense for reigning champ Raoni Barcelos that serves as the most intriguing contest on the docket. Barcelos puts his crown on the line against Dan Moret in the show’s co-headliner.

Barcelos, 31, debuted in 2012 and stacked up victory upon victory through his first seven outings. He stopped all but two of those foes, and he was forced to settle for a decision nod in his RFA debut against UFC and WEC alum Tyler Toner. Following his fight against Toner, Barcelos suffered his first defeat when he was submitted by Mark Dickman at RFA 14. He responded by defeating Jamal Parks to earn a crack at RFA gold. Barcelos decisioned Ricky Musgrave to capture the featherweight belt and then defended it against Bobby Moffett. The former Shooto Brazil featherweight champion has compiled five wins via strikes and one victory by way of submission. The breakdown of his finishes can be misleading, though. He has trained in Brazilian Jiu-Jitsu since a very early age under his father, Laerte Barcelos, and holds the rank of black belt.

His challenger, the 29-year-old Moret, has compiled an impressive mark of his own since debuting in 2012. “The Hitman” stopped his first three opponents and four of his first six overall before stumbling against Luke Sanders at RFA 13. Moret rebounded with a submission of Jordan Griffin, but he then suffered a loss to the aforementioned Moffett. The Minnesota Martial Arts Academy disciple has won his last four fights, including two by way of submission. Overall, he has six submission wins and just one TKO finish. Moret has a background in high school wrestling.

Barcelos has a dangerous jiu-jitsu base and strong takedowns, but he can be lethal on his feet as well. He has dismantled opponents with everything from short jabs to flying knees. João Herdy Jr., Erinaldo Rodrigues and the aforementioned Parks can all testify to the ferocity of the Brazilian’s attack. The only time Barcelos lost, he struggled against the wrestling of his opponent. The Brazilian’s well-rounded game gives him a number of routes to victory in any fight.

Moret’s one plus skill in this fight is his wrestling, but he’s facing a dangerous opponent. He needs to duplicate the aforementioned Dickman’s strategy in order to frustrate Barcelos en route to a submission finish. Moret is good at finishing opponents on the mat, but Barcelos is a step or three above the likes of Damien Hill, Jose Pacheco, the aforementioned Griffin, Jay Ellis and Mike Plazola. Moret was able to find chokes against all of these previous victims, but Barcelos won’t be as accommodating. Moret is going to have to work much harder to get a finish here, but it’s not out of the question.

Barcelos has to be frustrated that he’s still toiling around in the RFA despite a title victory and successful defense. Why has the UFC not come calling? Well, it may be a combination of factors, including the Brazilian’s loss to Dickman and his inability to finish Musgrave or Moffett. The BJJ black belt needs an impressive showing against Moret, but this may be just as hard to come by. Barcelos is more likely to grind out another decision nod, which could leave him stuck with yet another title defense after this one.

Seventeen fights. Seventeen victories. It’s an eye-opening record that should be turning some heads, including those of major promotion bigwigs like UFC President Dana White. However, Ukrainian prospect Yaroslav Amosov is going to have to add at least one more win to his resume before the big show comes calling. The Tech-Krep welterweight champion gets his chance this weekend at the promotion’s Prime Selection 2016 Finals event. The show, which includes at least four tournament finals to go along with two title bouts, features Amosov in a title defense against Salim Touahri.

Amosov is just 23 years old, which makes his 17-fight run all the more impressive. The “Dynamo” kicked things off in 2012 with the first of nine straight stoppage victories. He didn’t go the distance until his 10th fight, his Tech-Krep debut against Oleg Olenyechev. He added another streak of six straight finishes after taking the nod over Olenyechev. His most recent affair, however, ended in a split verdict against Roberto Soldic for the Tech-Krep welterweight title. Overall, the Germes and Combat Dobro fighter has eight finishes via strikes and seven submission victories. He has a combat sambo base and has won a Ukrainian combat sambo championship, but his skills are still very raw in the MMA realm. He’s aggressive and hangs in there even when he’s getting hit, though, which makes him a tough opponent for any man.

Touahri fights out of Poland, where he started his career in 2010. “Grizzly” won his first five bouts, including four by way of stoppage. He then fell in a quick 28 seconds during a PLMMA welterweight title bid against Paweł Żelazowski. The 27-year-old has returned to the win column for his subsequent four outings, including another three finishes, but he has struggled to find fights. He’s had fights nixed for everything from various injuries to a supposed request for Touahri to throw a fight in Serbia. The Polish fighter will be competing outside of his native land for the first time in his career.

These fighters both have a lot of quick first-round finishes to their name. Don’t blink during this one. While Touahri has a strong record, he’s mostly dispatched of inexperienced, mediocre competition outside of his most recent win over Matt Inman, who entered the contest with a mark that stood at 17-7. It could be argued that Amosov also lacks heavy credibility due to his time on the Ukrainian regional circuit, but the combat sambo specialist can at least boast victories over established veteran Diego Gonzalez and the formerly 6-1 Soldic.

A quick finish from Touahri is certainly a valid possibility in this fight, but Amosov is the favorite in this affair. He has a more well-rounded game and the aggression to get things done. These guys will likely stand toe-to-toe and throw down until someone drops. That someone is more likely to be Touahri than Amosov.