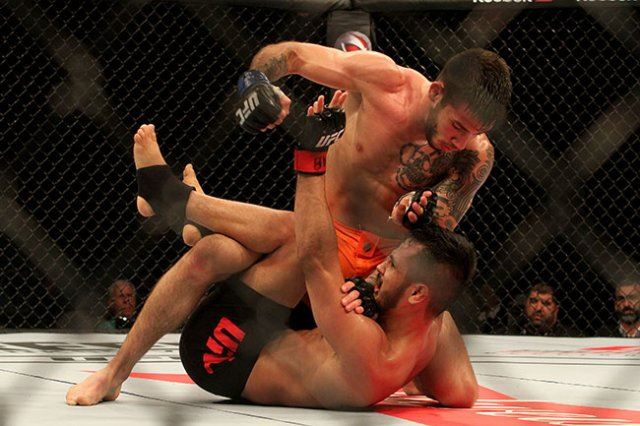 The UFC has mined the M-1 roster for talent this year, but the Russian organization keeps finding new fighters to fill the void. Take Roman Bogatov. The promotion’s lightweight champion claimed the title in the second half of 2018 and made a successful defense to kick off his 2019 campaign. Now, Bogatov, who is still perfect through nine pro fights, puts his belt on the line against veteran challenger Mickael Lebout in the headlining contest of M-1 Challenge 104.

Bogatov’s pro career kicked off in 2016 with a win over a sub-.500 opponent, but most of his adversaries have sported solid records. He has handed two pro fighters their first career losses, and he also scored decisions against veterans Jani Salmi, Raul Tutarauli and Rubenilton Pereira. The latter of those victories netted the Fighter Gym product the M-1 strap. Bogatov went on to defend the crown in January with a submission finish of Michel Silva. The Russian is a skilled grappler who has registered five victories by way of submission. His first fight with a major promotion came under the Fight Nights Global banner, where he handed out the first pro loss to Artur Zainukov. The remainder of his fights have come for M-1, beginning with first-round submissions of Aleksey Sotnikov and Rico Franco.

Lebout is a French fighter who trains with MMA Factory, which has also served as home to UFC fighters Francis Ngannou and Cyril Gane After a 13-3-2 run that included wins over the formerly undefeated Damien Lapilus, Albert Odzimkowski and Paweł Żelazowski, the 32-year-old landed on the UFC roster in 2015. He didn’t find much success, though. The Frenchman lost his Octagon debut to Sergio Moraes and won just one of his remaining two outings with the promotion. After a loss to Stevie Ray, Lebout continued his skid with two additional defeats outside the UFC. His struggles continued with just two wins in his next four fights. “Ragnar” finally found his footing with M-1 in 2018. He has won three of his four fights with the Russian promotion, which was good enough to secure a title shot. Lebout has eight submissions and one TKO victory.

Bogatov has found success through a combination of relentless takedowns and constantly improving striking. He’s also been tested by both strikers and grapplers. The Russian is unlikely to score a knockout — he’s yet to do it in an MMA setting — but he’s a lethal threat once the fight hits the canvas. Even if he can’t find a finish, Bogatov has the ability to outwork his opponent en route to a judges’ nod.

Lebout’s resume might lead one to believe that he relies heavily on wrestling and grappling, but he’s perfectly happy to stand with opponents and doesn’t shoot for many takedowns. His work on the ground is more the product of an opportunistic streak than a focused takedown attack. The French fighter might spend a lot of time on his back against a wrestler with Bogatov’s abilities.

We’ve yet to see the reigning champ fall victim to a submission or a knockout. Lebout isn’t exactly a predator on his feet, and his grappling savvy is likely to be neutralized by the Russian. Bogatov’s tendency is to finish any fighter who has more knockouts than submissions on their resume. If a fighter has a more submission-heavy record, Bogatov tends to win on the scorecards. If this fight plays into that pattern, we’re looking at a decision victory in Bogatov’s favor.

Out of this weekend’s regional and international shows, the 25th edition of Brave Combat Federation features easily the most stacked lineup. The top fight on the bill is a lightweight title showdown between Luan Santiago and Cleiton Silva, but former UFC flyweight Matheus Nicolau catches our attention for his bantamweight scrap with Felipe Efrain.

The UFC has become increasingly content to let good fighters walk away, either via a release or through free agency. Nicolau, 26, may not be the biggest departure, but he’s a significant one. The Nova União export came up through season four of The Ultimate Fighter: Brazil, where he defeated two of his three bantamweight opponents. After submitting Bruno Mesquita in his official Octagon debut, Nicolau shifted to the flyweight division and edged former title challenger John Moraga on the scorecards. The Brazilian added a victory over Louis Smolka. His last UFC appearance ended in a knockout loss to perennial top-15 fighter Dustin Ortiz. Nicolau, who debuted in 2010 and had only suffered one loss prior to his UFC tenure, landed back on the regional circuit, where he submitted Alan Gabriel in his lone post-UFC bout to date.

The 25-year-old Efrain doesn’t have any UFC fights on his resume, but he has made brief stops with both Titan Fighting Championship and the Rizin Fighting Federation. Unfortunately, he has very little to show for it. He challenged UFC veteran Tim Elliott for the Titan flyweight strap, but he was submitted in the second round. His Rizin appearance was a mixed bag — he won his fight by knockout, but it went down on his record as a no-contest after he missed weight. Efrain, who made his pro debut in 2013, became a mainstay under the Brave CF banner in 2017. His first two fights, including one against UFC castoff Walel Watson, ended in finishes. However, Efrain has now lost two of his last three fights.

Nicolau has been in the cage with some top-notch competition. He outworked Moraga and Smolka, which is no small feat. The Brazilian has a well-rounded game and significant experience at a level far above Efrain. His biggest weakness is probably his chin, which has caused him to lose two fights by knockout. However, he’s going to be in the fight regardless of whether it stays on the feet or goes to the ground. Nicolau is better suited for the flyweight division, but he’s fared relatively well at 135 pounds too.

Efrain’s recent struggles are a huge red flag. The Chute Boxe disciple was stopped by Frans Mlambo, an unheralded 4-2 fighter, and he dropped a decision to prospect Stephen Loman. If Efrain can’t get past those fighters, it’s difficult to see him emerging as the superior fighter when he meets Nicolau.

Nicolau was a breakout candidate before the UFC lost interest in the flyweight division. He can’t be faulted too much for the loss to Ortiz, who is a tough fight for all but the very best at 125 pounds. Nicolau has to rebuild his resume at bantamweight, and he’ll continue on that quest with a submission of Efrain.

The women’s featherweight division is perhaps the most shallow weight class in all of MMA. Even at the UFC level, it often seemed like Cristiane “Cyborg” Justino had to settle for title defenses against bantamweights who had moved up a class. Even the woman who finally beat her, Amanda Nunes, has had some reservations about continuing to fight in the division. That’s what makes a fight like the Standout Fighting Tournament 15 affair between Jamila Sandora and Mayana Souza so important. The women’s featherweight division needs more talent, and the winner of this contest could contribute to that cause.

Paraná Vale Tudo’s Sandora has fought at 145 pounds on a few occasions during her amateur and pro career. However, she, like many other featherweight ladies, has also dabbled in bantamweight competition. She lost her lone amateur bout via submission while at featherweight, but she’s rebounded nicely as a pro with five victories and no defeats. She finished her first two opponents, but she’s gone the distance in her three most recent bouts.

The 33-year-old Souza was an undefeated prospect until her 2018 appearance on Dana White’s Tuesday Night Contender Series, where she fell victim to a ninja choke in just 62 seconds at the hands of Mayra Bueno Silva. “Kellen” has otherwise been a solid fighter, but most of her action has come in the bantamweight division.

In the shallower waters of the featherweight division, one of these ladies could make an impact. Sandora’s time could be running out — she’s listed as a 37-year-old — but she might have a late breakout up her sleeve. Souza is closer to her prime, and she’s already caught the attention of the UFC. The move up in weight could give her an easier route to the big show, too.

This should be a war, but Souza will pick up the hard-fought decision.