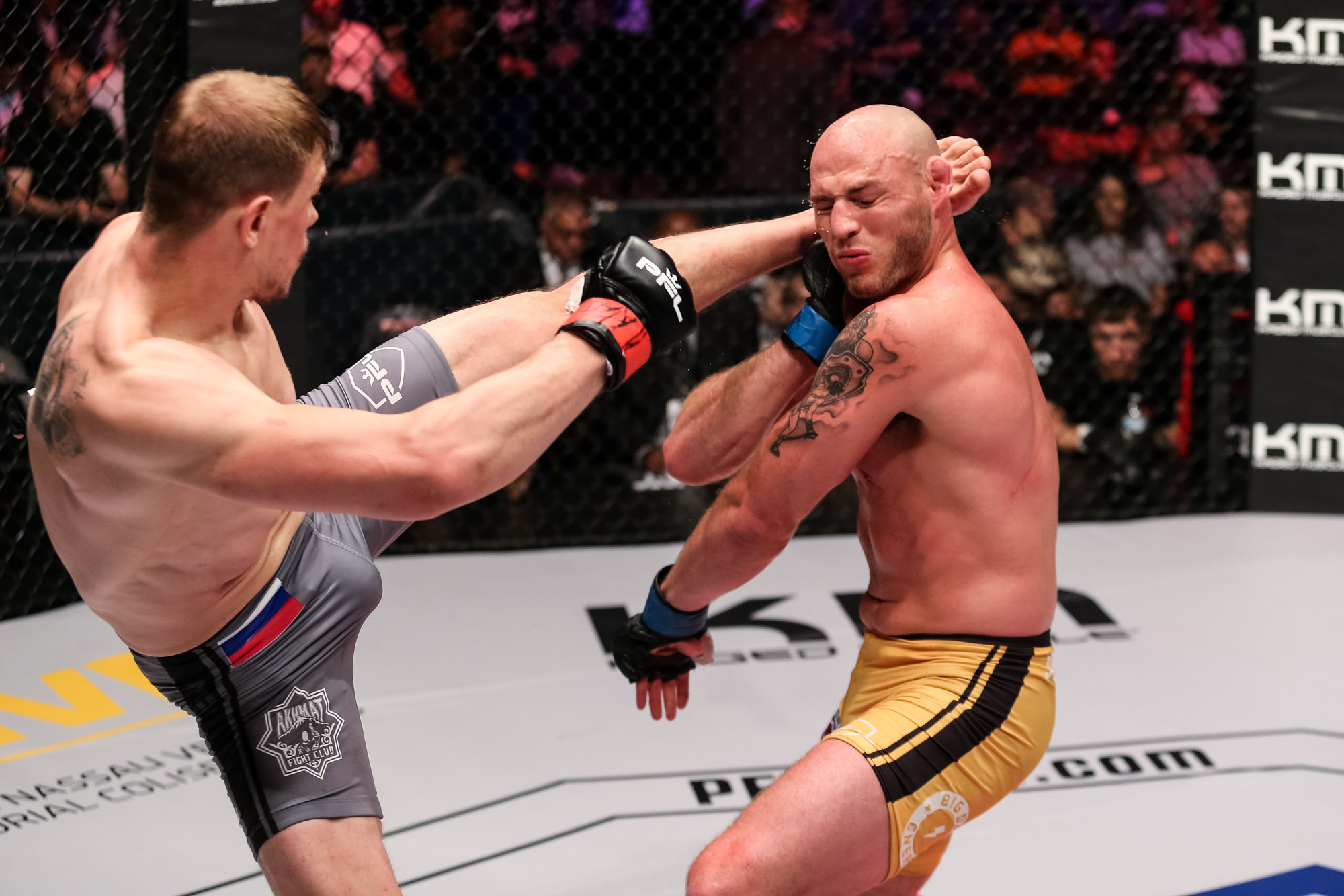 October’s postseason continues. In Major League Baseball, we’re down to the Washington Nationals and Houston Astros. In the Professional Fighters League, it’s time to whittle down the heavyweight and light heavyweight divisions.

The heavyweight field also includes four returning fighters, but none of them advanced beyond the semifinals last season. Jared Rosholt and Alex Nicholson found the most success in 2018, but Francimar Barroso and Kelvin Tiller also qualified for the postseason. This quartet will be joined by first-timers Denis Goltsov, Satoshi Ishii, Muhammed De’Reese and Ali Isaev.

These are the last two divisions in need of finalists for the PFL’s year-end spectacular. Again, the Mandalay Bay Events Center in Las Vegas plays host to the festivities. The action goes down on Thursday night, with the first six fights airing live on ESPN+ at 5 p.m. ET. The remaining six contests can be seen on ESPN2 at 8 p.m. ET.

Each week so far during the playoffs, there has been one dark horse who has marched to the finals. Two weeks ago, it was David Michaud. Last week, it was Daniel Pineda. Who’s the most likely man to pull off a similar run this week?

The breakout nights from Michaud and Pineda were definite surprises. Neither man had demonstrated consistency in their respective careers that would have suggested they could conquer a one-night gauntlet and land in the finals, but both fighters did exactly that. Can a light heavyweight or heavyweight follow in their footsteps? Definitely.

The most likely candidate is heavyweight Alex Nicholson. The 29-year-old “Spartan” has been through a series of ups and downs since debuting in 2014. He holds a modest 14-8 mark, and he’s only won two of his last five fights. He advanced as far as the semifinals last season. He also experienced a disappointing 1-3 stretch with the UFC a few years ago.

His route to the finals is similar to that of Pineda, who was able to finish two opponents in stunning fashion to advance. Nicholson isn’t likely to find a choke like Pineda did against Jeremy Kennedy, but he has heavy hands. Nicholson has 12 career knockouts, but he’s also suffered four knockout losses. He’s a do-or-die warrior who could crack a couple skulls and land in the finals.

Denis Goltsov has impressed thus far in the PFL 2019 season. Does his success carry over to the postseason?

The towering Russian is the No. 1 seed, and for good reason. He steamrolled the competition during the regular season. First, he scored a first-round finish of Jared Rosholt. Then, Kelvin Tiller was his victim in a third-round submission stoppage.

The 29-year-old has five losses on his resume, but four of those defeats came very early in his career. He’s 19-1 over his last 20 outings, and he’s faced some strong competition in this span. Goltsov is an equal-opportunity finisher, with 10 knockouts and 10 submissions to his name.

The “Russian Bogatyr” draws Satoshi Ishii in the quarterfinals. The Olympic gold-medalist judoka was surging when he entered the 2019 PFL season, but he looked flat in his two regular-season contests. He only managed a split verdict over Zeke Tuinei-Wily, an inexperienced fighter with just four previous bouts. His second fight went even worse, resulting in a unanimous-decision loss to the aforementioned Rosholt.

Goltsov, a world champion in combat sambo, is far more dynamic than Rosholt and far more seasoned than Tuinei-Wily. He should be able to neutralize Ishii and either get the knockout finish or earn the win on the scorecards.

His next task will come in the form of the winner of the quarterfinal affair between Tiller and Ali Isaev. Goltsov has already handed Tiller one loss, and a repeat performance would be likely in that scenario. Isaev is a strong wrestler, though, and he could eliminate Tiller to advance opposite Goltsov. In this case, Goltsov is in for a tougher fight. He’ll have to keep Isaev from getting takedowns and working top position. Isaev has demonstrated great positional control and dominance in his PFL outings, but he’s also never met someone of Goltsov’s caliber.

Isaev is likely to have his way with Tiller, and the showdown with Goltsov might be the most intriguing fight of the evening. Both men can strike, but they also have solid ground games. As good as Isaev might be, Goltsov gets the slight nod here.

Who else advances to the heavyweight finals?

The other side of the heavyweight bracket could produce the dark horse Nicholson, but he’ll have to get through Francimar Barroso first. The 39-year-old Brazilian is a UFC veteran who found mixed results as a light heavyweight inside the Octagon. Barroso has fared much better as a heavyweight, collecting five wins and one draw since departing the UFC. “Bodão” did take a split verdict over Nicholson in June, and he could take another win here as long as he doesn’t get caught and dropped. The Nova União product has suffered three career knockout defeats, though, so his chin could be out there for the taking.

The other match-up on this side of the bracket features Jared Rosholt, a grinding wrestler, against Muhammed De’Reese, a banger who has pummeled numerous opponents en route to an 8-1 mark. Rosholt, a UFC veteran, doesn’t have the best stand-up, and that has cost him dearly in several fights, including Octagon appearances against Aleksei Oleinik, Roy Nelson and Caio Alencar. The Team Takedown fighter only excels when he can drag the fight to the canvas and work his top control. De’Reese did wrestle in high school and college, but he’s nowhere near the standout that Rosholt was in his own collegiate days. Still, De’Reese might be able to compensate with his power.

The semis could get interesting. If it’s Nicholson and Rosholt, then it’s a matter of whether Nicholson can keep from ending up on his back. If he can, he likely finds a knockout. If he can’t, then Rosholt wet-blankets him en route to a decision. Barroso, meanwhile, would make like a little more difficult for Rosholt on the ground. The Brazilian is a skilled grappler who could take advantage of a mistake by Rosholt and find the tap. De’Reese, on the other hand, would be a wild card against Nicholson or Barroso. His power could bring a quick end to either man, but he could just as easily suffer a loss to Nicholson on the feet or Barroso via submission.

Ultimately, Barroso’s overall game and Rosholt’s smothering wrestling put them in line for a semifinal match-up. The Brazilian is likely to take advantage of the holes in Rosholt’s game to advance to the finals. It’s really just a battle to be Denis Goltsov’s next victim, though.

Will Jordan Johnson finally rediscover his groove in the light-heavyweight playoffs?

Johnson appeared to be the crown jewel of this tournament when he defected from the UFC and joined the PFL as an undefeated fighter. Unfortunately, things didn’t go as planned and Johnson faltered on his way to a decision loss to Maxim Grishin. He did bounce back with a victory over Sigi Pesaleli, but that’s hardly a big accomplishment.

Now, Johnson gets a chance at redemption against Grishin in the quarterfinals. In their initial meeting, the NCAA Division I All-American wrestler was stymied in his quest for takedowns. Grishin demonstrated excellent takedown defense, and he often scored points on the separation with combinations and kicks.

Johnson needs to tune up his wrestling game some more if he wants a different result in the pair’s rematch. Grishin combines crisp striking with an excellent defense and counter game. If Johnson gets repeatedly stuffed and hit, then we’re looking at a simple repeat of the first fight.

Grishin is a ridiculous 17-1-1 in his last 19 fights, so Johnson definitely has his work cut out for him. The Russian obliterated Mikhail Mokhnatkin in his other regular-season affair, and he also holds notable victories over Rakim Cleveland, Trevor Prangley and Rodney Wallace. Grishin is actually a sneaky favorite in this field, and he could provide Johnson with another setback.

Who else advances to the light-heavyweight finals?

The winner of the rematch between Jordan Johnson and Maxim Grishin will then have to contend with either Vinny Magalhães or Rashid Yusupov. A Magalhães fight is about as unpredictable as they come, as the Brazilian can look like an ace at times and flat at others. The 27-year-old Yusupov would seemingly make for an easier fight for either Johnson or Grishin. In this mix, Grishin should emerge as a finalist.

On the other side of the bracket, Bozigit Ataev meets Viktor Nemkov and Emiliano Sordi tangles with Sigi Pesaleli. Sordi, who finished both Magalhães and Ataev during the regular season, should coast past the 1-2 Pesaleli. The 40-year-old Ataev will have his hands full with Nemkov, who trains out of the same camp that has long housed Fedor Emelianenko.

A trilogy fight between Sordi and Ataev is an attractive proposition, but there’s no guarantee that it happens. Ataev is getting up there in years, and his recent results leave a lot to be desired. Nemkov is no world-beater, but he wins far more than he loses and will enjoy a four-inch reach over his upcoming foe. Nemkov has topped the likes of Ronny Markes, Attila Vegh, Stephan Puetz, Maro Perak and Gadzhimurad Antigulov. While he has had the occasional stumble, he’s a solid fighter who should find a win over Ataev.

From there, Nemkov would have to deal with Sordi, who has looked very good this season. Sordi finished Magalhães early in the season and then added a first-round stoppage of Ataev. Nemkov will be another huge challenge for Sordi, but he could benefit from an easy first fight while Nemkov could be pushed harder by Ataev. Still, Sordi’s resume doesn’t suggest he’ll have what it takes to get past Nemkov.