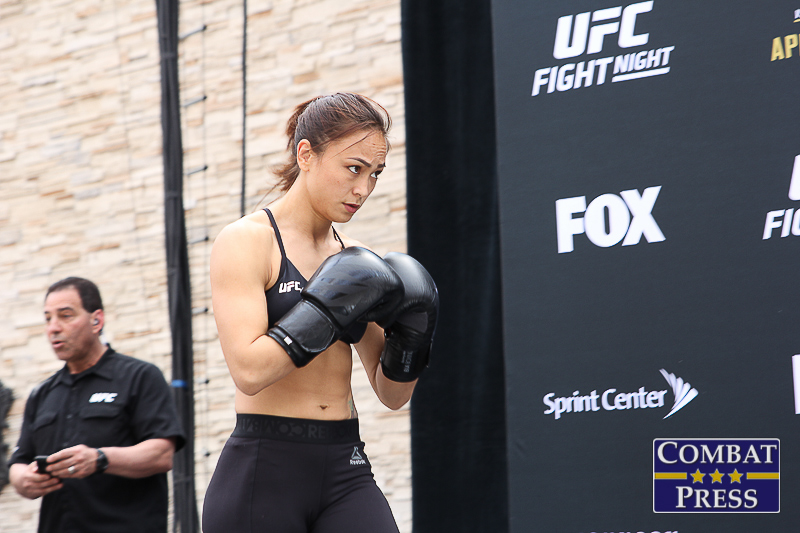 Former strawweight queen Joanna Jędrzejczyk makes the short three and a half hour drive west from American Top Team in Coconut Creek, Fla., to Tampa for her main event showdown with Colorado-born, New-Mexico trained Michelle Waterson at UFC on ESPN+ 19.

Waterson is riding a three-fight winning streak and looking to parlay a victory over the former champion into a title shot as she tries to become the first woman to have given birth to a child and then gone on to become a UFC champion.

After dropping back-to-back fights to Rose Namajunas, Jędrzejczyk picked up a win over Tecia Torres before moving up to flyweight and dropping a title contest against Valentina Shevchenko. The bellicose Polish striking phenom will look to start her journey back to strawweight gold with a win over Waterson.

Standout submission-grappling specialist Kron Gracie puts his undefeated record on the line against veteran contender Cub Swanson in the evening’s co-headliner. Swanson has taken on nearly every big name at featherweight throughout his WEC and UFC tenure. He’s looking to not only hand Gracie his first defeat, but also snap a four-fight skid of his own and right the ship for one last run before his career comes to a close. This will be Gracie’s sophomore appearance in the UFC after submitting Alex Cacares in the first round of his UFC debut. This bout is very much a crossroads fight for Swanson — if Gracie comes away victorious, then it would be a passing of the torch and a major statement that Gracie is a true contender at 145 pounds.

Further down the main card, we will see the return of world-champion submission grappler Mackenzie Dern, who takes on Amanda Ribas in a strawweight bout. This marks the first time Dern will be back in the Octagon in over a year and the first time she fights since becoming a mother. Ribas returned from a three-year hiatus at UFC on ESPN 3 a few months ago and picked up a win over Emily Whitmire in her UFC debut. This fight between budding contenders could mark the beginning of a title run for the victor.

UFC on ESPN+ 19 takes place at the Amalie Arena in Tampa and airs exclusively on the worldwide leader’s streaming platform. Preliminary action gets underway at 5 p.m. ET, followed at 8 p.m. ET by the main card. Combat Press writers Chris Huntemann and Matt Petela preview the action in this edition of Toe-to-Toe.

Joanna Jędrzejczyk has lost three of her last four fights, but all of those defeats came in title bouts. The Polish star has never lost a non-title affair. Will she extend this streak when she meets Michelle Waterson in Florida?

Huntemann: Wow, this fight kind of snuck up on us, eh? I remember thinking this was a great match-up when it was first announced. I just didn’t realize it was happening this weekend. Time sure flies, doesn’t it?

Jędrzejczyk’s recent slump was due more to ego and hubris than anything else. She didn’t forget how to fight, but she truly believed she was unbeatable — then she met Rose Namajunas. Jędrzejczyk didn’t take Namajunas seriously before their first meeting at UFC 217, and when Namajunas won with a shocking first-round knockout, Jędrzejczyk recommitted herself. By that point, Namajunas was just the better fighter and won their rematch a few months later.

Jędrzejczyk was also probably competing a little too heavy in weight against Valentina Shevchenko. The Jędrzejczyk we saw against Tecia Torres is more in line with the fighter we have come to expect. Jędrzejczyk’s striking was crisp and high in volume, as always, and she looked refocused.

Waterson has also improved as a fighter and is probably neck-and-neck with Tatiana Suarez right now as the top contender at strawweight. However, Jędrzejczyk’s reach, volume striking and footwork are the difference in this fight. The Polish star will hit frequently and quickly, as she always does, and Waterson won’t be able to keep up.

Petela: This will be the second consecutive Polish striking standout that Waterson has faced — she defeated Karolina Kowalkiewicz in Philadelphia in March. The former champ Jędrzejczyk presents a more difficult test for the “Karate Hottie” and one that won’t go Waterson’s way.

Even in her three losses, Jędrzejczyk hasn’t looked like she’s lost the skill that made her the long-reigning champion she was before dropping the belt to Namajunas. As my venerable colleague pointed out, it was an inflated ego that cost her the first fight against “Thug Rose” and by the rematch it was an improved Namajunas who retained her title over a very much still elite Jędrzejczyk.

Waterson isn’t a cakewalk and has looked great in her three-fight winning streak. We will see the best version of Waterson, but it won’t be enough to come away with a victory over Jędrzejczyk. This should be a fun main event that goes the distance in one of the best striking showdowns we have seen in UFC women’s strawweight history.

Kron Gracie submits Cub Swanson in one round. Over/under?

Petela: Over, but it won’t take more than two rounds.

Swanson is 35 years old and on a four-fight skid. He’s clearly on the back nine of his career. Swanson is a black belt in Brazilian Jiu-Jitsu under Rigan Machado and a black belt in judo, but he has been susceptible to submissions throughout his career, especially in the last few years. Swanson has been submitted seven times, including four times in his last 10 fights and twice during his current four-fight losing streak. That doesn’t bode well going into a match-up with one of the best grapplers on the planet who just so happens to be the son of the greatest BJJ player of all time, Rickson Gracie.

Kron is largely one-dimensional, but his striking is ever improving under the tutelage of Nate Diaz. He will be able to nullify the unique striking attacks offered by Swanson. Don’t be surprised if you see him close the distance using the old school “Gracie Stomp” to force the fight into close quarters and ultimately to the mat, where he will slice through Swanson like a hot knife through butter.

Huntemann: Swanson’s best days really are behind him, and this fight clearly screams “gatekeeper” for him. By virtue of Swanson’s toughness and willing to fight anyone, he is a good test to see if Gracie is ready for the upper echelon of the UFC’s featherweight division. Given his last name, we know how dangerous of a fighter Gracie is. He passes this test with flying colors and may end up just another fight or two away from possible title-shot consideration. Between Kron’s success thus far in the UFC and Neiman Gracie’s success in Bellator MMA, the new generation of Gracies are doing their family namesake proud.

Miguel Baeza — do we need to know this name?

Huntemann: First off, how can you not love a guy whose nickname is “Caramel Thunder”? The dude is hitting it out of the park in the moniker department. Also, all but two of Baeza’s seven pro fights to date ended in an early knockout. The UFC is a different beast from the regional MMA circuit, but any fighter who steps onto the big stage with that kind of resume under his belt definitely deserves a closer look.

Petela: The undefeated prospect takes on Hector Aldana, who has struggled on the big stage after getting off to a hot start on the Mexican regional circuit. This should be a showcase for Baeza and a fight where he impresses fans. It’ll be the start of his journey as he slowly makes his way to contender status at welterweight. The 27-year-old is definitely a guy to keep a close eye on over the coming months and years.

Petela: The flyweight scrap between Deiveson Figueiredo and Tim Elliott.

This is Elliott’s first fight in nearly two years after winning his bantamweight debut over Mark De La Rosa. He returns to 125 pounds and takes on a very dangerous Figueiredo, who has only one setback in his career, which came to Jussier “Formiga” da Silva. Figueiredo has finished 14 of his 17 career wins, including nine by knockout and five by submission. This should be a fun scrap and a good showcase of the talent in the suddenly resurgent flyweight division.

Huntemann: A solid choice. Anytime Figueiredo or Elliott appear on a card, it’s a fight you’ll want to watch. The prelim card bout between Marvin Vettori and Andrew Sanchez is another one to check out.

Vettori gave new UFC middleweight champion Israel Adesanya all he could handle when the pair fought a couple years ago. Sanchez has only lost twice in nine combined official and unofficial bouts under the UFC banner. He recently rebounded with two solid wins after losing back-to-back bouts in 2017. With a good showing here, Sanchez can continue climbing toward the contender status that many people think he still has the potential to achieve.

Huntemann: As far as Fight Night cards go, I guess this one isn’t terrible. It has a great main event that is a probable title eliminator, at least. In celebration of the fact that fall weather has finally arrived in my neck of the woods, I propose you enjoy this card with the quintessential fall beer: Samuel Adams Octoberfest. It’s my beer of choice when the weather finally cools down and the leaves start to change, so I reckon you would enjoy having this on hand as well.

Petela: Not a bad choice, but (spoiler alert) I’ll save that for the upcoming Boston event. Fall is definitely here in the Mid-Atlantic, so I’ll pair this card with my favorite fall beverage as well: Dirty Apples. It’s an apple-cinnamon flavored whiskey from Twin Valley distillers, which my colleague should appreciate since its brewed right in Rockville, Md. I recommend viewers find their local distillery’s autumn whiskey to sip on while enjoying this fight card. Both the whiskey and the fight card will sneak up on you in impressive fashion.