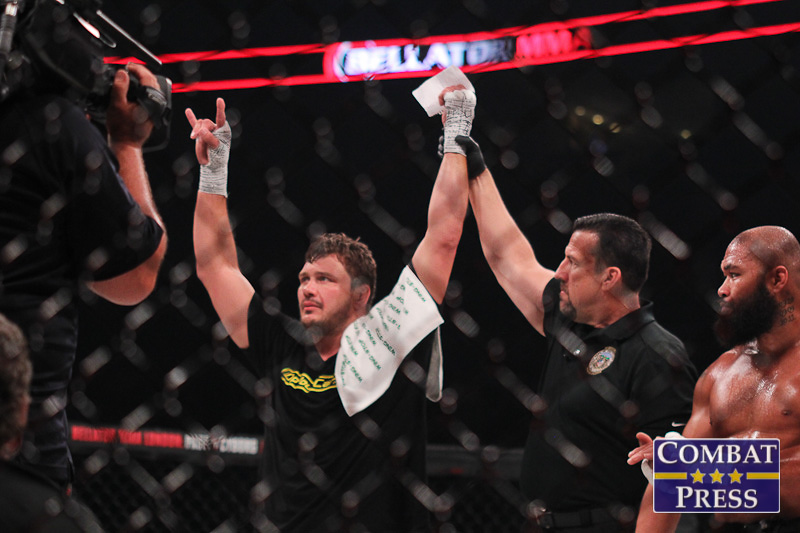 The next step in the Bellator Heavyweight Grand Prix takes the promotion to the Mohegan Sun Arena in Uncasville, Conn. This will be the third fight of the quarterfinal round of the tournament, and the match-up had two former UFC veterans going head-to-head.

Roy Nelson makes his sophomore appearance for Bellator. “Big Country” looks to secure another knockout victory when he goes up against fellow UFC veteran Matt Mitrione. This will be the second go-around for these two. Nelson won their first battle via knockout on the main card of [i]The Ultimate Fighter 16[/i] Finale in 2012.

Mitrione is considered one of the favorites to win the tournament. He has won his first three fights in the Bellator cage. Mitrione is coming off a victory over perhaps the greatest heavyweight of them all, Fedor Emelianenko. Meanwhile, Nelson’s last fight, which took place at Bellator 183 in September, resulted in a victory over Javy Ayala.

The co-headliner showcases some of Bellator’s homegrown veterans. Patricky “Pitbull” Freire will face fellow lightweight contender Derek Campos. These two men have hovered around the top of the division while consistently threatening for the title. Freire and Campos fought once before at Bellator 117, where the Brazilian emerged the victor with a second-round knockout of Campos.

Former Bellator light heavyweight champion Liam McGeary makes his return to the cage against Vadim Nemkov. McGeary is coming off a submission loss to Linton Vassell. This will be Nemkov’s second appearance under the Bellator banner. In his promotional debut, Nemkov knocked out Philipe Lins at Bellator 182.

The preliminary card airs live on Bellator.com at 7 p.m. ET on Friday, Feb. 16. The main-card action kicks off on the Paramount Network at 9 p.m. ET.

Matt Mitrione and Roy Nelson defected from the UFC, and now they land in Bellator’s big heavyweight tournament. Is Nelson capable of defeating Mitrione and proving that he’s still a borderline top-10 heavyweight? Will either of these men make the UFC regret losing them?

Mitrione is a top pick to win this tournament. He is far and away the highest-ranked heavyweight on the Bellator roster. That being said, Nelson has every chance to win this fight.

Mitrione has surprisingly been rocked a few times in his Bellator tenure. His fight with Carl Seumanutafa is a perfect example. Mitrione should have walked through Seumanutafa, but Seumanutafa caught him early in the fight and knocked him down. Seumanutafa is a powerful fighter, but doesn’t possess as much knockout power as Nelson.

Nelson likes to wing his right hand in there and rely on it as the entirety of his game plan. If he lands even one, it’s over. No questions asked. Mitrione can’t fall into Nelson’s trap. Mitrione needs to circle away from the right hand and take Nelson into deep waters. If Mitrione depletes Nelson and makes those right hands come in slower, then Nelson’s strikes become more predictable and Mitrione can simply move away. Nelson still has a high-level grappling game, but he has moved far away from that background in his later years in the sport.

The UFC won’t regret losing either of these men. The company has a pretty stable crop of guys at heavyweight and essentially has a monopoly on the division. Bellator’s ranks are thin and, as this tournament shows, the organization is forced to rely on guys from a lighter weight class to help fill up even an eight-man bracket. Heavyweight isn’t deep outside of the UFC, but the UFC has done fine without Mitrione and Nelson so far, especially with the addition of guys like Francis Ngannou. The UFC even retained the services of Alistair Overeem. Mitrione will shine in Bellator, but the UFC won’t be too upset.

As highly as I think of the skill set of Campos, I believe Freire will indeed put on a repeat performance.

Freire is one of the better lightweights on the Bellator roster. The Brazilian has proven this time and time again. He is coming off victories over Josh Thomson and former UFC lightweight champion Benson Henderson. All of Freire’s losses come against some of the best fighters Bellator has ever had — Michael Chandler, Eddie Alvarez and Marcin Held. His record is much like his brother’s, and they both have floated around the top of their respective divisions for quite some time. This longevity is extremely impressive.

Campos is coming into this fight on his own winning streak. He’s claimed victory in his last four fights. In this span, he has two knockout victories. His last two wins came against tough veterans Brandon Girtz and Derek Anderson.

This won’t be a blowout fight in favor of Freire, but it will be a fast-paced, drawn-out battle between two solid veterans. Freire likes to make fights into brawls. Campos has some knockout power, but he doesn’t typically fight in a brawling style. He prefers a more technical approach to his striking.

Their last fight was almost four years ago, and both fighters have grown since then. Freire ended the fight with a knockout, but this time we’ll likely see a fight that goes the distance. Freire will outstrike and outgrapple Campos to take a decision victory.

The Bellator 194 main card features battles pitting Heather Hardy (1-1) against Ana Julaton (2-3) and Tywan Claxton (1-0) against Jose Antonio Perez (0-1). Is Bellator jumping the gun by putting such inexperienced prospects on the main card, especially in the case of two sub-.500 fighters, or should the organization embrace this approach more often in the future?

To throw one of these prospect fights on the main card is one thing, but this does seem a little excessive. The cards that contain one of the Heavyweight Grand Prix fights are otherwise of the more watered-down variety from Bellator.

Both Hardy and Claxton are future fighters to watch, but they’re not quite there yet. Yet, it’s a good thing for both of them to get a shot on the main card. It can give them an opportunity to build up their profiles and their status among fans. This will pay dividends in the future for when both of these fighters are once again on the main card. Then, we’ll be talking a different story.

This isn’t the first time Bellator has done this. Michael “Venom” Page fought a bunch of mismatched opponents on the main card to showcase his knockout ability. Bellator isn’t the UFC, but people fail to realize this sometimes. Bellator plays by a different set of rules. The organization doesn’t have nearly the depth of the UFC, so there are some inexcusable fights — the “legends” fights; guys with undefeated records facing fighters who have two times as many loses as they do wins — but Claxton and Hardy are fighters Bellator is trying to make an investment in for the future.

To grow this investment, the company has to give these inexperienced prospects some exposure. Really, they aren’t always that inexperienced either. Hardy was a professional boxer. Claxton was a collegiate wrestler. They’ve both competed at an extremely high level in the past. They may be inexperienced in terms of MMA, but both competitors have experience in highly watched events outside of this field.

Claxton is coming off an impressive flying-knee knockout in his professional debut. Hardy has the power to knock down anybody at her level. Bellator is hoping both fighters make the most of those talents and put on show-stopping performances on the main card. Maybe it pays off. Something tells me it will.

The light heavyweight battle between Liam McGeary and Vadim Nemkov.

This is the only main-card fight we didn’t talk about, but it is well worth discussing. McGeary has been through a lot of ups and downs since losing his title to Phil Davis, who subsequently relinquished the crown to Ryan Bader. McGeary has fought twice since then. His most recent fight didn’t go the way McGeary wanted, though, and he lost to Linton Vassell. McGeary needs to bounce back in this fight after being on the shelf for the last nine months and recovering from an injury that kept him out of a scheduled fight at Bellator 185 in October.

Nemkov is going to be a tough opponent for McGeary. Nemkov enters this fight on the heels of a knockout victory over Philipe Lins in August.

Both guys are known for finishing their opponents, but McGeary needs a win bad. Expect him to get the knockout in one hell of a fight.