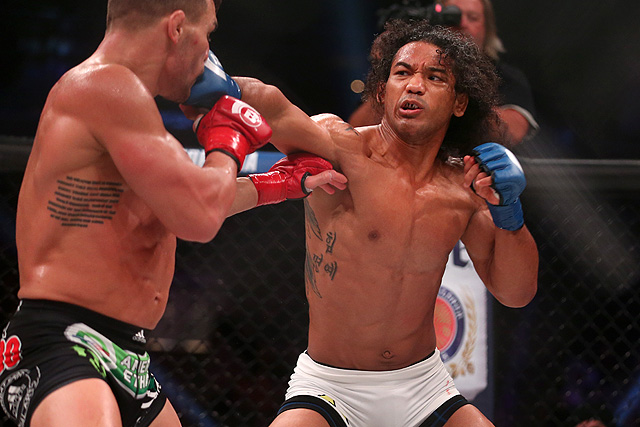 The big knock on Benson Henderson is his inability to finish big fights. The first time he met Michael Chandler, this issue led to a split decision and a loss for the former UFC champion. Now, at Bellator 243, Henderson has a chance for redemption.

Since their clash at Bellator 165 in late 2016, Henderson has gone 4-1. His only loss was also a split decision, which came in his very next fight after the loss to Chandler when Henderson met Patricky Freire. He snapped his two-fight skid with four straight wins. His victims included Roger Huerta, Saad Awad, Adam Piccolotti and Myles Jury. Henderson’s only finish came in the Huerta fight.

Meanwhile, Chandler suffered an ankle injury in his very next fight and dropped the Bellator lightweight strap to Brent Primus. He returned in 2018 and marched through three opponents, culminating in a rematch with Primus in which Chandler regained the belt. Chandler’s first defense of the championship didn’t go so well, however, and he lost the title to Patricio Freire. He has since rebounded with a victory over Sidney Outlaw. Chandler has only seen the scorecards twice since his first encounter with Henderson.

Fans can expect another all-out war when Chandler and Henderson take to the cage once more for the headliner of Bellator 243’s four-fight main card.

In the co-main event, former UFC heavyweights Matt Mitrione and Timothy Johnson collide. Mitrione is on a two-fight skid that includes losses to Ryan Bader and Sergei Kharitonov. Johnson found success in his last fight, where he spoiled the previously unblemished record of Tyrell Fortune.

Bellator 243 takes place on Friday, Aug. 7, at the Mohegan Sun Arena in Uncasville, Conn. The preliminary card airs live on DAZN at 6:45 p.m. ET. The main card follows on DAZN and the Paramount Network at 10 p.m. ET.

The first time Bellator 243 headliners Michael Chandler and Benson Henderson met, Chandler walked away with a split-decision win. Will their rematch have a more clear-cut outcome?

Probably not. The pair’s first fight was a back-and-forth war. Chandler was aggressive in the first round, but he also came close to suffering a submission loss in the fifth frame. Henderson is a decision machine who rarely runs away with the victory when tasked with an elite opponent.

It’ll be interesting to see if Chandler brings the same aggression that we saw from him in the first round of the Bellator 165 bout with Henderson. He suplexed the UFC veteran at one point, and he went for the choke finish. Whether those big expenditures of energy cost him later in the fight, it’s hard to say. Henderson came back to win at least a couple of rounds, but the former UFC champ couldn’t quite get the job done.

Henderson’s inability to finish opponents at this level often leads to tight fights. In addition to Chandler, he’s seen split scores against Frankie Edgar, Gilbert Melendez, Josh Thomson, Jorge Masvidal, Patricky Freire and Adam Piccolotti. If he fights his typical fight, fans are in for an excellent sequel with the trademark Henderson razor-thin decision. Given Chandler’s style, Henderson is unlikely to be the one to come out on top.

Matt Mitrione has not won a fight since early 2018. Now, the heavyweight is set to lock horns with fellow UFC veteran Timothy Johnson. Can Johnson put another blemish on Mittrione’s record?

Anything can happen here. Mitrione has not won since a majority verdict over Roy Nelson, but he’s also scored victories over the likes of Fedor Emelianenko, Derrick Lewis and Phil De Fries during his career. Johnson is also an enigma. He has suffered losses to Junior Albini and Jared Rosholt, but he almost beat Alexander Volkov and did score wins over Marcin Tybura and Tyrell Fortune.

These guys have plenty of knockout finishes on their respective resumes, but they’ve also been thumped on numerous occasions. Johnson, in particular, was finished via strikes in less than three minutes each by Vitaly Minakov, Cheick Kongo and the aforementioned Albini. Mitrione has been known to land some big blows and finish fights with ground-and-pound, so it wouldn’t be a shocker to see the 42-year-old former football player do the same here.

Johnson, on the other hand, managed such a finish in his recent fight with rising prospect Fortune. If he can rock Mitrione or score a takedown and land in top position, then Johnson could also rain down a ground-and-pound barrage for the finish.

Age could be a big deciding factor here. Johnson is still just 35 years old, whereas Mitrione is now firmly in his forties and lacking a recent win of any kind. In what amounts to a coin toss, he could just come out as the victor in this one.

The obvious choice would have been the clash between Adam Borics and Derek Campos, but then Campos withdrew. While it’s not quite on par with that fight, Borics’ new match-up against Mike Hamel isn’t a bad option either.

Hungary’s Borics finally stumbled in his last fight to suffer his first pro defeat, but it came against Darrion Caldwell, a solid wrestler and former Bellator bantamweight champion. Prior to that setback, Borics had managed wins against such notables Aaron Pico and Pat Curran. He’s just 27 years old and capable of doing a lot of big things inside the Bellator cage. Perhaps the Caldwell fight will turn out to be a learning experience that leads Borics to improve certain areas of his game.

Borics will have an opportunity to shine against Hamel. The Arizona-based fighter started off with a perfect mark through five fights, but he’s hit a rough patch in which he’s won just two out of his last five bouts. This isn’t quite the test that Borics would have seen against Campos, but it should provide an exciting finish for the Hungarian.