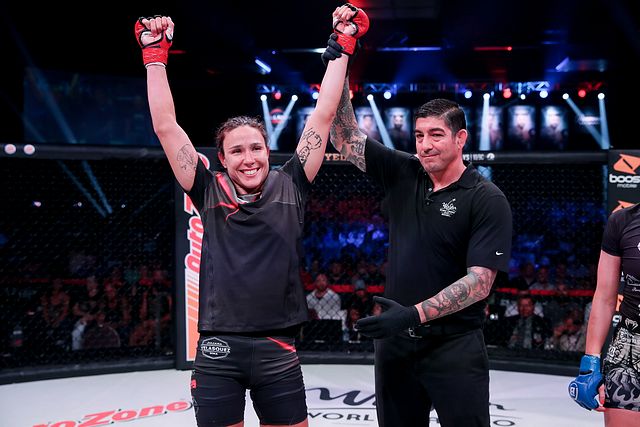 After taking off two weeks, Bellator MMA returns with a fight card sure to impress. Bellator 262 features a variety of prospects, veterans, and fighters looking for their breakout moment. The lineup includes a women’s flyweight championship fight, the return of Tyrell Fortune, and Johnny Eblen’s next step toward a title shot.

Since winning the women’s flyweight title in late 2017, Ilima-Lei Macfarlane had been a force to be reckoned with, defending the belt four times in total. Championship status puts a major target on a fighter’s back, though, and it was only a matter of time until someone was going to stop the flyweight queen. That someone ended up being Juliana Velasquez.

At Bellator 254, Velasquez became the Bellator champion. She defeated Macfarlane in a grueling five-round decision. Yet, Velasquez has to defend the belt at least once to prove she’s worthy of running the division. She will have that opportunity on Friday when she takes on the always-dangerous Denise Kielholtz.

In the co-main event, Fortune looks to continue his journey through the heavyweight rankings. The task will be easier said than done, however, as Fortune is matched up against UFC veteran Matt Mitrione.

Despite registering his last win in 2018, Mitrione has the advantage of UFC experience. The former NFLer has wins over Kimbo Slice, Joey Beltran, Derrick Lewis, Roy Nelson and Fedor Emelianenko. Unfortunately, those days are in the past. Fortune comes in as a huge betting favorite (-350) against Mitrione.

Three additional fights help to round out the main card for Bellator 262, which takes place at the Mohegan Sun Arena in Uncasville, Conn. The festivities kick off with five prelim fights on YouTube at 6 p.m. ET. The main card follows on Showtime at 9 p.m. ET.

Juliana Velasquez is set to make her first defense of the women’s flyweight strap. How will she fare against challenger Denise Kielholtz?

Velasquez’s first defense comes seven months after her title-clinching win. She is matched up against Bellator’s No. 3-ranked contender in Kielholtz, who has gone on a winning streak worthy of a title shot.

Velasquez has always had the potential to be a world champion. Originally turning pro in 2014, Velasquez established a 5-0 record before signing with Bellator in 2017. Her signing has been one of the best decisions Bellator has made for its women’s divisions.

With a background in Brazilian Jiu-Jitsu and four career wins by some form of knockout, Velasquez has a well-rounded fight style that continues to allow her to dominate any opponent put in front of her. She now holds an 11-0 record.

Kielholtz was initially a pure kickboxer for Bellator, but she has now transitioned to MMA. Her decision has paid dividends. Unlike Velasquez, Kielholtz has faced defeat in the past. She made her Bellator MMA debut in late 2017, finishing her opponent with a scarf-hold armbar. From there, she ended up going 1-1 in her next two fights. Kielholtz bounced back from the lone loss with four straight wins, all by finish. With everything starting to click, Kielholtz now has the chance to upset Velasquez and further her legacy.

This is an interesting stylistic pairing, at least on paper. Kielholtz has a kickboxing background that continues to be a crucial element in her fights. She has also developed a ground game that has kept her out of trouble. However, Velasquez is dangerous wherever the bout goes.

Kielholtz needs to keep this fight standing and take advantage of her superior striking abilities. If the action ends up on the ground, then she might have trouble with Velasquez’s sneaky submissions.

Velasquez is the heavy favorite for a reason. She should be able to control the pace and successfully defend her belt.

Matt Mitrione has not logged a winning performance since early 2018. Will he serve simply as cannon fodder for rising prospect Tyrell Fortune?

After wrestling for Grand Canyon University and Team USA, Fortune decided to pursue a career in MMA. Nobody knew what to expect when he made his debut with Bellator in 2016. He impressed with a first-round ground-and-pound finish and produced the same result in his sophomore appearance. Nearly five years later, Fortune has evolved into a potential world champion.

Mitrione has had quite an illustrious sports career of his own. Before MMA, Mitrione was a standout football player who made it all the way to the NFL after his days at Purdue. He made his foray into MMA on The Ultimate Fighter 10. Although he did not win the competition, Mitrione did end up getting signed by the UFC.

Ultimately, Mitrione’s tenure in the UFC spanned 14 fights. He fought some of the best heavyweights in the world and had some memorable highlights along the way. His Bellator campaign started wonderfully, with Mitrione winning his first four fights with the company. However, he began to struggle with the best Bellator heavyweights and has now lost three straight fights.

If Mitrione wants to beat Fortune, he will have to make absolutely zero mistakes. In the past, Fortune has thrived on being patient and setting up takedowns. When Fortune gets the fight to the ground, it tends to be a long night for his opponent.

Mitrione may have troubles in this fight because of his deteriorated athleticism, which should make it impossible for him to stop Fortune’s grappling. Fortune will most likely grind his way to another ground-and-pound finish.

Over the past few years, Bellator has thrived on signing the next generation of prospects. Eblen is a perfect example. His name might not be familiar quite yet, but he has a massive amount of potential.

Eblen started with wrestling to make his name in the combat-sports world. After competing at the University of Missouri, Eblen moved on to MMA. He has trained at the American Top Team gym with some of the best fighters and coaches in the world.

Eblen turned pro in 2017 and started his career with four first-round finishes, three by way of strikes. The only thing stopping Eblen from making it to the big show was the idea that he might be too one-dimensional. He debunked those theories with clean combos, heavy leg kicks, and patience throughout his regional fights. Bellator liked what they saw and signed him in early 2019.

Since then, Eblen has been everything the promotion could have wanted. Despite not getting a finish, Eblen racked up three solid wins as he built up his confidence. Two months ago, he had his breakout moment at Bellator 258 against Daniel Madrid. Eblen showed Bellator fans he is not just a wrestler with a first-round knockout from a left hook and hammerfists. With little damage taken, Eblen insisted on a quick turnaround.

Eblen is now ranked fifth in the welterweight division by Bellator, but he needs to be ready for his underrated upcoming opponent Travis Davis. Eblen will clearly have the advantage on the ground, but nobody’s chin is untouchable. Davis has a boxing background, and he’s not afraid to use it in MMA.

Unfortunately for Davis, he has been matched against one of the toughest fighters in the division. Eblen has the credentialed wrestling background to drown an opponent and the powerful hands to put them to sleep. Wherever the fight goes, Eblen should be able to dominate Davis. Bellator 262 will serve as the latest display of Eblen’s championship potential.

The heavyweight clash between Ronny Markes and Said Sowma.

Both fighters are on the hunt for their first Bellator win, but only one can come out on top. The unpredictability of a heavyweight scrap provides the main reason to watch this fight. At the end of the day, all it takes is one punch to put the heavyweight division on notice.

Quietly working his way through the regional scene, Sowma has put on some impressive performances. His first pro loss came to Bellator’s No. 6-ranked heavyweight Steve Mowry before Mowry had joined the organization. Sowma bounced back nicely to the tune of six straight wins, including three by knockout and one via submission. His 6-1 record led to a Bellator contract, but Sowma lost to Bellator 262 co-headliner Tyrell Fortune in his promotional debut.

Sowma has tons of potential at heavyweight and may have just not been ready for a fighter like Fortune. He now has the opportunity to get his first Bellator win and make a statement to the heavyweight division.

Markes has been around for a while and seen everything the fight game offers. His pro campaign kicked off in 2007, and Markes has seen action with the UFC, the Professional Fighters League, the World Series of Fighting, M-1 Global, and many more. Along the way, he has fought some of the best fighters across three weight classes. Anything is possible for the 33-year-old Markes in Bellator.

The Brazilian signed with the league in 2020 and found himself against a tough opponent in Linton Vassell. Markes lost the fight in the second round and failed to impress Bellator fans. However, we did not see the best version of Markes that night. When he is at his best, Markes can be a serious problem in the Bellator heavyweight division.

With the opportunity to get their first Bellator win, both fighters will feel a need to perform at Bellator 262. They each have solid cardio and tend to move more like light heavyweights. If the majority of this bout happens on the feet, then it could end up as the “Fight of the Night.”