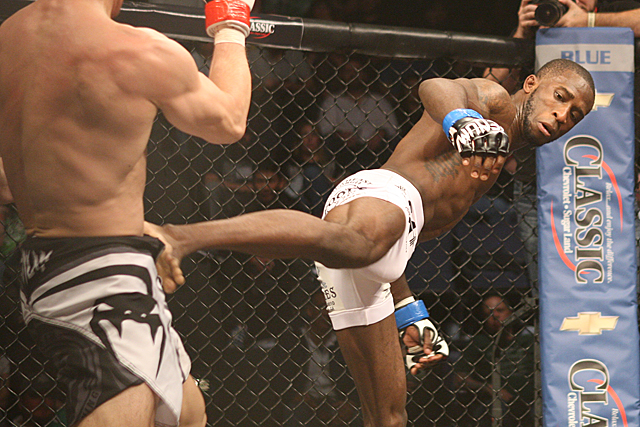 It’s hard these days to find a millennial with an old-school traditional lifestyle. Today’s millennials are more about communal living, shared work spaces, electric cars, and trading in suits for sweatshirts. However, there is an occasional diamond in the rough who still holds true to his traditional upbringing.

Cee Jay Hamilton is a professional fighter with a background in wrestling. He’s a dog lover and a dedicated boyfriend. These items alone do not really set him apart from every other 30-year-old. However, while Hamilton and his girlfriend, Peyton, maintain a long-term relationship, it is anything but modern.

“We’ve been together almost four years, but I told her we’re not going to live together until we get married,” Hamilton told Combat Press. “My late grandmother told me that when you get married, you want to have something to look forward to. Let’s say we get married, and I’ve been living with her for eight years [before marriage]. When we come back from the wedding, we would just be going straight home — nothing really changes. When we get married, I want to go to our new home.”

By the time most couples hit their thirties, this is the last thing they are thinking about. Most people are so deep into career and life that, in this fast-paced digital world, people are just looking to stay ahead of life’s checklist. This Georgia native, on the other hand, is taking life one step at a time.

“I have eight dogs. I love it, dude. I told my mom that she’d rather me have eight dogs than eight kids. It’s awesome, man. Me and my girlfriend rescued a couple, and we have some of our own, so it’s not even like we’re breeders. We’ve gotten rid of some, and we’re very particular about who they go to. I hate people that have dogs outside on a tree, all day, every day, rain, sleet or snow. I have four at my house, and she has four at her house, and we literally live right across the street from each other. We have two acres of land, and they can run.”

“I do this because I love to compete,” Hamilton explained. “I’ve never shied away from competition. I’ve always been a competitor. I was a two-time national champion college wrestler. With all that wrestling has done for me, there was not much more to go for after that, unless you’re trying to go to the Olympics, and that‘s pretty ruthless. My best friend was begging me and begging me and begging me — and even my brother — to try it out. A guy I wrestled with was starting a class, so I tried it out and I’ve been hooked ever since.”

Hamilton has spent some time in both the bantamweight and flyweight divisions. His most recent fights took place under the Titan FC and Valor Fights banners. He really prefers the 125-pound division, though.

“Most of my training is at my home gym, Contemporary Martial Arts in Hartwell, Georgia,” Hamilton explained. “But, I travel to Revolution Mixed Martial Arts in Inman, South Carolina. That’s where Justin and Jared Scoggins train. I also train at Straight Blast Gym with Adam and Rory Singer. We’ve got a couple guys out there.”

Legacy Fighting Championship was another promotion where Hamilton spent some time in the past, so it only makes sense that his next fight takes place under the newly formed Legacy Fighting Alliance promotion this Friday night. LFA 8 will be held at the TD Convention Center in Greenville, S.C. Hamilton headlines the card against Michigan’s Jesse Bazzi in a flyweight affair.

Bazzi is coming off a win over Hamilton’s training partner, Jared Scoggins, just two months ago, so it will be a bit of a redemption fight for Hamilton. Bazzi is 6-1 as a pro, and has a long list of submissions across his combined pro and amateur careers.

“My manager, Oren Hodak, he works a lot with Legacy, and they told him back in February that they would be coming out sometime in April, so I’ve been training, training, training,” Hamilton said. “We tried to get this guy Rodrigo Lima, who said he wanted to fight me, but we couldn’t get in contact with him. We kept trying to contact him, and he wouldn’t answer our calls. Eventually, Bazzi came out and he took the fight. It’s crazy, because he just fought Jared. It’s awesome to be able to headline the first televised fight in South Carolina.

“[Bazzi]’s a southpaw. He’s tough. He’s good at boxing. He’s good on the ground. He’s a good fighter. I don’t look over anybody, and there are things that can be of concern, but I’m not worried. I’m going to go out there, do what I do, and get my hand raised.”

Hamilton was so impressive in his early career that it has been difficult for him to find opponents. In 2014, he was worried it might take a year between fights.

“I’ve only been pro for about three and a half years, almost four years, but within that time span of nine months, I couldn’t get a fight, because nobody would fight me,” Hamilton said. “I took a couple of early losses, but I know now, my mindset has changed drastically. I’m always evolving, whether it’s a different way to throw a jab or a whole new complete move. I’m always trying to soak up everything I come across. I’m always learning, and that’s what’s scary about it — I haven’t even hit my peak yet. This isn’t even the top of my game yet, and I feel great.”

On Friday night, Hamilton will get his chance to perform on the biggest feeder promotion to the UFC and Bellator. As individual promotions, LFC and RFA were already two of the top feeders, but now that they have merged into the LFA, it is, by far, the biggest stage in the sport for showcasing new talent. With the recent season of The Ultimate Fighter reality show bulking up the UFC’s flyweight division, Hamilton is in the perfect position to put on a dominant performance.

“I’m exciting, man,” said Hamilton. “I keep you in the fight. I bring a lot to the table. I have charisma. I have style. When I walk down the stage and into the cage, I keep you interested. I do what these other guys don’t do, and I put on a show every time.”

Hamilton would like to thank all of his coaches and training partners, his girlfriend, his family, his friends, his fans and his sponsors. Follow Cee Jay on Twitter: @CeeJizzle125
Advertisement